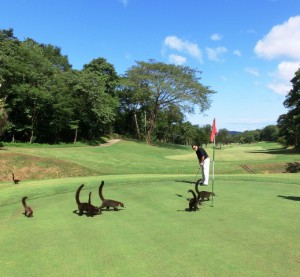 Getting close to nature
on the No. 2 green

When asked about my favorite course after 60 years of golfing, I sometimes say, “The next new one that I play.” However, when pressed on the issue to name just one, I usually say, “Garra de Leon Golf Course in Costa Rica.” I fell in love with the Robert Trent Jones II design when I spent 30 months there as the director of golf from 1998 to 2000, playing it 500 times.

It’s now called the Reserva Conchal Golf Club at the Westin Golf Resort & Spa and features a slightly different routing on the back nine with the addition of two new par 3s after a beach club was added in 2008 This resulted in the elimination of the par 4 16th where the green was only yards away from Playa Conchal and the old tees for the par 3 17th.

After being away for 12 years, I got a chance to see the changes on a recent visit and liked the new par3s, especially the 17th. The 15th goes back into what was a wooded area and features a long narrow green, which can mean the difference in two clubs depending upon the pin position. The 17th features an elevated tee from a different direction. It’s longer and you do need to make sure to take enough club and hit your approach solid to clear the water. I didn’t on my first try, but did hit the green the next time, both from the white tees at 151 yards. Playing from the blues at 187 yards, I used a hybrid and found the bunker. A late afternoon shower prevented me from finishing.

The only other change was that a new tee was added on the par 5 16th, formerly the 13th where you need to avoid a large bunker complex on the right side for your second shot. The other holes were the same with the old 15th now the 13th.

The par 5 18th remains the same, a dogleg left with water all the way down the left side, making going for the green in two a risky venture. However, after a good drive from the whites at 480 yards, I found myself with only 210 yards to the center of the green and took out my 3-wood, hitting it to within 10 feet, but missed the eagle chance. I’ve made just as many birdies and a lot more pars taking the safer route to the right for a wedge to the green. 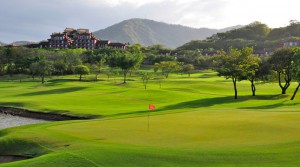 The first 12 holes remained unchanged except for the 165 condos that had been added on the sides of the fairways. I never got to play Nos. 4-9 as the course was hosting a junior event for 50+ players that weekend. I did drive out to see that the area behind the 4th green did provide an even more spectacular view of the Pacific Ocean after some trees had been eliminated. Director of Golf Carlos Rojas now calls this par 5, measuring 489 to 585 yards, the signature hole.

I always felt No. 12 fit this bill. The tee shot from the back tees at 395 to 420 yards was still intimidating as you hit to a fairway 200 feet below with trees and out of bounds to the left and a hazard down the right side. Both Rojas and I hooked our tee shots into the woods. The hole is a lot easier from the whites down the hill at 322 yards where I hit a hybrid and a short iron to reach the green.

From the back tees, the course can be stretched to more than 7,000 yards. I have played from there, but now that I’m older and have lost distance, the whites at 6,023 yards or the blues at 6,558 yards are better choices as they are for most resort guests. Jones does provide safer routes and bail out areas around some greens to allow players to avoid water or bunkers and have chances to save pars with good chips.

The course is operated separately from the hotel from a well-stocked golf shop located just under the open-air lobby. Green fees range from $85 to $150, well worth it since all your food, including 24-hour room service, and drinks are included at the all-inclusive Westin.

The resort resembles a modern tropical village with 39 Spanish-style villas, each housing eight nice suites, plus an additional eight even larger suites down by the beach just as it did when I was there. In addition, there is now an additional 100 rooms in the Royal Beach Club, where guests upgrade if they wish to get added services like a butler and a private pool for adults only. The suites are spread out over a big area, but guests can take shuttles to get to the eight restaurants, pool and beach if they don’t enjoy walking.

There are some pricey tours available for guests wanting to get away to enjoy other activities, but the Ticos on the public beach offer some more affordable options like a $20 massage that one guest on the shuttle raved about.