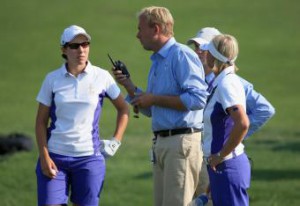 Only the most experienced rules officials, serving as referees, need to be on center stage for an event like the Solheim Cup, watched all over the world. Yes, the rules are sometimes complex, but taking 27 minutes to make a decision, which turned out wrong, is just something that shouldn’t happen.

In a first day four-ball match between Suzann Petterson and Carlota Ciganda against Stacy Lewis and Lexi Thompson that was all square on the par 5 15th, everything came to a halt after Ciganda hit her second shot into a hazard. Thompson and Lewis had putters in hand waiting.

Apparently, taking a drop within two clubs of where it entered the hazard, wasn’t an option Cigando wanted to use. Even a range finder entered into the discussion when Ciganda considered going equidistance on the opposite side of the hazard, another option. Lewis was miffed that her opponent got the benefit of knowing the exact yardage, but the officials noted that this became public knowledge after it was done, which was correct. Cigando didn’t play from that spot. Instead after getting the OK from the referee, she finally elected what she thought was another option, going back and keeping the spot equidistant from the original position between her new location and the hole. Of

Even with the one-stroke penalty and playing from a sidehill lie, Ciganda wedged to 15 feet from the pin on the back fringe and made the putt for a par, earning a half when Thompson took three from 50 feet and Lewis missed her birdie putt. What looked like a sure win for the Americans ended in a tie. Then Petterson birdied the next hole and the Europeans won the match, 1 up.

“It was the length of time it took to make the decision that bothered be,” American captain Meg Mallon said.

It took the rules committee nearly three hours to issue a statement admitting that Ciganda had been allowed to hit from the wrong spot, an error that could not be corrected since the referee’s decisions are final.

US vice captain Dottie Pepper noted that she felt things seemed odd when she and Lewis were asking the referee to talk them through the process. “It was only after that discussion that it became apparent the ruling had been blown,” she said.

Checking with my cousin Eldon Tarver, a volunteer rules official with the Texas Golf Association, to clarify what he had heard from his fellow officials, he noted that all were aware that Cigando really didn’t have the option of going back to keep the spot equidistant from the original spot between her and the pin. That option only applies from the spot where the ball last crossed the margin of the hazard.

While not as much was mentioned about it, there was an even longer 31-minute delay when rules officials tried to determine where Christie Kerr and Bertriz Recari should take drops after hitting into a hazard on the 16th in a second day four-ball match. Evidently, one of the questions was who would have the honor, being farther from the hole.

Checking with my former tournament director with the Northern Texas PGA, Doug Hoffman, who now is tournament director of the Minnesota Golf Association, he pointed to a note in Rule 10 that says that the order of play is determined by the position where the original ball came to rest, not by another spot allowed under the rules.

Hoffman pointed to how rules official Gene Smith handled a similar rules situation in the 1991 Ryder Cup. Both Colin Montgomerie and Mark Calcavecchia hit their approach shots into the water hazard on the par 3 17th at the Ocean Course at Kiawah. It appeared one of the balls landed closer to the green than the other, but Smith used the point where the balls last crossed the margin of the hazard to decide who had the honors and it turned out to be the other player.

What happens if two balls are indeed the same distance away? That’s covered in the rules. It is determined by lot, like a toss of the coin. Sometimes when two players aren’t sure who is away, the referee can just make the judgment call himself. Or I’ve seen a referee use the flag stick to make the call.

There is an exception to Rule 10 for four-ball match play that allows partners to decide which one plays first. In another match, Paula Creamer decided to try her shorter putt on the same line as her partner Thompson first. Neither of the European players (Jodi Ewart-Shadof or Charley Hull) said anything, but one of the caddies said, “It’s good.” Evidently, European vice captain Annika Sorenstam instructed the caddie to do it. Officials later decided this was not a violation of the advice rule after calling the USGA, but asked the vice captains not to intervene in matches going forward. By a rule in four-ball match play, a player cannot go ahead and putt if the opponents have conceded the putt. If he or she does, then the side loses the hole. In this case, Thompson made the birdie putt without Creamer’s help. The Europeans reportedly apologized for the late concession call.

I can recall conceding a putt under similar circumstances in a Ryder Cup-style competition at what then was the Shores Country Club in Rockwall. My opponent got a little upset, wanting to bet me $100 that he could go ahead. I told him if he did his team would lose the hole. I was sure of the correct ruling, but did not want to take his money. His partner missed and I made my birdie putt to win the match.

In the 2000 Solheim Cup, Sorenstam holed a chip from off the 13th green, but opponent Pat Hurst pointed out that it should have been her turn as she was farther from the hole although on the green. The American captain Pat Bradley invoked the rule that allows opponents to have the other player try the shot again in the correct order. Sorenstam missed the second time and she and Janice Moodie lost 2&1 to Hurst and Kelly Robbins.