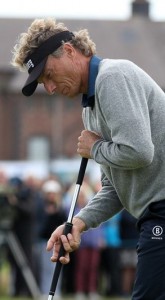 I’m getting tired of tv commentators, armchair rules experts and even some of the other PGA Tour Champions suggesting there is enough visual evidence that Bernhard Langer and Scott McCarron are guilty of breaking the “anchoring rule” in continuing to use their long putters.

Each golfer vehemently maintains that by holding their top hand away their body and keeping it away during the stroke, they have legally adjusted to the new rule.

“I’m certain I’m  not anchoring the putter and that my putting stroke is not violating the Rules of Golf,” Langer said.

“I’d like to emphatically say that I do not anchor my hand, arm or club against my body during my putting stroke,” McCarron said.

I agree with them and don’t feel they are intentionally holding the putter against their bodies. So do the PGA Tour officials.

The USGA also agreed when addressing the subject about a club touching loose clothing, saying it had seen no evidence of a player breaking the rule.

Frank Thomas, a former Technical Director with the USGA, suggested in a post written last year that the way the rule was explained and written introduced ambiguity, confusion, complexity as well as difficulty in monitoring that will inevitably led to disagreement and confrontation.

That’s exactly what has happened.

“When we introduce a questionable rule for possibly good reasons but not clearly explained, and it turns out to be worse than the perceived problem, then we need to take a new look at the anchoring rule and the objective for adopting it,” Thomas said.

He is a firm believer in the importance of simplicity and clarity of the rules.

His suggestion, one that as a rules official I like, was:

“The length of the putter shall be no longer than the shortest club in the player’s bag.”

Of course, Langer and McCarron would not like this as they are currently enjoying being the top senior putters and leading money winners.

Another suggestion for the rules makers is to just let players go back to using the long putters if they wish.