While not getting the attention as one of the top golfing destinations down south in Mexico, don’t 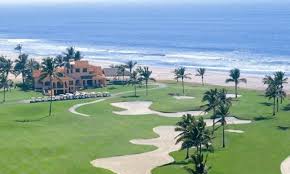 overlook Mazatlan, known as “The Pearl of the Pacific,” since the American dollar can get you a lot more here.

The featured golf attraction is Estrella del Mar, located on an attractive 900-acree oceanfront property just four miles from the airport on. It features six ocean-view holes and serves as the host of one of the Latin America Tour events, the Mazatlan Open.

Even better news for the average golfer is the fact that the management decided to make its Robert Trent Jones Jr.-designed course more user friendly by doubling the size of its one diminutive greens.

Director of Golf Jorge Corral said it wasn’t the complaints of the professionals that led to the renovation project. “They could spin the ball better than average golfers and keep their approach shots on the greens,” he said.

Some visiting golfers and even the members, many of them snowbirds from America who now make their homes in nearby condos for part of the year, did make mention of the small greens to Corral and the management.

When one of those visitors happens to be the President of the country, it carried more weight.

“When President Enrique Pena Nieto comes here and tells you they are too small, they’re too small,” managing director Brian Werner indicated, and Corral echoed his comment.

I got a chance to see the renovations in their final stages last November with most of the greens covered with Paspallum grass, one that is more salt tolerant, instead of the seaside Dwarf Bermuda that used to cover them. They rolled true and should me fine when the winter guests and touring professionals arrive.

When I finally realized that I was playing at sea level and the ball wouldn’t fly as far and saw the breezes coming off the ocean, I managed to hit the larger greens with more regularity, even going to the backside on several occasions when I hit two more clubs than I thought might be needed.

One piece of advice: if possible, schedule your tee time early in the mornings as the wind picks up in the afternoons, adding to your challenge.

Even with larger greens, the course is still challenging because of the ocean breezes on the six holes closer to the Pacific Ocean, 11 strategically-placed lakes and plenty of fairway and greenside bunkers, featuring beach sand.

Proof of how tough the course is for the touring pros? The course record is only 64 by Oscar Alvarez Columbia and the winning scores in the Mazatlan Open have ranged from minus 10 to minus 17.

It’s not easy for scratch amateurs either as the Mexico Golf Association course raters gave it a 76.8 rating from the back tees at 7,015 yards. From the blue tees at 6,453 yards, the rating is 73.2. It’s more player friendly from the whites at 70.8 and the silvers at 68.3

Precise tee shots to avoid water hazards and even some Palm trees (I counted 12 to the right of the No. 1 handicap fifth that can be stretched to over 450 yards) are required on the early holes, but give you a chance to get off to a good start before you get to the final stretch that can make or break a round.

“There are a lot of tournaments that have been decided on the closing stretch,” Corral noted, pointing to the final five holes where the ocean breezes are the strongest.

Green fees at Estrella del Mar are reasonable compared to other places in Mexico, $130 in the high season and $75 in the summer. Range balls and two bottles of water are included.

Starting in December, members and guests were able to get help with their games as the John Jacobs Academy opened one of its facilities at the resort.

The resort features a 47-room boutique hotel and 67 one-, two- and three-bedroom oceanfront condos and plenty of other activities such as a tropical bike ride, kayak adventures, surfing and even paddle boat lessons along with four miles of beach. One added activity that all guest should include is a visit to the turtle hatching sanctuary that has saved thousands of sea turtles from predators. The turtles are released as the sun goes down daily.

Visitors opting to stay closer to all the tourism activities in Mazatlan who may only want to play one round have two nearby options– the El Cid Country Club (green fees of $65 to $80) and the Mazatlán Marina Golf Course (green fees of $100).

I played them on a previous visit. El Cid features 18 holes built in the 1970s– the more demanding El Moro and the strategic Castillo– along with the Lee Trevino-designed Marina, which opened in 1999, while the David Flemming-designed Mazatlan Marina course, which opened in 2009, is resort friendly with wide fairways where mounds on the sides help keep balls in play.