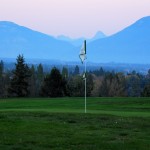 Golfers are always searching for a golfing

when they do it’s difficult to keep a hidden gem secret for very long. They have to tell others and the

word quickly spreads. It’s obvious that word is getting out about Montana’s Flathead Valley, framed by

Glacier National Park to the northeast, the Salish Mountains to the west, the Whitefish Range on the northern

rim and the Swan and Mission Ranges on the east, especially since Golf Digest named it one of the top

50 golfing destination in the world.

I would second the magazine’s description: “There’s perhaps no better place in the nation for

Of course, now is not the time to go as it’s cold up there, it’s not too early to make some plans for

a summer or early fall getaway.

While it requires a change of airplanes—Salt Lake City and Minneapolis/St. Paul are the two

a little more to get there, golfers will be surprised to find green fees very reasonable ($35 to $75 even in

high season), considering the quality of the golf courses. A lot of Canadians and Americans from neighboring

Association, a coop marketing effort of 10 public golf courses located within a 50-mile area of this

special corner of the world. Surprisingly, no two of these golf courses are really alike. Each has its own unique qualities. In fact, you’ll even find dramatic differences on the same course.

champion Andy North, features a front nine reminiscent of a links across the pond since it was built on

an old potato farm. The back 9 then drops down to play through the trees near the Stillwater River. The

par 4 No. 14 requires a drive through a narrow chute of trees over some marsh land and has to be one

of the most challenging holes. Big Mountain has the best bent grass greens that I’ve seen in a long time.

If you can’t make a putt, you have only yourself to blame. I made everything inside eight feet the day I

played and had a good round despite hitting just three greens in regulation.

different terrains—Buffalo Hill where it got its name, a river bottom near the Stillwater River and a

flatter bench top with numerous lakes adding to the challenge. The locals like it as evident from it

being named the best golf course in the valley seven straight years by the Daily Inter Lake newspaper.

Course, the first 36-hole facility in Montana, as the best ones around. The North features a more old

fashioned traditional look with tree-lined fairways. The original 9 was built in the 1920s and doubled as

an airport. It has been remodeled and lengthened over the years. The Lakes 9 was added to the Woods

9 in the 1960s. The South is shorter, but calls for more target golf and features three challenging holes

near Lost Coon Lake, which has a spooky look with stumps emerging from the water after an ice storm

60 years ago. The nearby Grouse Mountain Lodge built one of the 9s and then final 9 was added in

1994. The courses are operated by the city of Whitefish, offering locals a $500 annual membership.

Perhaps one of the most enjoyable rounds I had came on the Village Green Golf Course, located

very close to Buffalo Hill. It’s a fun course that seniors really like, especially since the course offers 2-

for-1 specials on Tuesdays and Thursdays. It can be challenging with water coming into play in the

Meadow Lake Golf Course, which was remodeled by Dick Phelps, offers some of the most

fairways. The undulating greens can “eat your lunch” as three putts are the norm rather than the

have been kept up as nicely as the others, but offers some fantastic views of snow-capped peaks up to

While it requires a little more drive time, the southern end of Flathead Lake, the largest

freshwater lake west of the Mississippi at 28 miles long and up to 15 miles wide, shouldn’t be

designed by John Steidel and located across the highway on the shores of the lake, offers the most bang

Mountains. If all the locals are as nice as my partner that day, Tracey Dooley, it’s no surprise why this is

the favorite of golfers in the southern end of the valley.

and has spectacular mountain views, but we didn’t have time to get down there.

Indian Springs Ranch is the newest addition to the association. It is a links style an hour north

of Whitefish on scenic Highway 93.

“member only” policy. My high school classmate Guinn Smith, who has a home in Kalispell, says he’s

heard from friends who have played it and said it may be the best in the state.

The Red Lion is the place to stay if you are playing Big Mountain, Buffalo Hill and Village

While the golfing season is short, mid-April to mid-October, golfers can enjoy extra playing