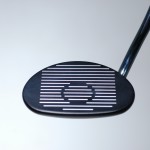 The history of advancements in golf equipment always begins with clubs that are easier to hit. Not all of them come from the major club manufacturers with their R&D departments.

This proved true at the ING Spring Conference when Herbie’s One-Putt Wedge claimed the honor as the best product. I have to admit that I had not heard about the unique club until I arrived at Innisbrook Resort, but knew that one of the best PR guys in the business, Reid Nelson, was there with the designer, Kit Mungo, and agreed to check it out during the demo day.

The first thing I noticed was that the club was definitely different from other wedges. It was more upright and seemed to put my hands in the correct position for chips that I had learned at the Dave Pelz Short Game School. It also featured a deep, wide and flat sole, a unique double bend steel shaft from True Temper, a hosel positioned behind the symmetrical black clubface, a white visual alignment aid positioned on the rear flange and weighted rods for heel and toe perimeter weighting.

“Just use a putting stroke,” Nelson said when I started chipping. “Make a pendulum swing, rotating your shoulders rather than your spine and hit down and through the ball.”  I did just that, putting my left hand low just as I do with the putter. Sure enough, the chips started rolling up close to the target hole. Nelson went on to explain how ball position in the stance could be adjusted to match the height of the chip or pitch. Then Nelson even had me make longer swings at targets out on the range. While I did feel like I got the club off the straight back, straight through line on the fuller shots, the clubface stayed square to the target through the hitting area and ended up near my targets.

Feeling like this just might be the answer to my short game woes– those wedge shots from inside 50 yards–and hearing other writers like Larry Durland and Bruce Vittner also say how easy the club was to use helped convince me to cast my ballot for this innovative product although there were some other worthy candidates like the Razor Golf “Mutation” fairway wood, the new “Polara” golf ball and even the TaylorMade R11 driver.

I did visit a little more with Mungo, who is owner of A Better Club Inc, a custom golf club and club-fitting company in California, and did a little more research to find out the rest of the story.

The unusual name came from the fact that it’s named for Herb Hyman, founder of the Coffee Bean and Tea Leaf gourmet coffee franchises, who came to Mungo seven years ago asking him to design a wedge that could be used like a putter, but could also be used from the sand and from 60 yards. “During our tests, it was always referred to as the Herbie,” Mungo said.

As a clubmaker, Mungo had made custom clubs for different golfers, including a two-sided putter so that Mel Gibson could use it right-handed for longer putts and left-handed for short putts. “That was easy to do,” Mungo said.

However, Hyman wanted it to conform to USGA regulations and could be patented and later brought to the market.

“At first, I was a little skeptical,” Mungo admitted. “I was thinking, what hasn’t been invented.”

Mungo decided to undertake the assignment in 2004 and started developing protypes, using the design of the mallet putters with all its geometric shapes as the starting place.

“There were times when I got discouraged, but I believed we could get it done,” Mungo continued. He even had a meeting with the USGA. “We went through four submissions and rejections before getting the final utility patent in 2007.”

Herbie’s One-Putt Wedge was then brought to the market in November of 2009 and started drawing more notices on the West Coast and then nationally the following year, but I had just missed out hearing about it until the ING Conference.

There seems little doubt that Herbie’s One-Putt Wedge may live up to its name of allowing more golfers to get their chips close enough to take one putt to finish the hole and I’m adding it to my golf bag, which now includes the new TaylorMade Burner 2.0 irons (3-pw).

“It’s very versatile and will allow you to eliminate extra wedges and get other hybrids in your bag,” Mungo added, referring to the players who follow the USGA’s 14-club limit.