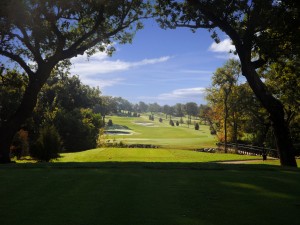 The combination of a down economy and the overbuilding of golf courses throughout the United States more than a decade ago has reduced the number of new course openings dramatically. While there were no new courses opened in 2011 here in the Dallas/Fort Worth Metroplex, golfers will get to see different looks as several underwent renovations.

Perhaps, the two most noticeable undertakings that closed courses almost a year occurred at a pair of city-owned municipal courses, Stevens Parks Golf Course in Dallas and Pecan Hollow Golf Course in Plano.

Architects John Colligan and Trey Kemp handled the dramatic changes at Stevens, resulting in golf professional Jim Henderson calling it a “reconstruction” since 12 holes were completely changed. Regulars did not recognize the course after the fifth hole when they returned. “It was sheer genius what they did, “ added Henderson.

Taking advantage of existing bluffs, creeks, trees and vistas ignored in the original routing and design by Jack Burke, Kemp took out what Henderson called “some of the quirkness” that will now put the drivers back in the hands of golfers as a 6,300-yard par 70 layout.

New turf was added–Premier Bermuda for fairways and tees, Tifton 19 Bermuda for the rough and Miniverde for the greens, which will have a variety of square, rectangular, diamond and triangular shapes likes the ones in the original design. More than 800 trees were added along with 38 sand bunkers. A new irrigation system, featuring a 400,000 water tank, will eliminate the need for a pond.

D.A. Weibring and Steve Wolfard handled the assignment at Pecan Hollow and they also made a lot of changes, creating a different routing with 11 new holes, including a beautiful par 4 10th hole that was carved out of the woods to expand the course.

Another major change was the move of a lighted driving range between Nos. 1 and 18 and the addition of a five-hole short game practice area like no other at a public facility y in the Metroplex.
New tees have pushed the tips to 7,026 yards, but four other sets ranging from 6,567 to 4.848 will allow players to play from tees that suit their playing skills.. The greens were enlarged and now feature Miniverde Bermuda. Thirty-eight new bunkers, including some that will challenge the second shots on the par 5s, were added with new white sand.

“We’ve got a lot better drainage (100s of underground drains added) now and shouldn’t have problems with flooding and having to shut down the course-as we have in the past,” said pro Steve Heidelberg.

The greens at the Traditions 9, part of the 27-hole Bridges at Firwheel Golf Park in Garland that was formerly part of the original Lakes course, were rebuilt with replanted with bentgrass. The bunkers were also renovated with new white sand added.

“We did a lot of landscaping, including tree trimming and added rock bed outcroppings that will remind some of Horseshoe Bay.” said superintendent Gary Chambers. “In addition, a babbling brook with waterfall was added left of No. 3.”

As might be expected, regulars liked the changes, but wanted to know when similar work was going to be done on the Champions and Masters 9s. “The city listened and we will re-work the bunkers and add white sand,” Chamber said, “but will not close the course.”

Castle Hills in Carrolton got a new owner Bright Realty, and new name, The Lakes at Castle Hills, featuring water on more than half of the holes. The greens were rebuilt to their original designs and back open after only 90 days. Players rave about the new sand in the bunkers. The course routing remained basically the same, but .a lot of cleaning of bushes provided a new cleaner look.

In addition, Hank Haney moved his world headquarters for the Hank Haney Golf Schools to the practice facility that features tees on both end of a 500-yard range and three practice holes.

The greens at Bridlewood Golf Club in Flower Mound were returned to their original size and shape with Tif Eagle and the bunkers were renovated after Dominion took over the management.

Up north at Lake Texoma, the private Rock Creek Resort opened the second 9 to its Jack Nicklaus design, featuring natural features as its winds through oaks and rolling hills along Rock Creek.

For 2012, the Shores Country Club is also undergoing a major renovation with a planned opening lster in the spring while Chase Oaks Golf Club in Plano, L.B. Houston Golf Course in Dallas and Hidden Creek Golf Club in Burleson will get face lifts and re-open later in the year.. The City of Fort Worth will close Z Boaz Golf Course. The Vaquero Club in Westlake plans strategic changes on several holes, complete renovations of greenside and native bunkers and the planting of hundreds of trees while new tees and renovations of the bunkers are under way at Brook Hollow Golf Club in Dallas. A group headed by Lee Trevino purchased Diamond Oaks Country Club in Fort Worth and plans a major renovation