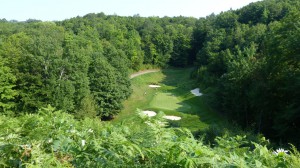 Sometimes you just have to be in the right place at the right time…..and chalk up an added bonus if it is with your fellow A Position Golf Road Warriors.

Last August when the Warriors visited my home state of Michigan, up in gorgeous Gaylord, I was invited to join them for a few holes of golf and some camaraderie.  It was a busy week and I almost didn’t go. But my mantra of ‘Accept Every Invitation’ held true and off I went.  After all, how often do I get to see these valiant men and defenders of the links?  So, 3 and 1/2 hours up I-75 I trekked, anticipating their tee time on the fabled Threetops par-3 course at Treetops.  Unfortunately for me, they had gotten an early start and I set off to find them, playing the first holes quickly.  Finally, on the 7th hole – the one Lee Trevino aced for a million dollars during the Treetops Shootout a number of years ago – I found the lads and proceeded to play in.  Almost birdieing the 9th, I was all ready to enjoy dinner, discussion, and tall tales when trip host and marketing guru Kevin Frisch approached me and simply said, “Janina, I need your help”, indicating the film crew behind him. “They are here to film the 2013 golf campaign for Pure Michigan and they’d like a woman featured.  Will you do it?”

For those who don’t know, from 2004-2008 I hosted a television golf show, ‘Michigan Golf Weekly’ on CBS-TV-Detroit where we toured many fine courses in Michigan, playing them along with invited celebrities from various sports and businesses.  We featured architectural snippets and course designer interviews, pro tips, etiquette, health and fitness, dining and drinking options, and a lot of good-natured ribbing when my co-host Jeff Lesson from CBS radio couldn’t find the green….or on some occasions, his ball.  You might think, ‘well, what about you, Janina, don’t you hit it awry too?’  Well yes, sometimes I do, but if you check with the Golf Road Warriors, I’m sure they’ll attest to the fact I tend to play on the straight and narrow.  In other words, the ball usually goes where I am aiming – though sometimes my aimer is off.  So I said ‘yes’ to Kevin and producer Heather Monaghan, for whom I’ll give kudos here for realizing that featuring women might go a long way in getting an underserved market out to play more golf.

The crew and I went out, along with Kevin and Treetops Director of Golf Kevin McKinley, to hit sweeping drives into the sunset, soft irons onto the putting surfaces, and putts that always found the bottom of the cup.  Actually, if you take a look at the video here, you’ll see the fruit of our efforts; and yes, that putt was drained on the first attempt.  No foolin’.  I’ll share the Pure Michigan Golf Blogs as they come out.  Happy Trails! Click this Pure Michigan link to begin your very pleasant golfing sojourn.