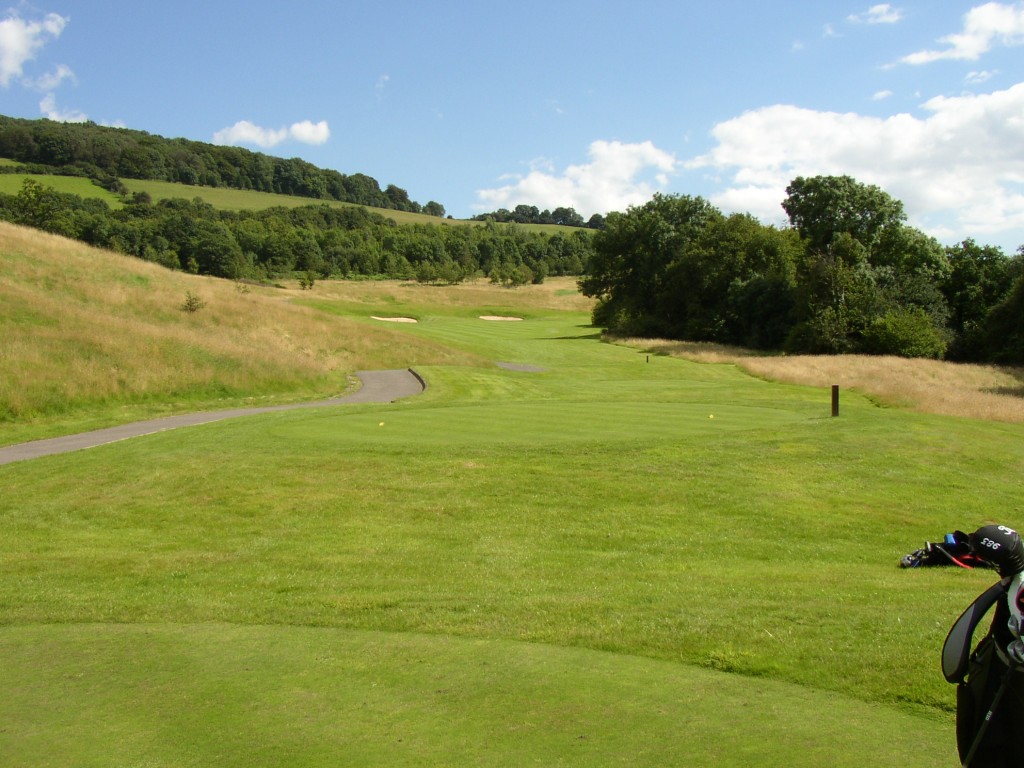 Decisions at the 15th tee.....fly the trees right and go for the green or play safe toward the bunkers?

As the sporting world turns its gaze toward Wales and the pastoral city of Cardiff to watch the 2010 Ryder Cup competition unfold, speculation buzzes as to which hole will prove pivotal in the matches.  Given the numerous risk-reward holes specifically built into the Twenty Ten layout at Celtic Manor, one can only wait and watch to see who will hit what and when.  As any veteran of match play knows, each shot is dictated conditionally, only moments before it is struck.  You can arrive at the course with a plan, but when an opponent initially deemed a lesser player in your mind is already 3-up after 3 holes, what then?  Change your plan, of course……boldly.

Much criticism has been leveled at the Twenty Ten course for what it is not:  a links course swept by sea winds and tamed by weather familiar to fans of UK golf.   Opened in 2007, it’s an infant as courses go in Europe.  Borrowing and re-fashioning nine holes from the former Wentwood Hills championship course, which had been the site of the last three Celtic Manor Wales Opens, and moving over 1 million tons of earth and rock to orchestrate the remaining nine, European Golf Design’s Head Designer Ross McMurray consulted Wentwood’s original architect, Robert Trent Jones Jr., to create this course especially for Ryder Cup match-play strategy and spectator viewing.   More suited to American tastes with water, water everywhere, on-site visitors as well as TV viewers may wonder ‘what were they thinking?’  Nary an ocean, sea, or bay in site.  Only the Usk River, beautiful as it is, and a few lakes.  But since the Ryder Cup has become more of a spectacle catering to tens of thousands, those needs have been addressed:  the course can accommodate 45,000 people at any given time.   And one can find a pretty good seat.

Attending any major match play event as a spectator is very frustrating.  With the Ryder Cup final day format featuring 12 matches on 12 holes, it is unlike stroke play tournaments where you can catch the action anywhere.  Following one match?  Count on miles of walking and posturing for the best spots to maybe, just maybe, catch a glimpse of a great shot.  Usually, it is happening where you are not…..but you do hear the roar as you search for the source on one of the flat screen televisions tournament organizers now post around the course.  During  four Four-ball and Foursomes matches in the morning and afternoon on Friday and Saturday, the playing area is compressed, translating into much more determined crowd positioning, sometimes 10-deep.   The Twenty Ten was designed to alleviate these issues, much like the TPC stadium-style courses in the U.S.  A number of ample  ‘spectator mounds’ were incorporated into the routing, allowing fans to mull about and relax, simply turning around to view play on multiple holes at once.   With water on half the holes, it is quite easy to see a splash from hundreds of yards away, even if you can’t see much else.

Normally, an architect pays considerable attention to holes 17 and 18 and how they will challenge the nerves of golfers.   Think of the island green 17th at TPC Sawgrass or everything on the 18th at Pebble Beach.   In stroke play tournaments, knowing these holes are coming up creates a gnawing dread deep within and the butterflies churn regardless of your strength of play during the preceding 16 holes.   However, in match play, many matches never make it to 18 or even 17, so really, any drama there is almost a moot point.  That’s why the 15th at Twenty Ten, the shortest par-4, should be fascinating to watch. 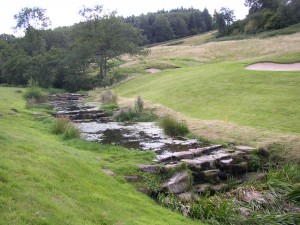 This babbling brook awaits errors both from a bold tee shot or a safer second shot from the fairway.

Now here’s a fun thing to do with this hole.  Read the rest of this article, then go to Google Earth.  Find the Fly To, then type in these coordinates just as you see them here:  51 37 10.36 N, 2 54 36.68 W, which will take you to the middle of the fairway where the ‘play safe’  landing point is.  Have some fun scoping out the possibilities and the dangers of the 15th.

The 15th, a 90-degree dogleg right playing 377 yards, doesn’t sound difficult.  However, the risk-reward options are almost completely risk.  There are two thoughts on the tee shot with near identical yardage options:  1) hit a long iron about 250-265 yards safely up the fairway where two pot bunkers await a little over-developed or off-line caution, or 2) try for the green, still 270 yards away, while also avoiding a stand of trees right, a creek which runs diagonally left of the green complex, and a large bunker wrapped around the front and right side of the green. 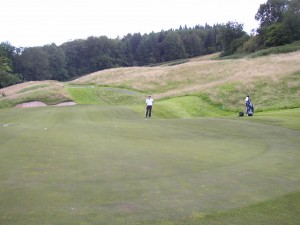 Knolls on the shallow and narrow 15th green may not gracefully yield many eagles.

Regardless of which route a player takes, the shallow, narrow multi-tiered putting surface is framed by long, thick rough and will not yield birdies nor eagles readily;  the afore-mentioned creek awaits an even slightly mis-hit shot from either the longer tee shot or the shorter fairway pitch as golf balls will easily bounce off, back up, or slide down the steeply sloped bank depending from which angle they arrive. With a natural amphitheatre enveloping this hole, cresting and continuing along 16, 17, and 18, the fans will have found a perfect place to oohhh and aahhh as these top American and European players gamble on their accuracy.