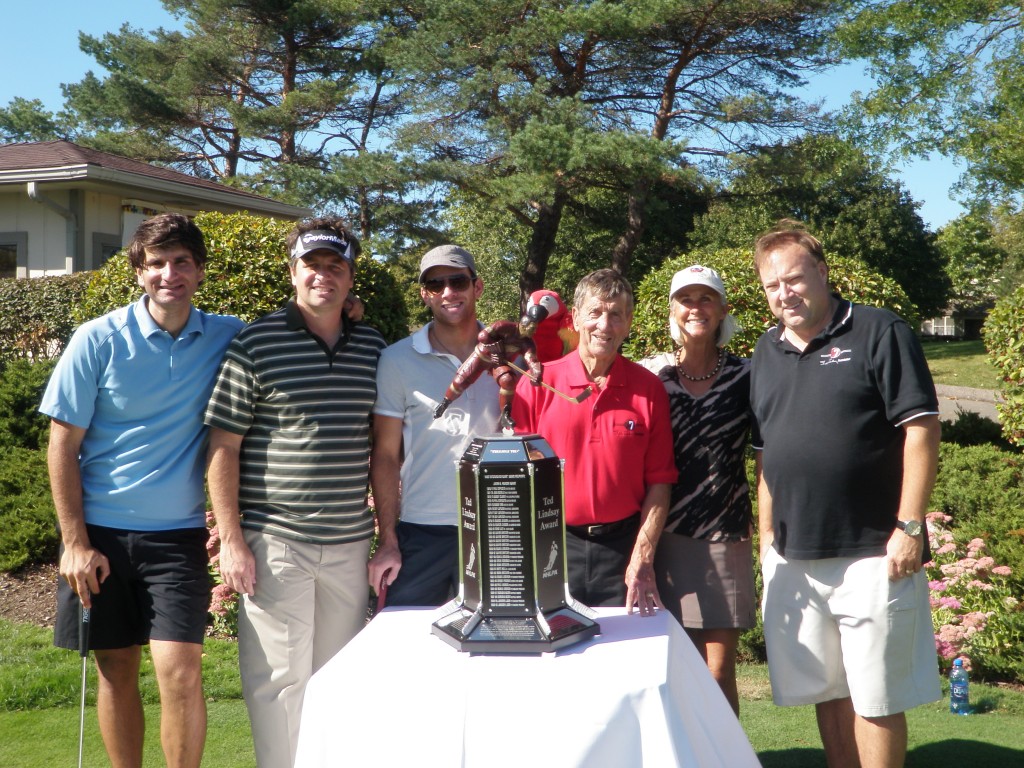 How many of these do you receive in a golf season?  And how do you decipher which ones are the best?

With cash in hand, you could play in an outing somewhere public or private every day of the week, in morning and afternoon shotguns.   It might be fun but it could also get expensive and disappointing if you don’t know what you’re about to receive.

Many of the higher end outings charge more than $1000 per foursome – try $5000 or more for chumming with the highest profile professional sports stars – but does that mean you will have a great time?   Not necessarily.  Some of those glittering stars fizzle out quickly and are not that much fun to play with – nor are most of them good players.  Check out the ‘Boys Behaving Badly’ chapter in former Charlie’s Angel and celebrity golfer Cheryl Ladd’s book, “Token Chick”.  We have all had similar nightmares.

Exactly how DO you read between the lines of a charity outing invitation so that you can make the most out of your ‘donation’?

First, check out the number of years the event has survived:  the 20th Annual anything should have all of the kinks out and will operate pretty smoothly.  Events that have been around for over 5 years are usually run by a committee infused with new blood every year and innovative ideas will abound.  But don’t shy away from ‘Golf Classics’ that are First Annuals or in their 2nd or 3rd years – the committees always try harder to make the outings memorable.  There may be some glitches but often the folks running the tournament will bend over backwards to make sure you are happy, assuring you’ll come back.   One of the better golf outings in the Detroit area centers around hockey great, ‘Terrible’ Ted Lindsay and his Foundation’s mission to find a cure for autism. 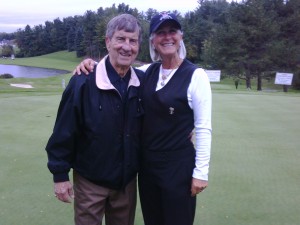 It was a cold, rainy, September day but hockey legend Ted Lindsay and Janina share a laugh at the 2009 Ted Lindsay Foundation Celebrity Golf Tournament to benefit autism research.

In its 10th year, Tee Off for Autism attracts major local businesses and sports fans who get to play with members of the Detroit Red Wings as well as some of Detroit’s other professional sports teams and media celebrities.

Second, see who the outing benefits.  Some jaded folks will wisecrack about a ‘disease of the week’ but it is no laughing matter for those who truly wish to eradicate cancer, multiple sclerosis, heart disease, cerebral palsy, autism, and arthritis or who have soft spots in their hearts for children with learning disabilities or those who are deprived in other ways.  I have served on all of these types of committees and can assure you that we who volunteer do so knowing there are no perks to speak of, and that most of the money collected does indeed go to the charity.  You can always ask for the expense reports from previous years.   And FYI, the committee members pay or donate too.

Third, look at the location.  Better outings are held at private or upscale public courses.  Perhaps there is a private club you have always wanted to play but don’t know how to get invited?  For example, in September, the Catholic Youth Organization (CYO) conducts its annual golf outing at Plum Hollow Country Club in Southfield to fund programs that will enrich the lives of over 30,000 kids in metro Detroit.   Plum Hollow has a storied past and is a legendary, well conditioned, classic club.  Pro-Ams at major tournaments in Michigan are always first class.  The Buick Open, Ford Senior Players, Futures Tour, and the Detroit Newspapers PGA events were all at quality venues – when they extisted.  Of course you’ll pay more but you may find it worth the price to experience great courses in this manner.  And, if you look at what you’ll pay anyway at a regular public course for a no frills outing, you’d be hard pressed to find an entry fee under $65 or $75, for which you receive…not very much.   But that’s OK too if camaraderie with your compadres is all you seek.

Fourth, search out the bennies.  One clue is easily seen in the invitation itself:  is it a flyer or is it printed on stationery or hard stock?  Is everything spelled correctly?  Fly by night outings or those that benefit some obscure cause (like the host’s pocketbook) will not allocate too much moolah for glitzy invitations, prizes, or awards.  When multiple sponsors are listed on the invite, you can bet their wares will be there in the form of prizes or goodie bag gifts.  If an RSVP card asks for your shirt, jacket, or shoe size, or all of the aforementioned, it is a good sign you are in for some treats.  If you see a liquor sponsor, be prepared for on course or après-round spirits, gratis……..my fave is the Margarita stand…or is it the Hummers?  These days, entry forms can be found online, thus saving the organization printing costs.

Fifth, does the invitation list the course games, prizes, and awards? If so, then you can assume the prizes will be top notch.  Do they mention separate prizes for men’s and women’s longest drive and closest to the pin?  Yes?  Well now, you have a committee that is on the ball and trying to be equitable.   Are there exciting extras like a ‘Putt for Cash’ or a ‘Million Dollar Hole in One Shootout’?  One charity event I played in had a putting contest: for every 8 foot putt holed out you received a ticket for a drawing at the awards dinner.  The prize?  A very visible and very large AFLACK Duck.   And to think he barely fit in the back seat of my car……..

Sixth, do the words ‘cash bar’ appear anywhere on the invitation?  If not, you can assume the cocktails are included with the price of admission.  However keep this in mind:  open bars demand a premium chunk of change from the Expense side of the ledger and less money will go to the charity.  Quite often you’ll be given drink tickets as a control on how much booze will be doled out.  I never use all of mine so even if you drink a lot, there are always players who have extra tickets.  Many outings are getting out of the alcohol business as local municipalities beef up on drunk driving patrols.  No one wants to be responsible should the unthinkable happen.  Please, never drive home from any outing if you have been drinking.  Get some coffee, chat with friends and rehash the round…….just do not drive.  Better yet, assign a designated driver or find someone from the committee who can get you a ride home.

Seventh, is the outing a breakfast/lunch deal or a lunch/cocktails/dinner ordeal?  Or is it something like the WJR/Arvin Meritor March of Dimes celebrity event at Indianwood Golf and Country Club in Lake Orion, Michigan that offers breakfast, grilled Angus burgers and dogs on the course (more than once), cocktails, dinner, and dessert, with great prizes, gifts, and goodie bags?  Obviously, the early day will cost less than the afternoon affair, but who really wants to get up at 4am to beat the traffic for a 7:30 shotgun start?  You do? OK, you dew sweepers…..hop to it.

Eighth, consider the purpose of your presence or participation at an outing.  Are you a sponsor, a donor, or are you hosting some business clients?  Do you hope to gain some business, new clients, or new friends from the experience?  If you are, you may want to check out an outing once before you invite folks the next time.  I once was at an event where the food ran out, the prizes had to be picked up at a later date, and expired gift certificates were given out.  This is not the kind of outing you want clients to remember you by.

Ninth, if you are invited as a guest to a golf outing, do not pay one whit of attention to numbers first through eighth.  Just go, have a good time, behave yourself, buy raffle tickets, and overtip the bag kids, bartenders and wait staff.   But don’t overimbibe lest you find yourself on the hook for that $10,000 piece of auction artwork or memorabilia you unknowingly bid on and  cannot identify…..even two weeks later.