On a foggy May morning in 1964, a group of 8 and 9 year olds trudged toward a makeshift practice area near the first tee at Palmer Park GC in Detroit.  Armed with a couple of hand-me-down clubs, the kids stood on white-limed spots and listened as golf professional Chris Williams introduced the first, yet most important, lesson of the game:  Etiquette.  Five sessions later, with rudimentary playing skills, two more months of summer, and a pink golf card allowing weekday 9-hole rounds for 25 cents, they let us loose into the world.   No one anticipated golf stardom but we did expect to meet friends and have fun playing the game. 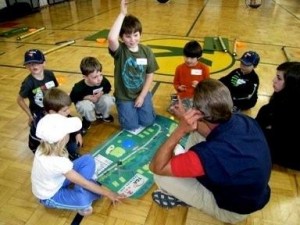 Today the focus of junior golf has evolved.  Scores of youngsters are swarming to programs that graduates of the Detroit Free Press Junior Golf Schools of the 60’s and 70’s and other junior programs around the U.S. wouldn’t recognize.  Swing gurus, psychological coaches, strength-training, fitness regimens, and high tech equipment are creating junior players capable of competing far beyond their years.

But is it better?  Prior to teeing off at a Golf Association of Michigan Women’s Championship, some college girls discussed how relieved they’d be when the event was finished so they could stash their clubs forever.  With golf participation numbers flat-lining, is it an indication that perhaps the overpowering emphasis on tournament competition is burning kids out too early?   Intensive training has revolutionized a generation of junior golf schools, but somewhere along this path, the joy disappeared.

Fortunately, it’s beginning to resurface.  Programs are sprouting up which focus on golf as a means toward absorbing life lessons and actually having fun.   One of the newest offerings is California-based Total Golf Adventures (TGA) whose mission is to provide access to golf while building life values, instilling confidence, and making the game both enjoyable and educational.

While some compare this effort to the PGA’s First Tee, TGA brings the completely portable series to schools and community centers, solving the transportation problem most kids face getting to the distant sites of other programs. 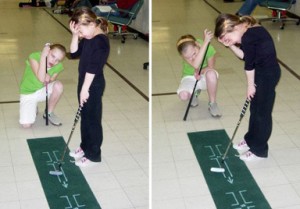 "I can't believe I missed!"

Developed by education specialists, TGA provides Pre-K – 8th graders a chance to learn golf in a safe and fun environment.  Five teaching objectives are to Engage, Educate, Enhance, Embrace, and Empower.  Each one-hour weekly session begins by ‘Engaging’ students to shake hands thus initiating the social aspect of golf, then moves on to stretching exercises illustrating the importance of physical fitness.  The other ‘E’s supply everything from learning skills to character development enabling success both on and off the course.

Former Detroit Free Press Deputy Managing Editor Dave Robinson operates TGA franchises in metropolitan Detroit.  An avid golfer with great passion for the game, Robinson always enjoyed coaching his kids’ sports teams and working with budding journalists.  “Golf is not just a sport but a valuable lifelong experience.  The TGA curriculum is perfect for exposing youngsters to a sport they can play the rest of their lives – with their children.”

Program costs are parent funded, though scholarships are available.  Costs range from $99 – 119 for 6 weeks and include all equipment, program materials and class awards of caps, T-shirts, golf balls, bag tags, USGA Rules of Golf books, etc. celebrating each of 5 color levels of achievement.  Five-day summer camps are $349 with sibling or 2nd week rates of $299.  More information is available at their website, www.golftga.com

In 2008, the Michigan Women’s Golf Association (MWGA) partnered with the USGA, LPGA, the Rhonda Walker Foundation and the U.S. Navy Regional Recruiting District Michigan/Indiana (NRD-MI) to create an inexpensive junior Girls’ Golf Program offering mentoring and nutritional information as well as golf instruction.  Over 45 girls attended this inaugural 6-week program at the Learning Center at Belle Isle, a unique island which lies in the Detroit River between Detroit and Canada just before the River empties into Lake St. Clair.  The program concluded with a picnic hosted by NRD Michigan featuring only foods that were healthy – not the usual hot dog, chips and a pop.

Under the guidance of LPGA professional Julia Baldwin and volunteers from MWGA, the girls learned etiquette, fundamentals of golf and course management.  Golf readiness requires both physical fitness and nutritional health but few programs emphasize proper eating habits.  Obesity, diabetes, and other ills are at epidemic proportions everywhere in the U.S. but especially so in urban and minority areas.  A Navy sponsored nutritional initiative added a welcome twist by including brief dietary presentations, informational handouts for parents, and specially selected snacks for energy and performance.  The girls quickly began policing themselves, chastising anyone who showed up for class munching on Doritos or soft drinks.    This summer, NRD MI supported the Girls Golf Program by once again sponsoring nutritious snacks and sending both male and female personnel to mentor the girls. 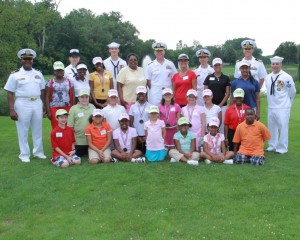 On July 20, 2010, the final outing of this year’s program was held at Dearborn Hills Golf Club in Dearborn, Michigan, home of the Ford Motor Company.  Over forty girls, their parents and MWGA mentors played in a 9-hole scramble so the girls could experience an on-course ‘official’ round in which the Rules of Golf and proper etiquette would be put into perspective.  After completion of play, the group received a special surprise:  Commanding Officer of the U.S. Navy’s Recruiting Command and Rear Admiral Craig S. Faller was in Detroit for a brief visit and stopped in to speak with the girls and to present awards for the tournament.  Admiral Faller got his own surprise when, upon his introduction, everyone in the room stood up straight and tall and shouted ‘Good afternoon, Sir!!’  The Admiral was also  impressed with questions from the girls, which ranged from ‘Why don’t you have all those medals on – like the other Navy people (the Petty Officers)?’ to ‘Can girls do anything in the Navy?’  He expressed the major role education plays in following any career path, with health and fitness vitally important as well.   Ultimately, the lesson of the day was that a segment of the population normally ignored – urban African American  pre-teen and teen underprivileged girls – learned that they mattered…….enough for the Admiral to amend his schedule to make that detour.   Plans are in the works to continue these Navy-sponsored initiatives.  Contact www.mwgolf.org for more information.

The Traverse City (Michigan) Junior Golf Association (www.tcjga.com) has a knack for getting kids interested in the game at an early age and keeping them.  Founded 27 years ago, Executive Director Bob Lober remains energized.  “Our emphasis is to introduce these kids to golf in a non-threatening way.  ‘Life Skills through Golf’ teaches honesty, integrity, respect, confidence and good sportsmanship.”  Since 1984, thousands of kids ages 5 to 21 have experienced innovative methods of being nudged into the game……gently.

“We aren’t hard and fast with the USGA Rulebook at the Beginner level.  The 7/4 Rule (pick up after 7 strokes/4 putts) helps kids save face.  Because of this and other program management techniques, 90% of our kids move on to the next phase.”  Lober’s assistants are educators, coaches and golf professionals who understand how to motivate.   Parents are encouraged to help but will be moved out if they become ‘too active’ or interfere.

Given the support of this community, Lober turns no one away.   With annual numbers topping 400, kids from everywhere are welcome.  Over 2500 have participated in the ‘In-School’ golf program.  In 2009, 14 states were represented, thanks to the area’s status as a revered summer golf destination.  Through the years, the number of girls joining the TCJGA has increased to 20%.  Added Lober, “I get as much satisfaction, if not more, coaching girls than boys.  I thoroughly enjoy watching how far they move with the game.”

Also quite familiar with the northern junior golf climate, Lois ‘The Sarge’ McManus has coached golf teams at Traverse City Central H.S. for 15 years and her teams are like family – with all the prerequisite experiences.  While traveling with her girls’ team, it is not uncommon for golf practice and competition to transition into shopping excursions, moviegoing, playing games, and teammates assisting each other with homework in math, language, and sciences.  She says, “Golf helps the girls understand that while they compete and live as individuals, they are still a team, both dependent and independent simultaneously.”

Coaching both the girls’ and boys’ teams has given McManus insight into differences between how each gender prepares for golf.  “The girls are definitely more social and are happy to end practice early so we can discuss strategy, rules, and other issues.  The boys are more physical and want to lambast drives into oblivion; they initiate competitions among themselves and will practice until dark, given the opportunity.  However, the girls multi-task better and perform finesse shots with each club. Their sessions are shorter but more complex…they’ll practice without being told.”

On the LPGA circuit, it is no secret that the professional women golfers from Asia are strengthening the Tour.  The fact is, junior golfers are trained differently in eastern cultures.  “Nearly everyone is freely given at birth a wonderful vehicle, the human body, “ says Peter Daetwiler, author of ‘The Secret of the Inner Swing’. “Once you learn the skill of spherical rotation and how to use it properly, you will have unlimited energy and you won’t get tired. The martial art of Qi-Gong teaches complex mental and motor skills required to focus your Qi, moving from your center.  In the East, people learn Qi-Gong as a basic facet of the culture……to meditate and go within from a young age.  In the West, we aren’t usually taught this so we never learn to run the body that should get better with age.  Because we never shift all our elements and forces toward proper balance and moving effortlessly, we never get the boosts of energy and learn what we are really capable of.  To know our capabilities gives us the strength to move into higher levels.”

One concept under the radar of those looking for junior golf alternatives:  caddying.  Not necessarily a bona fide junior program, it is nonetheless a vehicle for youngsters to learn about life through golf.  With the added benefits of earning money and being in business for yourself, caddying provides everything golf teaches:  character study and appreciation, fairness, discipline, hard work, reward for good performance, fresh air and exercise, networking, interaction with people of various ages and backgrounds.  And, you get to play golf on some of the finest courses for free, which doesn’t necessarily beat having a 25-cent pink golf card.

2 Responses to “Not Your 1964 Junior Golf Program Any More”