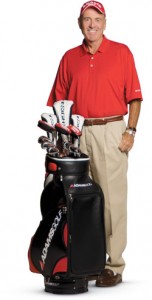 As the first year of TEE IT FORWARD continues, leaders in the industry have already pronounced it a ‘rousing success’ – sort of.  Created by Barney Adams, founder of Adams Golf, the idea is that golfers playing from the correct set of tees for their game – and not the longest ones the course provides – will enjoy the game more while also speeding up play.  The USGA and the PGA are strong supporters of this movement and recently promoted the concept during this year’s U.S. Open and U.S. Women’s Open.

Over 11,000 golf facilities were provided with information about the program, though only 1,900 were officially were registered and reported results during the promotional month of July;  about 237,000 golfers used the TEE IT FORWARD program and  70-90% of those surveyed enjoyed the faster play and better experience, also commenting they’d recommend the idea to others.

However, Barney Adams believes it will take some time before TEE IT FORWARD is embraced by all who should take note.

“It’s going to be a long haul and I never expected anything different.  You’re talking about changing human nature and the male ego.  Those are formidable obstacles.” said Adams in a recent interview with Golf World.

My question is, why would it take a huge undertaking such as this to play golf with a little bit of common sense?  If you are a decent player and can’t reach the greens, why would you pay good money to beat yourself up?  Obviously, even the best architect can never create course yardages that are all things to all players of every ability due mostly to environmental concerns, but with many facilities now boasting multiple sets of four, five, six, and even eight tees, how can anyone not take advantage of using the proper tees?

Adams sums it up best: ego.

Recently I played with a group of media lads and posed this question to one golf editor: Why do men always decide that the whole group should play from the same tee despite differing handicaps? He honestly answered ‘I don’t know’.  In my experience, the discussion to determine this usually emanates from the lowest handicap golfer of the group and goes something like this: ‘OK, why don’t we all play from the Blue Tees?  They’re about 6,700 yards.  That’s good for everyone, right?”  Well, what weenie is going to argue or say no?  The male ego usually will not allow for anything else.  And so, the others in the group suffer through for 18 unhappy holes of hitting few greens, not reaching proper landing areas, and pumping balls into the junk.  The ringleader can also suffer the same fate because he is playing from a set of tees that is probably too long for him as well.  At the end of the round, the comments range from ‘I had a bad day’ to ‘wow, this is really a tough track – I need to play it again so I’ll know where the trouble is next time!’   Actually they do need to play it again, but from the next tee box….or two…up.

I have no issue playing on comparable tees with men – having done so during my four years on the men’s golf team in college.   Distance was certainly a factor I dealt with then by playing courses that were up to 7,000 yards, but that was the price I paid to play on the men’s collegiate circuit.  No complaints;  I simply made up for it with a stellar short game and putting skills…..and nothing annoyed the chaps more than losing a 430-yard par-4 to my drive, three wood, sand wedge and one-putt when they boomed it 280 (that was long then….), missed the green with a 7-iron, and didn’t get up and down.  But now, if I step up to the yardage which suits my game, which can be anywhere from 5600-6200 yards depending upon topography, I’ll sometimes get remarks about playing the ‘girly’ tees.   Many seem to think that because I carry a 4-handicap, I should play 6,700 yards with them.  What they don’t understand is that my handicap is computed from Ladies Forward Tees or from ‘White’ tees that are computed and adjusted for course rating and slope (which can sometimes climb as high as 76/140).  If I play from tees that are 6500 yards or longer, guess what?  My handicap just shot up a few digits.  Try getting those strokes from the boys without a fight.

Of course, in a scramble, the guys are ecstatic to have me play from the Forward Tees.  Sometimes others will complain that I should play back further because I hit it stronger than most women.  My question is this:  If Dustin Johnson, Bubba Watson, or Michelle Wie was your scramble partner, would you insist they move back a tee from where they’re told to play to make it more fair?  Be honest, now.  I play from wherever the Tournament Director tells me to play.  End of story.

If TEE IT FORWARD wants to prove a point, here’s an idea I’ve thrown out to naysayers before:  $100 is on the table.  Play with me from the Forward Tees, according to USGA rules – counting every stroke and penalties too.  If you can break 80, the money is yours.  Would you take the bet?

To date, no one has.