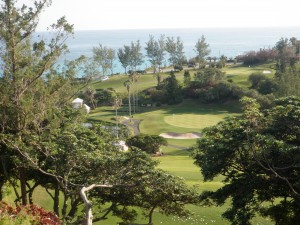 An invitation last February to play in the 2011 Bacardi National Par-3 Championship at the Fairmont Southampton found me jetting to that sapphire and turquoise enveloped gemstone of British holdings, otherwise known as Bermuda.  As a media guest, I was entered in this fairly new event which was designed to introduce more people to the superb golf experiences on the island.  The Bacardi Championship is a two-day 36-hole tournament that is open to professionals and amateurs, men and women alike and will take place March 23 – 25, 2012.  This year, an open senior division for gentlemen and ladies has been added.  Even if you’re afraid of the word ‘tournament’ and are tensing up already, don’t give it another thought.  It is great fun.

As part of an ongoing effort by the Bermuda Golf Association and the Fairmont Southampton to energize both the local and international golfing communities about all good things happening in Bermuda golf,  Anthony Mocklow, Tournament Director and Director of Golf at the Fairmont Southampton, points out that “the Par-3 competition tests short-game quality and skill rather than strength and distance, leveling the playing field between old and young, men and women. It means that any golfer with a bona fide handicap can play.”  Cleveland Golf has also signed on as a sponsor this year, evidence that the event is beginning to garner a lot of attention.  Last year there was excitement galore when an ace was carded during the tournament……..and by a woman, no less!

If you have never been to Bermuda, the Bacardi National Par-3 is a perfect reason to consider going.  It’s a fabulous trip, even when you are still in the air.  When flying into Bermuda, the most amazing transformation takes place a few miles before you see the island.  After traversing hundreds of miles of dull, dark Atlantic water, Bermuda’s unique location atop an ancient ocean shelf that rises from the deep provides an immediate color shift to some of the most unbelievable hues of blues and greens courtesy of the sun’s reflection from the underlying and surrounding trademark pink sands.  Sometimes you’re lucky enough to see the outline of a few of the island’s golf courses.  For a spurt of land only 22 miles long and 2 miles wide at its widest point, 9 courses likely 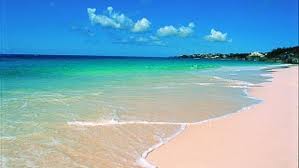 represent the highest course to land ratio in any country.

If your itinerary only allows play at two other courses in addition to your fun at the Bacardi Par-3, those choices should be the government owned Port Royal Golf Club and Mid-Ocean Club, a private club.  Both have hosted the PGA’s Grand Slam of Golf.  Port Royal is available for public play.  Recently renovated in 2008/2009, this Robert Trent Jones Sr. course on the west end of Bermuda should be on your bucket list. The renovation of Port Royal was both revealing and long overdue.  This championship caliber club was marred not by original design flaws, but by spotty course conditions where sparse fairways and inconsistent speeds on the formerly Bermuda grass greens wreaked havoc with putting performances.  Those have been fixed with new tifEagle grasses on the putting surfaces.  Relying on rainfall is wonderful for course maintenance budgets but does not provide optimal lies; a new irrigation system now assists Mother Nature and the fairways are faster and more consistent.  Groves of scrub, bay grape trees, wild bougainvillea, and other native trees and bushes blocked views of what golfers truly came to see:  the unobstructed bliss of crystal clear Atlantic Ocean waters…..not the muddy brownish versions near the eastern U.S. coasts but instead the colors of wish-you-were-here postcards one would think had to have been retouched or Photo-shopped.  If you can’t play, amend your list a wee bit and buy a bucket of range balls to enjoy the best downhill driving range ocean view sunset anywhere. 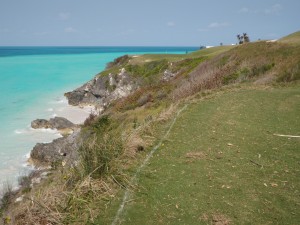 Traveling toward the east end in Tuckers Town, Mid-Ocean is a bit tough, though not impossible, to gain entry.  The Charles Blair MacDonald design will mesmerize you almost as much as coastal views from the opening 4 holes and finishing holes 16 through 18.  An interesting note is that the par-3’s at Mid Ocean represent the four classic styles of ‘short’ holes: Redan, Biarritz, Long and Short.  Bone up on Golf Course Architecture 101 to determine which is which.  For even more fun, leave the cart in the barn and hire one of the caddies who will provide you with local flair, stories, entertainment, and ample course knowledge.  Years ago I played in the finals of the Bermuda Ladies Amateur, a match play format.  Though I was Runner-Up, the positive aspect was that I got to play this masterpiece many times as I won my way through the brackets.  I’ll never forget my towering drive on the famous 4th ‘Cape’ hole.  In the final, I chose to bite off almost all of the massive lake….and was successful, leaving only a 9-iron into the green.  And that, my friends, was with a custom Joe Powell Persimmon 7-degree driver…..back in the days when it didn’t cost a fortune to actually take your own clubs.  Also interesting to note about Mid-Ocean, there is no out-of-bounds on the course.  There are other pressing problems with thick vegetation, massive drop-offs, lakes, roads cutting through the course, elevation changes, and oh yes, the Atlantic Ocean, but that is all minor compared to the thrill you will experience playing this marvelous layout.  After the 18th, don’t forget to order the rum punch at the 19th Hole bar inside.  In fact, order a rum punch anywhere you go.  The ones (note the use of plural) at Port Royal are surpassed only by the stellar view of the finishing holes backed by the endless cerulean waters.  Bermuda Rum Punches are all different but even the worst one is magnificent.

Almost mid-point between the two courses, the Fairmont Southampton Hotel’s marvelous 18-hole Par-3 course beckons.  Don’t let the Par-3 designation fool you into thinking ‘cake-walk’.  Breathtaking scenery, remarkable conditions, and an enjoyable but tough layout are yours; it takes less than 2 hours to play but you may wish to dawdle a bit, admiring the views.

Prior to last year’s tournament, while headed toward my first look-see at Port Royal since I’d last played it in 1998, Southampton Player Assistant William Tucker outfitted me with TaylorMade rental clubs – but then 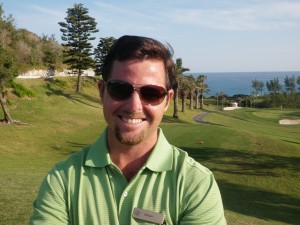 William Tucker, Player Assistant at the Fairmont Southampton and loaner of clubs

“Why not experiment with both sets? You’ll want to try them out before you play the competition tomorrow.” he suggested.  So I did.  Normally I’d walk the hilly course, a locale that was the scene of my first ever tournament here, the Bermuda Stroke Play Championship conducted by the Bermuda Golf Association; but since I had both sets, was playing alone, hitting a few extra shots along the way, and trying to take both notes and pictures, I reluctantly kept the cart.  I played well with both the DCI’s and the TaylorMade set.  I wanted to be diplomatic and honor William’s kind offer of club usage, so decided upon a compromise.  Combining his irons and the TaylorMade woods, I thought it was the perfect match:  William’s clubs were comfortably broken in, and I happen to like TaylorMade woods.

Remember that hole-on-one I mentioned earlier?  On the second hole, my tee shot was crisply played, though I didn’t see it land due to hazy and blinding morning sun in my eyes.  Media playing partners Diana Rowe and Donna Carter didn’t either as we searched for their balls along the way to the green.  As they continued playing, there was no sign of my Titleist anywhere on the green.

“I thought you said your ball was on the green?” one of the gals asked.  Hmmm, I thought so too….and I knew it had been hit well enough not to be short and not so strong as to be in the gnarly rough beyond the putting surface.  “Maybe it’s in the hole….” I suggested.  They laughed as I went to check.  I looked into the cup and there it was.  They yelled in triumph and we attracted the attention of the pro shop, which was only about 150 yards from the green.  Both William and Anthony were there, raising their hands in triumph.  Anthony hopped in a golf cart and raced over. 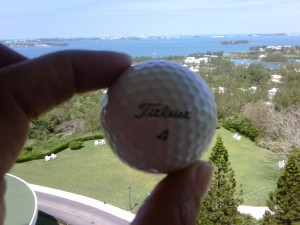 THE hole-in-one ball, as Ms. Titleist views Hamilton Harbor from the balcony of the Fairmont Southampton Hotel

Now, there is one thing you should know:  I had called the ace.  The day before the event I enjoyed breakfast in the Southampton Hotel Concierge Lounge with Anthony, discussing the fine points of positive motivation in golf.  I told him why I intended to get a hole in one.  He seemed astonished that I was adamant about getting one that week.  Other professional golfers were nearby and had overheard our discussion.  I could detect some scoffs and smirks as they quickly got back to their own conversations.  But I had my reasons.  If you haven’t yet read my article, ‘Madeline Joell: Bermuda’s Golden Girl’ you’ll need to check it out to understand my motivation in getting an ace during the tournament.  The short version is that my longtime friend and golf partner, the noted Bermudian female dynamo, passed away at age 39 of a brain aneurysm back on Valentine’s Day 1999.  This was my first trip back to Bermuda after making many there to partner in golf events during the years Madeline was alive.  When I found out that a car had been donated for a hole-in-one, I knew I had to get one so that I could donate the car – or the money equivalent – to Madeline’s cherished cause of public education in Bermuda….in her honor.  So, it was no surprise to me that I had achieved that feat.  But it was to Anthony.

I had heard from William that originally, my hole-in-one hole had been earmarked as a car hole but that last minute insurance needs had changed it only the day before.  My guess is that the news didn’t travel to the Spirit World quickly enough.  But oh well, there’s always another year.

To enter the Bacardi National Par-3 Championship, go to www.Fairmontgolf.com/southampton and download an entry form.  The entry fees are $250 for professionals and $175 for amateurs and include a Friday practice round of golf, tournament fees, continental breakfast on Tournament days, cocktail receptions and prizes.   Plan to stay at the Fairmont Southampton and do ask for the Concierge Level which nets some very special amenities like almost non-stop food service in the lounge, computer access, complimentary work-out clothing, and superb service.  Package information is available at Fairmont.com/Southampton/hotelpackages.

If you do get that hole in one, please consider donating the car or the proceeds to the tournament’s charity beneficiary, the Bermuda Red Cross, to New beginnings Education Trust, or to the scholarship foundation established in Madeline Joell’s memory.

And one last note about William: he had said ‘his’ clubs had never experienced an ace and was delighted to finally chalk one up.  I suggested he read my website article, ‘How To Get A Hole-In-One’ so that he, too, could join the ranks.  He did, and a couple weeks later got his first hole-in-one.  A few weeks after that, it was number 2.  That’s OK William, but don’t think you need to bypass my four, OK?  Just kidding……