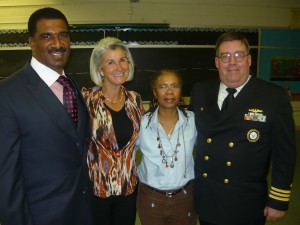 Startling statistics have surfaced about the state of the nation’s young people.  Children born after the year 2000 are not expected to enjoy the lifespan of previous generations due to major increases in obesity, diabetes, coronary and kidney disease, and other older adult health ailments.  This is reflected in Navy Recruiting efforts with major consequences: approximately 80% of 17 – 19 year-old enlistee hopefuls are rejected, mainly because they cannot pass a basic fitness test.

“In the recruiting field, the numbers of applicants are undoubtedly crucial in helping meet our mission,” said Navy Recruiting District Michigan/Indiana (NRD MI) Commanding Officer, Cmdr. Leonard Borgdorff.  “But more importantly, it is the quality of the recruits that becomes more difficult to attain each month.”   Borgdorff attests that due to smoking, illegal drugs, numerous tattoos and poor grades, qualified applicants for military service are becoming increasingly scarce as entrance standards rise.

However, NRD Michigan is not standing idly by, lamenting that nothing can be done.

To combat these issues, NRD Michigan and the Horatio Williams Foundation (HWF) initiated plans to educate and inspire students through the Great Improvement Academic and Sports Enrichment Program.  To further accomplish these objectives, a Public School Partnership team was created and the ‘Two Schools Wellness Challenge’ was born via two motivational rallies in December, 2008.

Going to an area where there was the greatest need, two inner-city Detroit Public Schools 5th through 8th grades were chosen for this pilot project.  Butzel Middle School, which was HWF Founder Horatio Williams’ elementary school and Malcolm X Academy are engaged in a friendly competition to see which school can become healthier when the school year ends in June, 2009.   The tracking method?  Not by weight loss alone.  Monthly, the students will be measured individually by height and weight but a collective Body Mass Index (BMI) number will be determined by school so that no child is singled out for teasing or hazing.   Studies have shown that BMI is a better indicator of general fitness and more accurately reflects body ‘fatness’ and potential weight problems based on weight in proportion to height.

It is not solely the students who will be participating;   the Partnership met with teachers, other staff, and parents to encourage leadership by example so that they can assist the kids with total support of the program.  At one challenge, two teachers dropped to the mats for a push-up contest.  The second place finisher – who will remain anonymous – vowed he would not be defeated a second time.  This little ‘challenge’ was not lost on the kids.  The ‘Two-Schools’ Principals, ‘Mama’ Freda Dawson from Malcolm X Academy, and Ms. Margaret Wilson from Butzel Middle School have embraced the challenge and given the Navy and the Partnership’s team members a wide berth in which to operate.

According to HWF Program Manager Joe Hudson, “We met with a diversified talent of athletic directors from the Detroit Public School League and members of the Recruiting District Assistance Council (RDAC).  We’ve addressed specific issues faced by today’s youths that are damaging to their health and well being and could have a detrimental effect on their future.”

Word on the Two-Schools program has spread rapidly through the grapevine and now, inquiries from all over the Detroit metropolitan area are coming in by the dozens from other public, private, and charter schools to query PSP members and the Navy about joining the effort.  Corporate partners and sponsors are being courted and further funding from Navy sources is being sought to expand the program.  Additionally, requests have come in to add 1st through 4th graders to the Challenge, thus preparing the kids early for a lifetime of proper nutrition and fitness.

Commander Borgdorff noted that his approach for ‘Building a Decade of Excellence’ begins at home, transfers into the schools, and continues with young adults and mentors.    NRD Naval Special Warfare Coordinator and 41-year-old Detroit native Chief Alan Hardrick, who was instrumental in creating the link between the Navy and HWF, added, “Our involvement with today’s youth has a direct impact on communities, which in turn, builds a secure future for all of us.  There’s truth in the belief that it takes a village to raise a child.”

Hudson points out that “if a person wants success in his or her life, either in the military or a civilian career, then total fitness is essential.  The Navy is helping public school kids – and their teachers and parents – learn the importance of health and nutrition.”

One might think that Information is everywhere about health and nutrition, so why expend all of this extra effort toward the schools?  And aren’t many children given healthy breakfasts and nutritious lunches through federally mandated school lunch programs?   Consider the following samples taken from a DPS December menu:

On the surface, these menu items might seem harmless, but under the nutritional microscope this food is a recipe for disaster for our schoolchildren.  Of the 11 items listed, EVERY SINGLE ONE contains one or more forms of sugar, either natural or added.  Five have white flour, which is devoid of any nutritional value, and seven items have sodium and other additives and preservatives that reside in all processed food.  Eight items have some form of fat or trans-fat.  EVERY ITEM also contains carbohydrates – some good, many not so good.  When a child eats high amounts of sugar and carbohydrates, he or she will first experience a blood sugar rush or ‘sugar high’ and become very active and almost uncontrollable; afterwards, as the body metabolizes the carbohydrates, the blood sugar drops, the ‘crash’ begins, and the kids fall asleep or cannot focus on their work.  As any teacher will testify, it is almost impossible to teach their classes under these conditions.

What Americans perceive as a proper diet is inaccurate at best and deceptive at worst.  Families get their information from television, radio, magazines, and other advertising and marketing sources that have a vested interest in selling products with little concern for how healthy those products truly are.  Ease of preparation and the convenience of packaged and processed foods and fast-foods have trumped ‘real’ food and there is a price to pay for such expedience:  tragically escalating health problems, including obesity and diabetes with earlier-age onset.  As children grow into young adults, the problems worsen and it is much more difficult to reverse the trend.

“Traditionally the Navy concentrates its efforts toward older teenagers, not middle-school age kids; however, because we are seeing such high rejection rates due to fitness issues, we knew we needed to do something to help the younger kids grow up to be more fit and healthy.  Perhaps that age-group has not traditionally been a Navy objective but now, it is simply the right thing to do,” said media and nutrition advisor Janina Jacobs.

“The Navy has always led private industry in initiatives that create better citizens and human beings,” said Clay, and added “To that effect, it is extremely important to partner with community organizations that espouse a healthy and active lifestyle.  The United States Navy is an all-volunteer force.  We serve the American people.  Essentially, we are giving back to society the very folks that receive one of our products:  Service, Diplomacy, and Goodwill.”

“Although yet in its infant stages, the Public School Partnership Team will put our young Americans on the right track,” said Hudson.  “With NRD Michigan’s help, friends of the Navy, RDAC, athletic directors and other school and community volunteers, we are determined to teach our youth proper health habits and guide them to a lifelong commitment of learning.”

“Dr. Keith stretches his motivational wings with mantras and repetitive sayings that the kids absolutely eat up,” laughed Jacobs.  “He has two catch phrases:  ‘Eat Right, Be Fit, and Think Well!!  The other, Dr. Keith describes as the ten most important two-letter words in the English language:  ‘if it is to be…..it is up to me’.   Watching him perform is like Dick Vitale meets Terry Bradshaw……..always entertaining, always spot-on, especially when he does something like adopting the persona of the Butzel Bulldogs mascot, barking and scampering all over the gym during our initial rally.  I don’t think those kids have gotten over it yet!”

The point is, ask any kid from Malcolm X Academy or Butzel Middle School what the ten most important two-letter words in the English language are and they will be able to tell you – while believing it.

What NRD Michigan and the Horatio Williams Foundation began in 2008/2009 is continuing through 2010/2011 as new health and wellness initiatives are being set up via the Clear Purpose Foundation, a brand new non-profit organization based in Detroit.   Watch for more information about upcoming projects as local and national grants continue coming in.