The San Juan Mountains of southwestern Colorado are simultaneously rugged and welcoming; made up of rough, unpopulated backcountry peaks that both intimidate and attract would-be visitors from around the world. 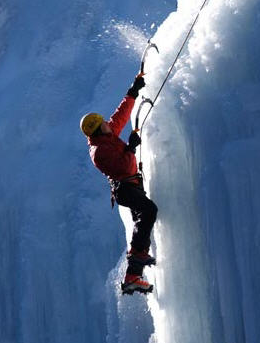 Welcome to the Ouray Ice Park

It’s fitting then, that for at least the past 15 years the capital of what may be the most alluring yet daunting of winter sports, ice climbing, is located at the heart of those same peaks in the mountain town of Ouray.

Ouray is located on the east side of Mount Emma (which separates it from the resort town of Telluride) and is home to less than 1,000 fulltime residents. It’s most famous inhabitant is its man-made ice park, located inside the Uncompahgre Gorge. Before 1994, when Bill Whitt and Gary Wild laid out a series of PVC pipes and garden hoses on the top of the town’s gorge and created the Ouray Ice Park, Ice climbers had already been setting out into the frozen wilderness of the San Juans for decades for decades.

Today, the park is considered the best ice climbing facility in the world. The original pipes and hoses have all been replaced with an entirely new plumbing system increasing the number and scope of climbing opportunities available. More than 200 routes up the icy shoots and crags inside the gorge are now climbable depending on conditions.

However, if you haven’t scaled a wall of ice before, it doesn’t really matter how many routes there are; this is not the sort of sport you want to learn through trial and error. Even as a spectator sport, it’s not for the faint of heart. Just watching a climber scale what looks like a giant icicle while holding an ice axe in each hand and kicking out footholds with the crampons strapped to his or her feet is as close as many people think they want to get in their lifetimes. Unfortunately for them, the satisfaction that comes with pulling over the top of a climb may never be realized. Call it the black diamond effect; would-be beginners to the sport envision only the sheerest of ice formations much like a neophyte skier only sees the steepest of runs when they clip into their first set of skis.

That is what makes the Ouray Ice Park so pivotal to the sport of ice climbing. It not only is home to climbs that will challenge the world’s best, but it also has the climbing equivalent of the bunny slope for beginners—and it doesn’t charge for access to the ice. So, when the non-profit Ouray Ice Park also opened its Kids Wall, the sport took a big step forward in terms of recruiting future ice climbers.

However, even on the Kids Wall, ice climbing should first be experienced behind the lead of a knowledgeable instructor and with all the necessary gear. One benefit of learning to climb ice at the sport’s hub is the multiple guide/instructor operators located in Ouray—Skyward Mountaineering and San Juan Mountain Guides are two of the best for those looking for one-on-one or small group instruction, and personal gear can be rented at Ouray Mountain Sports on Main Street.

Newcomers can also learn the ropes on the Ice Park’s own ropes during the multiple clinics that are held throughout the season.  “We started last winter with a program for kids in the evenings,” says Ice Park executive director Erin Eddy. “The clinics were popular with kids, but they also attracted interest from a lot of adults, so we’re looking at expanding them with more walk-up clinics as well as more programs in general.”

The majority of Ice Park clinics are held over the three-day Ouray Ice Festival. Started just two years after the Ice Park’s creation, this annual celebration and fundraiser provides most of the operating money the park relies on for the rest of its season. Over the long weekend, gear manufacturers, climbers of all levels and spectators come together for competitions, movies and clinics. In all, the Ice Park estimates that more than 3,000 people attend the festival each year, and Eddy and the other park volunteers are always working to increase attendance. “We are working with the Resort Sports Network to buy some TV time at different resorts in Colorado so more people can learn about all we have to offer here,” he says.

But, you don’t have to wait until the next festival to get started. March can be one of the best months of the season for ice climbing. For starters, the weather is consistently warmer as winter comes to an end. That can mean a lot when you’re hugging icicles all day. And as the ice begins to warm, the climbing conditions can actually improve. “March is still cold inside the gorge,” Eddy says, “but as it gets a little warmer the ice begins to change consistency. It’s not as brittle as the hard ice is when it’s really cold. Instead, it’s more like a soft plastic.” Soft and plastic-like; sounds a lot more alluring than freezing cold and wet, doesn’t it?

One Response to “Cold Rush”