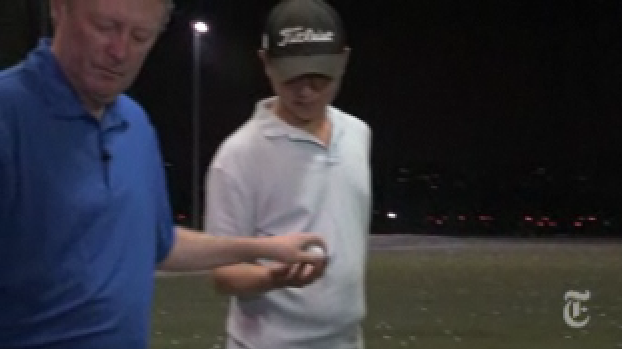 Yeah it's Cheating, but Give Me a Dozen Anyway...They're for My Dad

There’s a great video on the New York Times website by Bill Pennington for his On Par series about the Polara Golf company and their anti-slice ball, which this screen shot was pulled from. Basically, Polara has created a golf ball with shallower dimples around the seam, or vertical center line, and deeper dimples on each of the vertical hemispheres. The result, when hit, is that the ball resists the urge to travel left or right…of course, calling it the anti-hooker ball would put Polara in a completely different market, thus anti-slice it is.

The physics behind the ball’s design first showed up on golf courses in the 1970s when a couple of scientists named Daniel Nepela and Fred Holmstrom decided they wanted to actually enjoy the game of golf without having to quit their day jobs in order to spend more time on the practice range. The fact that Nepela and Holmstrom would rather design a prototype golf ball and develop the manufacturing process needed to create it, is evidence to the difficulty and unpleasantness of getting better at golf. Fortunately for them, they were also aware enough of their shared plight with the majority of all other golfers and decided to patent their design.

Perhaps sensing that the game of golf could thus get too enjoyable for the average golfer, the USGA refused to approve the ball, in essence killing it’s prospects in the marketplace. According to the Polara website, the USGA concluded that the ball did work and that in the end they were willing to pay a $1.4 million court settlement to keep such scourge out of member/guests tournaments throughout the country.

Nearly forty some years later, it’s not that the USGA has suddenly reversed it’s decision, but rather that a new ownership group has taken over the Polara patent and is hoping that the average golfer of the new millennia will choose to enjoy their rounds more rather than conform to USGA standards. In watching the video, it’s clear that most of the golfers Pennington spoke with in New Jersey weren’t immediately open to the idea of playing a non-conforming ball. But then again, these guys were all at a driving range…practicing.