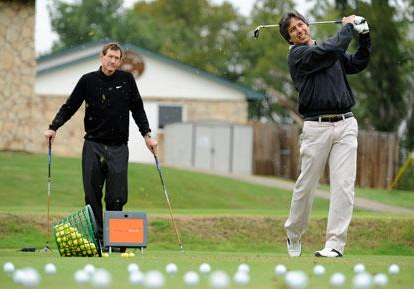 Hank Haney has a new project. This time it’s funnyman Ray Romano. The former star of the sitcom, Everybody Loves Raymond has been helping the swing coach fill some downtime during Haney’s most-famous pupil’s self-imposed exile.

Regardless of how many people are watching though, perhaps nobody knows what it’s like to have your swing deconstructed on cable TV better than the subject of Season One on The Haney Project: Charles Barkley. And while no golfer is as bad as his worst swings, nobody swings quite like Barkley.

When Haney and the Golf Channel set out to fix what has become the most notorious swing in the world, those who said it was mission impossible now look more right than wrong. But for every golfer who’s ever shanked a tee shot into a cart barn, here’s hoping Barkley will one day turn it around.

Fortunately for Romano, a 13-handicap, his swing doesn’t need as much work as Barkley’s. Chuck’s swing hurts to watch. The pain—you feel it in your shoulders first—is so acute, you could swear that what you’re feeling is the same excruciating tension he’s experiencing. Then, after the hesitations, he makes contact and the ache moves to your gut. Doubts enter your mind as if this might be a joke, but you’ve seen it too many times before, and you know there is nothing comedic about Charles Barkley’s golf swing. Before long, like an onlooker to the proverbial train wreck, you watch it again on YouTube, or during one of the few televised celebrity tournaments Barkley gets talked into playing each year, and you commiserate with him all over again.

In 2008, Barkley was down to three rounds of golf. That’s it. For the entire year—despite being a retired NBA Hall-of-Famer with a Scottsdale home across from a golf course and plenty of five-hour blocks of time on his hands. And all three rounds were for charity golf tournaments in which he didn’t really want to play to begin with. But he showed up each time because friends like Michael Jordan and Wayne Gretzky asked him to help them raise money for a good cause.

That’s what his swing does; it raises money. Seeing Barkley’s infamous swing has become as big—or bigger—of a draw as getting a picture with some of the other players at the charity tournaments, so it’s no wonder that they want Barkley to show up. But, what’s been in it for him? 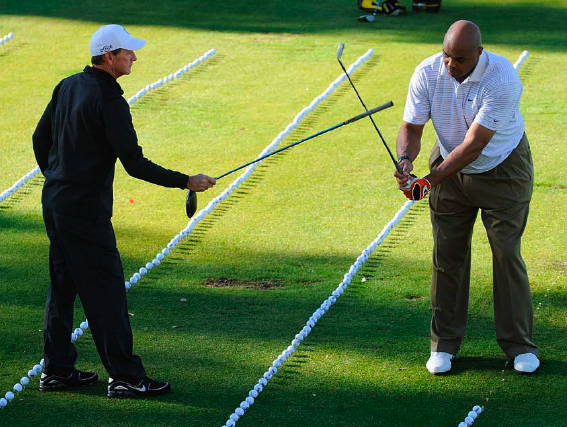 Since it’s not the satisfaction of hitting good shots in front of admiring crowds that got him to the first tee each time, it must just be that Barkley is one hell of a good friend. Why else would he put himself through the paces of a game he no longer can stand playing? Why else would he choose to approach any golf ball sitting on a tee, when he knows full well that he subsequently becomes terrified to the point that his movements look more like those of rusted-out machinery? And why does he play golf in front of hundreds of people live, and hundreds of thousands more watching on TV, when he no longer even plays just for fun? As Barkley himself says, “Playing golf on TV doesn’t make it any easier to suck.”

Going into his first project with the Golf Channel, Haney said of Barkley’s swing, “It could only get better.” So, the duo met for two- and three-day sessions every few weeks and attempted to remake what Haney described as ‘the most notorious swing in the world.’

“When we started,” Haney says, preparing to do his best Barkley imitation, “Charles told me that he had heard people say he has the worst swing in the world, but that, ‘they couldn’t have seen everyone in the world…there’s got to be someone worse than me,’ so now I just say it’s the most notable swing.”

Whatever they want to call it, a swing like that doesn’t get fixed easily. Haney knew that much going in. Still, the duo persevered. Some days Barkley would hit 1,200 balls on the range while Haney watched. In less than two months, Barkley had even lost 40 pounds as he also worked on improving his fitness, flexibility and conditioning. And it didn’t take long for Haney to admit, “I’ve never had a student work as hard as Charles does.”

It also helped that they didn’t have to worry about his entire game. In fact, Haney proclaims that Barkley has a low-handicap short game and that he putts as if he’s a scratch golfer. But even with his focus set on just one component, Barkley’s full swing off the tee, Haney can’t say there was an easy fix.

“He’s a project,” the coach says before pausing. “That’s for sure.” Plus, and this is the scary part Romano is in the midst of learning, trying to get a better tee shot is a tough enough task at the anonymous ends of driving ranges, much less in front of television cameras. The scary part for the rest of us is that Haney doesn’t see much different between Barkley’s notorious swing and that of most amateurs. “The most common mistake people make is they take it back low and inside, and then they are steep as they come down.”

That is exactly what Barkley does to the extreme. He brings the club so far inside and lowers his head so drastically that Haney’s first thought upon seeing it was that if Barkley didn’t hesitate, there would be no way he could even make contact with the ball. But whereas most viewers see the hesitation and the jerking stop and go to Barkley’s swing, Haney watched the shape of the swing and set about fixing that. “It was my hope,” Haney says, “that if we worked on the swing plane, the hesitation would go away on its own.”

So it was that on December 15, 2008, in front of TNT’s Inside the NBA cameras, with Hank Haney once again behind him and The Haney Project yet to debut, that Barkley gave us our first chance to see if Haney’s work was paying off.

As Barkley brought back the club head that night, his torso uncharacteristically loose, it’s very possible that Haney doubted whether taking this client was a good idea. Maybe he even thought for a moment of Woods, who joked to him early on that he was putting his entire reputation as a swing coach on the line when he set out to fix Barkley.

When Barkley reached the apex of his surprisingly smooth backswing, he too might have felt a small sense of terror, knowing the cameras were on him and what was about to take place would either be the reintroduction of his sideshow swing or the introduction of a new golfer altogether.

“Realistically, I’m the only person who has anything to lose with this,” Barkley said at the time. But that was only partially true. Today, no one doubts Haney’s ability after he couldn’t fix what looked to be a hopeless cause over the course of seven episodes. Undoubtedly, the Golf Channel didn’t have anything to lose; The Haney Project‘s first season was the highest-rated debut for any show in the network’s history and it’s become the first show on the 15-year-old network to attract a wide audience of sports fans, as opposed to just golf fans. 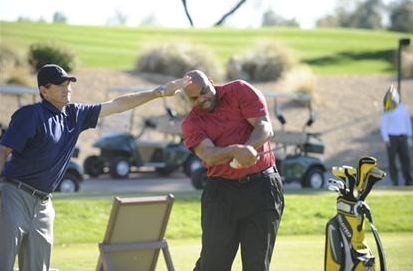 But Barkley was wrong when he said he was the only one with anything to lose because he forgot about us, the hackers. We continue to see our swing flaws in his, knowing Haney is right when he said there isn’t a big difference between Barkley’s swing and most of ours. And since Haney’s first mission proved impossible, we are the ones left who continue to feel Chuck’s pain.

For a moment, as we watched Barkley at the end of 2008, his improving downswing moving forward as smoothly as his new backswing had promised, we exhaled. Sure, it wasn’t a swing Haney would use as a model for Romano. But, it offered the whisper of a golfing promise, that small improvements are possible, something we can all take some comfort in knowing.

In the end, Barkley’s swing is just a little less painful to watch. But at least we all know there’s now a chance that on national TV, no matter how bad our last swing was, we could still get up there, square to the ball, take it back low and slow and follow through from outside in at least once, because that’s what Chuck did. Now, if only Ray Romano can give us some more of the same kind of hope, we’ll continue to watch Haney’s second season as well.

Portions of this article originally appeared in Tee It Up magazine.