The Countryside, Tradition, History and Scotch are all Famous...But it's the Food that Surprises

The haggis was brought into the room, lifted above the head of its carrier and preceded by its chef, a bagpiper, and a barman. It was the barman who gripped the bottle of Glenfiddich single-malt Scotch and lifted it into the air as if to purify the atmosphere in advance of the haggis’s arrival. Robert Burns would have been proud.

In fact, the spirit of Scotland’s national poet seemed to be hovering in the dining room at the Westin Turnberry Resort that night as well. And just before the haggis was cut open, before the Scotch was then poured onto the succulent collection of meat stuffs and set aflame to christen, crispen and season the already tasty dish, a poem was read. It was, naturally, Burns’s “Address to a Haggis,” which he authored in 1786. A perfect finale in flavor and soul to any Scottish excursion.

Burns’s soul is most apparent not far from Turnberry, in the town of Ayrshire, where he was born and lived most of his life. But his “Address to a Haggis,” while romanticizing the essence and history of Scotland’s most famous meal, does little to prepare the unsuspecting tourist for the national dish. Made from the ‘leftover parts’ of a sheep, it was traditionally prepared by the country’s poor, who would salvage the heart, liver and lungs from their butchered woolen livestock; combine the viscera with oatmeal and spices; and boil the mixture inside the sheep’s stomach. Sounds appetizing, right?

Well, at the Westin Turnberry Resort it truly is; and forever in my mind no trip to Scotland will be complete without at least a taste.

The primary purpose of any trip to Scotland will always be the golf, no matter how good the haggis. And there are few courses in the world as special as the Turnberry Golf Club’s Ailsa. Predating the hotel by four years, the Ailsa Championship Course gave golf along the western coast of Scotland’s Southern Uplands a dramatic boost when it was unveiled not long ago…and by not long, I mean just 108 years now . However, after Ailsa’s original pening in 1902, war interrupted life in Scotland. 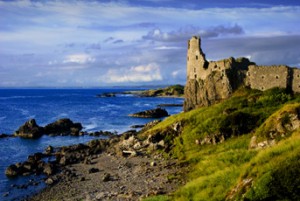 Then, during the Second World War, play was again interrupted and this time the course was excavated, leveled and mostly paved into an airfield for the Royal Air Force, leading locals to believe that golf would never return to the coastline.

And yet, after the end of the war, new life was breathed into the Ailsa links: Mackenzie Ross came to Turnberry and assumed the monumental yet enviable task of restoring the flat landing strips to golfing gold. What Ross accomplished was no small miracle given what he had to do to recover 18 holes, but he did benefit from having a stretch of shoreline skirting the Firth of Clyde and overlooking the Irish Sea that had been left largely untouched.

Today, from the par-three, No. 4 through to the par-four, No. 11, the Ailsa Course runs along the coast and atop the cliffs above the icy waters. This collection of seaside golf holes is one of the greatest in the world and reason that some Americans are prone to referring to the Ailsa Course as the Pebble Beach of Scotland—though after visiting, there’s no mistake that even the great Pebble Beach would be fortunate to be known as the Ailsa of the U.S.

Also within the incredible expanse of ocean holes at Turnberry is the famous lighthouse. Set between the 9th green and the 10th tee, the lighthouse has been shinning out to sea since 1873. And from the small halfway house nearby, where a heater and a dram of Scotch make for a fitting and idyllic turn between nines, golfers can catch a glimpse of Ailsa Craig—a large stone island located almost halfway between golfers on the Scottish coast and those in Northern Ireland. 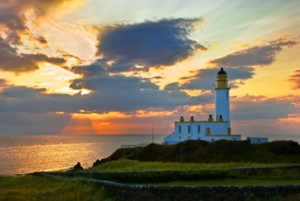 That Clear Sky, It's Not Lasting...Nor Consequential

On a clear day, Ailsa Craig—and sometimes even Northern Ireland—are visible from the hotel; and on a clear night after finishing my haggis and with a Scotch in hand, I stepped outside one last time to look out over the Irish Sea. The next morning, I would return home where the weather and cuisine are all very predictable, but as I looked down on the Ailsa Course and the sun set in the distance, the variability of the unknown became much more immediate. As my caddie had muttered earlier, “If you can see Aisla Craig, it’s about to rain; if you can’t, it’s already raining.”

With the first raindrops landing, I realized that even the tempestuous weather here only adds to the essence of each moment at Turnberry. It’s history, beauty and tradition are so memorable that—even in the worst of Scottish rains—I’d still gladly choose to be on the farthest reaches of the Ailsa Course watching a storm cross the Irish Sea with a pin flag bending violently in the wind 130-yards away, while holding onto a three-wood and little chance of reaching the green.

One Response to “Consuming the Spirits of Scotland”