North of Santa Fe is Where Buffalo Thunder Roams

For all of Santa Fe’s popularity—and all you have to do is sit in the downtown plaza on a sunny afternoon to see just how popular this mountain town really is—golf has never been responsible for attracting travelers to what has long been one of the country’s top-10 most-visited destinations. But, head 15 miles north of the state capitol, to the Buffalo Thunder Resort & Casino, and you will now find greens to join the striking deep blue skies behind the Sangre de Cristo Mountains.

Even without the current 27 holes at Buffalo Thunder’s Towa Golf Resort, this Hilton property is unique to the rest of the nearby city. Owned by the Pojoaque Pueblo, the 395-room resort is big; it houses it’s own 61,000-square-foot casino, a 16,000-square-foot spa and 66,000 square feet of meeting and convention space. There is also an outdoor pool area that seems more akin to what vacationing families in Scottsdale would expect and the bottom floor casino is far more attractive than the slew of nearby gaming options. In fact, there’s enough to do at Buffalo Thunder, did we forget to mention the 13,000 square feet of retail space, that many guests may never even take the drive back into Santa Fe after they’ve checked in.

But, it’s the golf at the adjoining Towa Golf Club that is the most unique attraction in comparison to the City Different’s other world-class resorts. Having opened in 2001, Towa preceded Buffalo Thunder by seven years, and was intended to include four nine-hole routings—two designed by Tempe, Ariz., based Bill Philips and two by Tour
Champion Hale Irwin—within a few years. The first 18 holes to open, made up of the Philips-designed Boulder Nine and the Irwin-designed Piñon Nine, didn’t get off to a great start though. A drought affected the course conditions and it took longer than expected for the second Irwin-designed nine to get built. That routing, the Valley Nine, opened last summer, while Philips’s Butterfly Nine was closed for renovation. Today, call it Towa’s second debut, the course hopes that past water issues are behind it, and after walking part of the course in May, the abundance of green on the course was as apparent as the turquoise embellishments on the tourists inside the casino.

Finding Islands in the Desert

Standing out most is the Boulder Nine’s No. 4, a 186-yard par-three that requires landing the ball on New Mexico’s only island green. But clearing the water isn’t the only hazard on this impressive hole, tee shots must also avoid landing in the sand bunker that wraps around the putting surface. The Piñon Nine, meanwhile, starts off with the strongest of the opening holes, a 631-yard par-five that snakes through the piñons and junipers that dot the sandy mesa surroundings.

The views from the course are some of the best in the area, and playing into a fiery-red New Mexico sunset is something every foursome should at least consider at Towa. The exception to this would be those groups that have an early reservation at Buffalo Thunder’s Red Sage restaurant. Perhaps the only group of aficionados who visit Santa Fe more than its regular influx of art collectors would be those who come for the food. And since Mark Miller opened his Coyote Café in 1987 he’s been one of the culinary stars in town.

Miller ventured outside of Santa Fe in 1992 to open Red Sage in Washington, DC, and grew his reputation among those who had never been to the Land of Enchantment. Now he’s brought a new version of Red Sage back to New Mexico with him. With a focus on the unique cuisine of Northern New Mexico, Red Sage’s best offering is the savory prime rib-eye with a Chimayo red chile rub. For those in the know, the nearby village of Chimayo produces the best red chile in a state that is known for its flavorful peppers and there are few places in the state that use it as well as Red Sage. 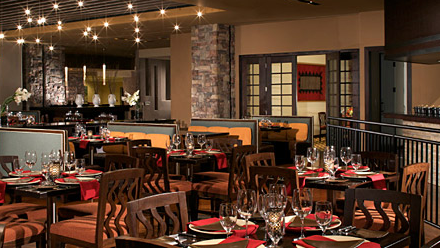 Don't Leave Without Ordering the Red Chile at Red Sage

If Buffalo Thunder can continue to follow Miller’s lead, by mixing the best of New Mexico’s rich culture within its own unique package, the reasons to visit Santa Fe will only continue to grow. And now, you’ll want to bring your clubs.