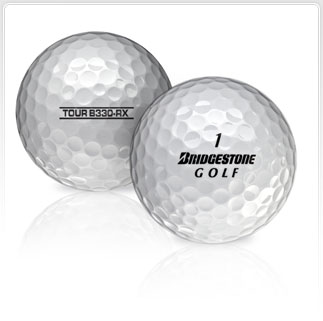 According to Bridgestone, I Should See This Before Every Swing

Sometimes, marketing campaigns are so transparently contrived that I wonder who would ever be tempted enough to actually buy the shtick they’re selling. [See: Nike’s Tiger Woods ad from April 7th, here.]

While other ad campaigns (like those for Progressive Direct’s car insurance comparison service where they compare my rate with other top companies, here) not only work, but they somehow even get me to feel something resembling trust when I think about an insurance company.

The difference is in the promises made. If the campaign is promising something that I can believe – that they’ll at least show me other rates that may or may not be accurate – then I might be nostalgically swayed by some retro makeup and an upbeat personality. Whereas, even if your name is Tiger and you try to stare me down for 30 seconds while summoning your father back from the grave, it won’t make hollow words ring any truer.

So, when I learned of Bridgestone’s online golf ball fitting program I gladly entered my information while retaining some skepticism over just what the computer was going to tell me to put on the tee.

The process takes all of two minutes, at most, and the selection of recommended golf balls is limited to just Bridgestone rocks, but after going through it multiple times, I find that I agree with the program’s recommendation. And, I’m not the only one. Bridgestone’s online fitting results showed that I should be hitting the same pills that a fitting at Hot Stix Golf endorsed earlier (story here). 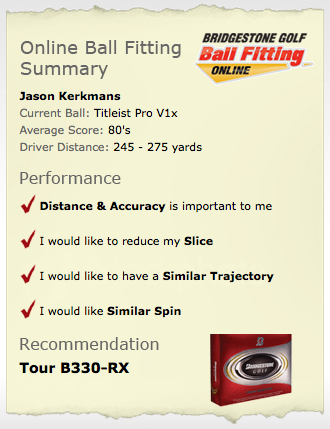 My Results - (and yes, shooting in the 80s on my last two rounds inspired me to perhaps embellish my 'Average Score' answer)

In short, the program asks you to input the golf ball you currently play (and unfortunately for me, “whatever I find in the junk” was not an option), the distance you hit it with the big stick, your average scoring range, and what you’d like to change or keep the same about how your current ball performs. Given that my ball flight, spin and distance can be as inconsistent as the types of balls I find in my off-the-course rummaging, I decided to input my information multiple times switching the balls I prefer to hit (Titleist Pro V1x and TaylorMade’s Penta TP currently) and the results I tend to get (a slice one day is a hook the next). The results were about the only thing that didn’t change: I should be playing the Bridgestone Tour B330-RX.

And so, with a sleeve of B330-RXs in hand I set off with my new cousin-in-law to play at the on-base course at Kirtland Air Force Base in Albuquerque, NM.

The course is a relatively easy test, made most special by the men and women making their way around it. But during our round, the wind was up and threatening to take my ball over one of the fences I knew well enough not to cross. And yet, I only needed to pull one B330-RX from the sleeve that day en route to a happy 86.

I don’t know how much of that score is a result of the ball-fitting program convincing me to give the B330-RX a chance, but afterward I didn’t really care. It was a promise I’ve believed in for the better part of four hours so far and that has been enough for me to stick with it for my next round…even with the noticeable absence of a spokeswoman named Flo.

One Response to “If The Ball Fits, Hit It”