Just down the hill from the empire walls protecting some of golf’s biggest equipment manufacturers used to be the Four Seasons Resort Aviara, North San Diego. But as of this past June, the Four Seasons is gone. In its place, Aviara has been re-branded as the Park Hyatt Aviara Resort.

One thing that didn’t change is the big-for-its-size 7,007-yard Arnold Palmer-designed course at The Aviara Golf Club. It can still leave you whimpering. As many say, the course is ‘strategic’ around the greens (though I prefer to call it, just plain tough). Fortunately, Aviara has always done a good job of keeping you smiling through the pain of multiple three putts, and that doesn’t look to change either now that Hyatt has assumed the reins. Maybe it’s getting to play along the banks of the Batiquitos Lagoon that helps your mood. Having a spa treatment waiting at the Aviara Spa doesn’t hurt either.

Rub-downs aside, a big part of the reason golfers at Aviara don’t get overly upset over putting past the hole is because the staff at the golf course doesn’t pull any punches. Chances are the starter will warn you before you get that first tee in the turf that the 18 holes looming in your future won’t be easy. (Need further proof? The back tees come with a rating of 71.8.) And in good exaggeration theory execution, the starter may even tell you in graphic detail how much masochistic fun you’re about to have.

Chances are you will have fun as you make your way through a series of canyons not far from the headquarters of TaylorMade, Callaway, and Titleist, with the breeze coming off the Pacific, no matter how many putts you take.

And playing just miles from three of golf’s biggest names essentially puts you in the same neighborhood where the Tour pros do their shopping. As you drive in, Phil Mickelson might be the guy in the car next to you as he makes his way to Callaway’s headquarters. Or Sergio Garcia could be the in the Ferrari that cuts you off as he makes his way up the hill to TaylorMade’s facility, simply known as The Kingdom.

Corporate clients and select VIPs are the only ones who can get the Mickelson treatment at Callaway. Same goes for the full-fitting at The Kingdom and at Titleist’s nearby Performance Institute. But for the rest of us not on the invite list at one of the big three, it doesn’t mean we can benefit from being in the neighborhood. In fact, the Aviara Golf Academy was home to the first TaylorMade Performance Lab outside of The Kingdom. And by utilizing the same TaylorMade equipment for so long, the staff offers an similar individual club-fitting experience, open to everyone and at a much lower rate. 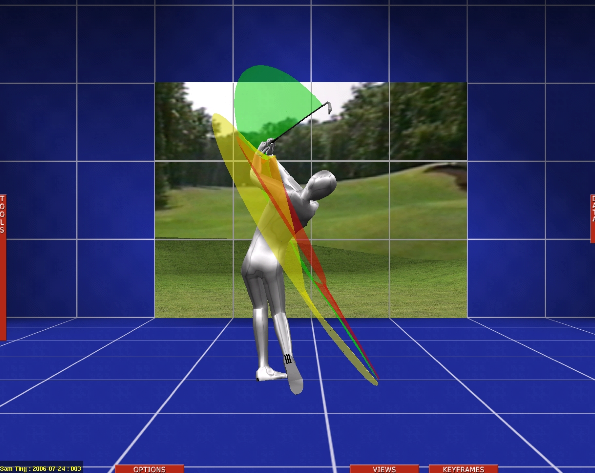 Meet MATT...he's here to help you.

The equipment is called MAT-T, or Motion Analyis Technolgy by TaylorMade, and it uses technology that was first developed to create the lifelike personas seen in movies such as “The Lord of the Rings” and “Spider-Man” trilogies, and “The Polar Express”. TaylorMade then modified that technology in order to gather the exact intricacies of anyone’s golf swing. Nine cameras track the position of 28 special reflective markers placed on the golfer’s body and clubs, resulting in a 3-D animation of you and your swing.

Normal pertinent data, like club head speed, swing path, and loft, lie and launch angles at impact is collected. But so are previously unattainable measurements taken throughout the course of an entire swing. The information is then processed and analyzed by the MAT-T software in order to determine the exact TaylorMade clubs for you.

So, once you’ve finished your first round at Aviara and your ego and putting stroke are a little worse for the wear, book a fitting at the TaylorMade Performance Lab the next morning. Not only will you get the exact clubs you should be hitting, delivered to your room, but the animated swing analysis along with an Aviara Golf Academy lesson will have you ready to face the ‘strategic’ course once again. And this time you won’t need any warning from the starter.