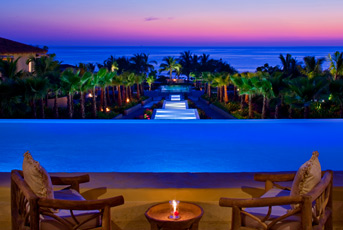 When a vacation appears doomed before takeoff, it helps if you land at the St. Regis in Punta Mita, Mexico.

There are times when you feel you shouldn’t be going on a trip, even before you’ve left for the airport. This started out as one of those times. My wife, Rebecca, was supposed to be traveling with me, and yet because of a booking mishap there I was, on my way to Puerto Vallarta, Mexico, to see the St. Regis Punta Mita resort alone. To say I was not excited to be going would be underselling it like the French did with Louisiana.

Mexico has a way of sneaking up on me though. And as I got out of the car at the St. Regis, the air damp and sticky like coastal Mexico gets in the humid hot months, the pleasant recollections of past trips south-of-the-border filled my pores. After checking in, my mood improved even more as I sipped a cold michelada (I prefer mine with Pacifico beer, hot sauce, Worcestershire sauce, lime juice and salt, poured over a glass-full of ice) on the patio at the resort’s Altamira bar.

It wasn’t just the setting and drinks though, throughout my stay, the friendly St. Regis staff made it impossible to be upset. Their ability to anticipate when I would need a towel before I had even decided to swim in one of the resort’s three pools and when I wanted to be left alone was borderline telepathic. Even better was the resort’s blend of two equal parts: On the one side, there is the expected, palatably refined touches and service that the St. Regis brand is known for, and on the other, surprisingly, was the authentic and friendly Mexico I love. Amazingly, neither seems to overshadow the other.

After the michelada, I returned to my room. My clothes had been unpacked for me, my golf clubs already transferred to the course. There was nothing left for me to do, so I went for swim in the ocean followed by a shower before dinner. As I opened the shower door and realized I was once again under the sun, the cold water mixed with the warm humidity in the open-air patio removed any lingering regrets I had about my trip.

Then, came the golf course. When I got to the Pacifico Course’s well-known 3rd hole, a par-three that tees off on the shoreline and ends on a natural island green 194 yards out into the ocean, I forgot that I had even been upset in the first place. Though the water was high and the hole is only playable at low tides, something I returned for later that day, I was all smiles as I launched three tee shots out over the Pacific, despite the fact that only one landed on the island green. 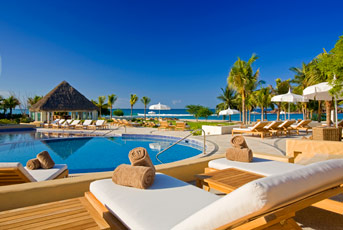 At Las Marietas, You Can Order Traditional Mexican Dishes, like Chilaquiles, Even if They're Not on the Menu

To sustain the now complete satisfaction I was feeling about being in Mexico again, I visited the nearby Bohemian surfers village of Sayulita, and I took an unintended nap in the resort’s exceedingly perfect Remède Spa relaxation lounge. I also indulged in a number of faithfully refined adaptations on the Mexican dishes I hunger for most at home, and ultimately I felt regret for having been upset in the first place. The St. Regis Punta Mita, it turned out, alleviated all my frustrations, and made me long for the chance to return…with my wife this time. Of course, I didn’t tell Rebecca how much she was going to like Punta Mita, when I returned home. Why ruin the revelation.

St. Regis Punta Mita – stregis.com/puntamita – Located within the 1,500-acre Punta Mita community and set at the northern tip of Banderas Bay, the St. Regis is 25 miles northwest of the Puerto Vallarta International Airport.

Beach: It’s hard to beat the beach directly in front of the St. Regis, but if you’re looking to surf, or learn, head 20 minutes north to the ex-pat prevalent town of Sayulita. This coastal village continues to grow in popularity, thanks in no small part to the waves and the excellent fish tacos.

Ocean: Within the last two years, UNESCO declared the three islands off the coast of the St. Regis a Biosphere Reserve. Known as Las Marietas, the islands are an undisturbed sanctuary for birds above water and a rich habitat for marine life below. And if you’re snorkeling there from December through April, there’s a chance you’ll see some of the migrating humpback whales that return here each year.

Mountains: Located in the Sierra Madre Mountains just east of Puerto Vallarta, the more than 400-year-old former gold and silver mining town of San Sebastian was once the provincial capital of the area and had a population in excess of 40,000. Today, there are roughly 600 people living there, who are all worth visiting.

One Response to “The Reluctant Traveler”