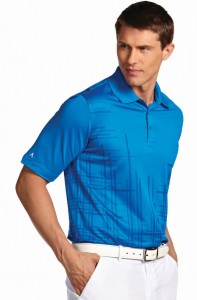 This Antigua "Montage Polo" is in Lapis blue, the same color that was included in our striped polos.

During this morning’s round of golf on the wide fairways and well-guarded greens of Talking Stick’s North Course, three of the four Golf Road Warriors – – Scottsdale 2012 edition – – were wearing the exact same Antigua Desert Dry shirt.  With horizontal blue and gray stripes, the shirt itself is handsome, featuring Antigua’s 2013 line of “pop accent” colors.  In this case, the bold color is called “Lapis,” a much more brilliant hue than traditional blue, but which pairs well with the gray.

The only problem is we either looked like members of a senior golf team, or a trio of clueless dorks.

Since Antigua put the Warriors on the road with six different golf shirts, you’d think no more than one or two of us would show up with duplicate looks.  At least Jeff Wallach wore his almost solid “Apple” shirt, a bold color softened by small lines in a tight checkerboard patterns.  He received many compliments.  And, in fact, no one mentioned a word about the other’s matching wardrobe.  We clearly must have stuffed those shirts well.

What’s more, we all found the Desert Dry technology to be extremely breathable, loosely fitting and comfortable.  It wasn’t so hot that we needed to have the shirt absorb and quickly wick moisture, but in most other months in this part of Arizona, it’s a handy feature for a shirt.

A Good Year for Antigua

Decisions in 2012 appear as if 2013 will be a good year for Peoria, Arizona-based The Antigua Group.  The company was recently named the official golf apparel licensee for the upcoming U.S. Solheim Cup Team, which will compete against Europe in August, at the Colorado Golf Club in Parker, CO.

The Golf Channel Am Tour signed a two-year extension, making The Antigua Group its official apparel fore more than 60 local tours in the U.S. Antigua is also banking on new colors for its spring women’s line, adding brighter hues to its still popular and successful Black/White collection.

“These trending pop colors are used as subtle details, created to appeal to a wide age demographic of both male and female golfers in both of this seasons Men’s and Women’s Golf Wear Collections,” said Sean Gregg, Director of Product Development for Antigua.  Each color combination is designed to be merchandised together and to be presented on the retail floor as a collection, allowing the consumer to pair up merchandise readily for coordinating confidently on and off the course.

Among the other colors in the shirts is “Margarita,” a neon take on lime that is paired with a variety of neutral shades such as steel, silver and white.  Since lime green is an ascending color in today’s market, the company expects this one to be a best seller. Yet another hot color a lemon-drop yellow known as “Zest,” which also goes well with smokier shades.  The “Melon” orange may be a bit too bright for my taste, but Wallach also pulled that off a couple days ago.

Color aside, I choose golf shirts by how well it feels, especially in hot weather.  I want a shirt that breathes, doesn’t restrict movement and dries out.  Hitting out of a bunker with a sweat-soaked top is going to leave you with a grit-covered shirt.

Said Antigua in a recent release: “This season new performance fabrics were developed with finer yarns to create ultra lightweight knits in textures and in flat jerseys and interlocks that update the hand, drape and appearance of the traditional polo.  By using the finest denier yarns available, Antigua has achieved super soft, super lightweight fabrics that provide the same coverage as other poly knits, but allow for faster wicking, additional breathability and less restriction in movement.”

This Golf Road Warrior thinks they’ve done it for 2013.  Now, if only we can get our colors straight and unmatched tomorrow.