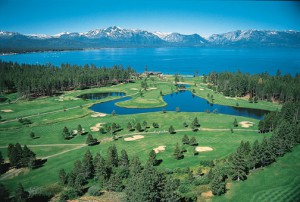 On the southern shore of cobalt-blue Lake Tahoe is the Edgewood Tahoe Golf Course.

High Sierra cabins shuttered against snow began opening around Memorial Day, as owners raked pine needles into bags and fired up Webbers for the first time in months. Ski shops closed, kayak and cycle rentals emerged and thanks to a mild winter many golf courses opened before June. And from Nevada’s Carson Valley to North Lake Tahoe and beyond to Plumas County, the robust fairways and fast greens were in remarkable mid-summer form.

Exactly a year ago and in many seasons past, most of these courses would not be playable for another three or four weeks.

The fast breaking springtime start to the summer of 2013 was clearly evident during the recent 15th Annual Tahoe/Reno Media Tour, managed by public relations guru Phil Weidinger.  Mostly a treat involving fine accommodations and late nights at culinary hot spots with resident characters, civic boosters and business representatives, the tour is at times an ordeal for those foolish enough to play 36 holes daily for six straight days.  But with major league leg cramps serving as a wake-up call, even the most fuzzyheaded scribe makes the morning tee times.

On The Nevada Side

While they don’t always get as much attention as the scenic High Sierra courses, Reno has more than its share of challenging layouts, including the Red Hawk Golf and Resort, LakeRidge Golf Course and the Montreux Golf and Country Club, which hosts the PGA Tour’s Reno Tahoe Open.  My tour started down the road in the Carson Valley, at the Eagle Valley West Golf Course.  One of two public golf courses priced to draw a healthy volume of players, the West is a desert links-style track that is home to a den of coyotes, which we unfortunately didn’t see.

Dinner that night was at the San Marcos Grill in Carson City, a family-owned and operated Mexican grill and tequileria, which features several large tables to accommodate groups and especially large families.  Most memorable was the spicy guacamole, prepared from scratch with fresh ingredients, right at the table.  Afterwards I stayed at the Hampton Inn & Suites, from which I wished I could have slipped away with an unusually comfortable bed, with the mattress strapped to the top of the car.

The Genoa Lakes course sits at the base of the Carson Range.

In any event, the morning started with a round at the Genoa Lakes Club, which sits at the base of the looming Carson Range.  A well-maintained 6,851-yard layout, it bears distinctive touches of co-designers Peter Jacobsen and the late John Harbottle, who cherished tall and dense rough around bunkers and near greens.  Weaving around small lakes, the course features a particularly monstrous par 5, with the 13th hole playing at 652 yards from the tips. The following 14th hole is magical, seemingly the most remote part of the course, with a tee surrounded by cottonwood trees and a green framed by still more.

The peace of the round at Genoa was abruptly changed by a nerve-rattling drive up the Kingsbury Grade, with switchbacks carved into rock and striking vistas that one simply can’t look at while behind the wheel. Topping out at 7,344 feet at Daggett Pass, where State Route 207 passes the Heavenly Valley ski resort and then drops into Stateline, which is the home of Harvey’s and Harrah’s Casinos and the Edgewood Tahoe Golf Course, our venue for the afternoon’s round.

Designed by uncle-nephew team of George and Tom Fazio, the Edgewood fairways and greens are surrounded by tall pines, a sylvan setting that makes the course looks as if it would be at home in Washington State or Central Oregon.  With gentle elevation changes, it offers striking views of Lake Tahoe and the Desolation Wilderness on the opposite shore (see first photo, above). Edgewood is by far the most well-known course in the High Sierra, because of its provenance, quality and the 24 years that it has hosted the American Century Championship, the rare golf tourney featuring sports and entertainment celebrities – – only a few of whom play truly excellent golf – – which is broadcast nationally by NBC Sports. Charles Barkley is a regular in the late July event; this year Sir Charles, the Round Mound of Rebound, is a prohibitive 500-1 favorite. 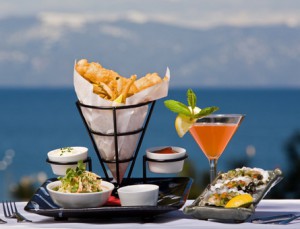 Fish and chips with a Mangotini at Wolfdale’s with a view of Lake Tahoe.

Tahoe City is the gravity at the north end of the lake, with large grocery stores, shops catering to tourists, bike-rental outlets and more.  It also has several fine restaurants, including Wolfdales, which since 1978 has featured East-West fusion dishes that new grow old.  Opened year-round, it features seasonally fresh ingredients.  I ordered a killer Tamarind Thai Seafood Stew, with prawns, scallops, cod and purple Thai rice.

Two of the most spectacular courses in the High Sierra are private facilities, the Tom Fazio designed Martis Camp course and the Tom Weiskopf designed Lahontan Golf Club.  However, within a few miles and just outside of Truckee are several courses open to the public with almost identical bones and qualities.  The Great Recession took a toll on the region’s golf facilities, forcing some bankruptcies and ownership changes.  But all of the Truckee area courses managed to survive and now appear in good physical and fiscal shape.  Over two days I played four of them, and a brief description of each follows:

Coyote Moon Golf Course sprawls over 250 acres of secluded mountain terrain, with huge pines, stunning granite outcroppings and not a home in sight.  Designed by Brad Bell, it is a total test of golf, with medium-sized greens guarded by water, bunkers and trees. While the landing areas on its fairways are ostensibly wide, they don’t appear so, which brings thinking into every swing.  For every downhill shot there is another that must go uphill.  Everyone’s favorite, and I mean everyone, is the par 3 13th, which drops roughly 200 feet from tee to green, and can be played from tees from 108 to 227 yards.  Depending on wind, the hole can play from one to three clubs less than the yardage.  Trust the starter; he knows the pin position and conditions and gives sound advice.

Tahoe Donner is the dowager Queen of the High Sierra, the first championship mountain course in the region, opened in 1976.  Tahoe Donner’s front nine was designed by Roy Williams, with the back was done by Billy Bell, Jr. In 2006 the track was totally renovated, which earned it a nomination from Golf Digest as one of the best-remodeled courses in the country.  Its greens are also considered some of the finest in the Tahoe area, with putts that run fast, straight and true.  Because it’s some 700 to 800 in elevation higher than most other Sierra courses, Tahoe Donner’s fairways were not yet summer firm in early June.  But with scenic views and fairways cutting through the pines, Tahoe Donner may be a dowager, but she’s still a royal golf course.

The Golf Club at Gray’s Crossing is a Peter Jacobsen and Jim Hardy design located a few miles east of Truckee.  With fast greens and lush fairways lined with the omnipresent pines, Gray’s Crossing is more traditional than many other Sierra courses, with less severe elevation changes.  The course is surrounded by mountains, but doesn’t play like it’s atop one.  Gray’s Crossing also has a personable head pro named Travis Alley, who has not yet passed his 30th birthday, hits the ball a country mile and is preternaturally patient while giving on-course instruction to Los Angeles Times Sports Columnist TJ Simers, who alternates non-stop technical swing questions with equally non-stop trash-talk over a $5 wager that’s pressed several times. With wisdom that transcends years, Travis ensures the match is a tie. 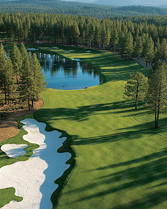 This Old Greenwood par 5 is guarded by a long bunker and snaking lake, a diabolical Nicklaus hole.

Old Greenwood may be the best traditional golf course in all Reno/Tahoe, a Jack Nicklaus Signature Design that opened nine years ago, and run by its original head pro and long-time High Sierra fixture Bob Hickam.  Along with Gray’s Crossing, it is part of the Tahoe Mountain Club, which gives members access to Gray’s Crossing and Old Greenwood, facilities at the Northstar Ski Area and at Lake Tahoe itself.  Here too is  The Golf Academy at Old Greenwood, one of the the region’s premier teaching facilities, from the full swing to a computerized putting analysis system.  Led by Keith Lyford, the Academy was fully booked with students through the month of June.

In 2013, Truckee is celebrating its 150 anniversary as a frontier town, and its 20th year of incorporation.  With a vibrant old downtown, Truckee’s small businesses draw shoppers and diners year-round.  I had dinner one night at the legendary Bar of America, which is as much a watering hole for locals as for tourists. 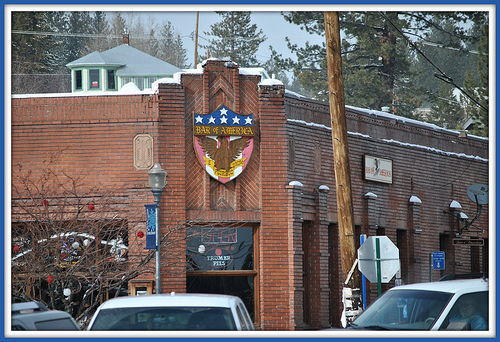 I also had the honor of spending the night at the Donner Lake Inn, a small bed & breakfast located near the west end of the eponymous body of water.  Run by Mindy & Paul Oesterman as a semi-retirement venture – – who after studying B&B’s for some  time purchased it about a year ago – – Donner Lake Inn has five suites that are usually full.  Indeed, Mindy serves daily gourmet breakfasts, afternoon beverages and appetizers, and finds herself more busy that she ever expected.  I don’t usually eat breakfast, but she sent me off to my final round of the tour with two large slices of warm and scrumptious homemade banana bread – – right out of the oven.

My final stop on this tour was Grizzly Ranch, nestled in a valley where the Sierra Nevada and Cascade ranges meet, about an hour’s drive from Truckee, near the town of Portola, population 800.   Opened in 2005, the Bob Cupp design can play up to 7,400 yards, but has five sets of tees to accommodate all levels of player.  While part of the gated Grizzly Ranch Development, the club offers private memberships as well as reasonable public rates given the course quality.  The regular rate, with a cart, is $115, but members of the Northern California Golf Association can play for $105, with a box lunch included. Given the quality of the course and its remote and quiet nature, it’s a deal.