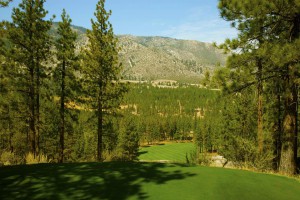 Tee shots on the third hole at Clear Creek Tahoe seem to hang in the air for a full minute, dropping some 200 feet.  Photo by Rod Hanna

I have a friend who is an aficionado of golf course architecture, rates them for a major magazine and grows downright emotional during voluble arguments about relatively attributes and qualities.  So it wasn’t entirely surprising when he was moved to choked silence and near tears when Clear Creek Tahoe, a sublime Bill Coore and Ben Crenshaw design in the mountains between the east side of Lake Tahoe and Nevada’s Carson City, shut down during a foreclosure in 2011 – – just two years after it opened.  Photos of grass growing up in the middle of bunkers only worsened the pain.

In the depths of the Great Recession nearly everyone in the 99 percent had a rough time, including another golf course and real estate development on the north side of Lake Tahoe, near Truckee.  Originally known as the Timilick Club – – with the course designed by the late John Harbottle and Johnny Miller – – new ownership had just rebranded it as Schaffer’s Mill.  As I wrote three years ago in The A Position, the ambitious plans for a fascinating golf course and property were off to halting start.

However, come June of 2014, spring is coinciding with a wondrous resurrection at Clear Creek and Schaffer’s Mill, two examples suggesting that golf and economics in the High Sierra are once again healthy and verging on the robust.  A private club, Clear Creek re-opened in 2013 and is now showing off a meticulously maintained course and freshly paved roads to prospective members, infrastructure that will also serve roughly 300 home sites on the 1,600-acre property.

For more than a decade developers tried to make something of this parcel of land around Nevada’s Clear Creek, just up the road from Carson City.  At least three architects prepared routings before Bill Coore was asked to take a look.  He and Crenshaw had never done a course in Northern California, much less one exactly like Clear Creek.  And even before agreeing to scout the site, Coore expressed reservations about the mountainous setting, which can have terrain too severe for strategic course design and soils too poor for good maintenance.  But Coore then began to look around, look around and look around.

Indeed, he walked the property during two more five-day visits, ten days total, before he finally envisioned a course and agreed to sketch a routing, a result that actually surprised the veteran architect. “There is no substitute for a spectacular natural setting,” says Coore.  “As designers, we look for sites where the terrain presents interesting situations and where there is an interesting backdrop for the movement of the land. This is a very surprising piece of property – an area of great contours, elevation changes, vistas.  And it’s walkable! It’s a mountain golf course, but it doesn’t feel that way. We think golfers will find a unique golf experience at Clear Creek Tahoe, and we hope every round includes some of that spirit we felt when we first came here.” 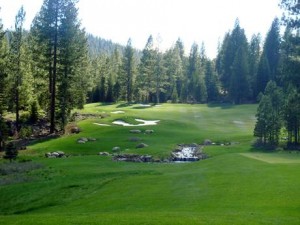 The view from the tenth tee at Schaffer’s Mill. Photo by Rod Hanna

Indeed, very little earth was moved during construction.  What’s more, Coore summarily handled the elevation changes at the third hole, with a drive that drops 200 feet from the one of the highest points on the course to the lowest; all other slopes are gentle. With natural contours, prominent rock outcroppings and bunker shapes that mimic the surrounding mountains, the course offers several blind tee shots.  The greens here are large and wildly contoured in places, and turf everywhere is in perfect condition – – thanks to Superintendent Mike Cunniff.

The Massachusetts native cut his teeth as an assistant at the Charles River Country Club, a Donald Ross design that opened in 1921.  He also worked at another Coore-Crenshaw design, the Old Sandwich Club in New England.  “Back there my main challenge was drainage, drainage and drainage,” says Cunniff.  “Out here it’s irrigation, irrigation, irrigation.” Fortunately for Clear Creek, the 192 acres dedicated to the course – – which can stretch out to more than 7,000 yards at the tips – – is supplied with treated water from Incline Village.

Head Professional Colin Campbell, who moved here from Scotland in 2009 and decided to stay with the project even during the dark years, is being rewarded in several ways.  Because Clear Creek will have a limited number of members, he’ll run a golf shop without tee times.  Second, “My barometer for a great course is, is it memorable?” poses Campbell.   Clear Creek “reminds me of the old, classic courses in Scotland, the character.  It fits the land beautifully and looks so natural.”  And finally, he gets to live near Lake Tahoe.

Unlike Clear Creek, Schaffer’s Mill never closed.  But while also planned as a private course, it has been open for some public play to help it weather the economic storm, although that window may eventually close. Most encouraging of all is construction work on several home-sites on the 475-acre master planned community. The utter quiet on the course two years ago is now broken by economic activity, and in north Lake Tahoe and Truckee that is a welcome sound indeed.

Moreover, Schaffer’s Mill is today offering a remarkable stay and play package from July 4th though the 7th for only $399, including a round of golf, a summer concert, poolside festivities and accommodations for two for three nights at either Schaffer’s Mill Mountain Lodge, The Cedar House Sport Hotel, the Hampton Inn Suites or The Ritz Carlton – – all of which would normally be a $1,169 value.  The property is also unveiling its new Schaffer’s Mill Tennis & Racquet Club. 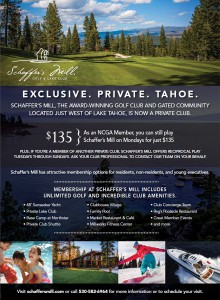 That’s only a few of the amenities Schaffer’s Mill will offer residents and members.  In addition there is a private club on Lake Tahoe, access to a 48-foot Sunseeker Yacht and the Base Camp at the Northstar Ski area, a fitness center and restaurant on the property and more.  Open to reciprocal for members of other private clubs, it is offering members of the Northern California Golf Association a chance to play the course for $135 on Mondays.