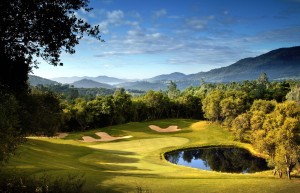 The target at the 13th hole of Greenhorn Creek.

In 1848 a wave of humanity swept into Alta California’s central Sierra foothills, drawn by the discovery of gold.  To the thriving settlements of San Andreas, Angels Camp and Murphys, merchants, opportunists and curious observers followed the miners.  Some of the more notable included Daniel Webster, William Hearst, J.P. Morgan, Ulysses S. Grant, John Jacob Astor and a young journalist with the pen name of Mark Twain, all of whom stayed in the Murphys Historic Hotel, where several original musty rooms still freeze time from the second half of the 19th century.

While the gold rush largely ended seven years later, waves of people continue to flock to the region even now.  During warm summer days some of those visitors still pan for gold in the area’s streams – – or go white-water rafting down its rivers.  Others explore abandoned mines – – or the enchanting natural caverns with underground lakes and unusual crystalline formations.  Still more go hiking, biking or ride zip lines, after which there are tastings at one of the two-dozen wineries in the county, shopping at art galleries and antique shops, visiting a gold rush museum, and dining at a number of remarkable restaurants. During winter, skiing and snowboarding is nearby in the High Sierra.

Home to Twain’s celebrated Jumping Frog and an eponymous contest each May, Calaveras County is also a place for excellent year-round golf.

On a recent visit to the Greenhorn Creek Resort and its award-winning Robert Trent Jones II redesigned course, we experienced a small sampling of what the region offers travelers, including several wineries – – more about which in another post.  And as memorable as anything else during the trip, our small group of journalists were given a hands-on lesson in making those green amphibians leap, by a couple of veteran Jumping Frog Jubilee wranglers. 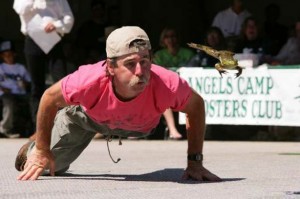 Although I’ve been through Angels Camp several times and played golf at a few of the region’s courses – – which in retrospect I uniformly much enjoyed – – I hadn’t previously paid much attention to Calaveras County as a destination.  My bad.  It’s only a two and a half hour drive from San Francisco, an hour-and-a-half from Sacramento and is located pretty much between Lake Tahoe and Yosemite.

Along with the Saddle Creek golf course just down the road in the town of Copperopolis, Greenhorn Creek shares honors as the region’s premium course.  With five sets of tees that range from 4,882 to 6,749 yards, the layout offers firm fairways that yield prodigious rolls on tee shots, and wickedly fast greens that played at 11.5 on the stimp in late October.  While by and large a friendly and forgiving course, it does pose challenges with several short par 4s, such as the 325-yard 12th, which is a severe dog leg right with a narrow fairway flanked by ditches on each side to a green that’s decidedly up a hill.  The 13th provides some relief – – so long as you miss the pond on this steep, downhill par 3.  But it’s back to focusing on the next hole, a 415-yarder that’s also narrow and is listed as the third most difficult on the course. 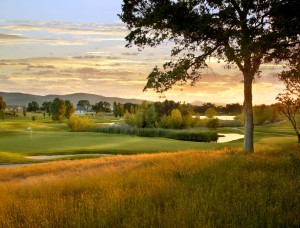 Walk away with a par or bogey on Greenhorn Creek's 5th hole and one can sigh with relief.

Then there is the 5th, the green of which is in the photo on the left.  What the image doesn’t show is that you have a narrow fairway with water to the right, and out of bounds to the left.  And to reach that green with the water guarding it, most players will be forced to lay-up or hit a second shot that must travel 170 yards.  It’s listed as the second hardest hole on the course, but has a much higher pucker factor than the number one handicapper.

Since Greenhorn Creek has an active full-time membership engaged in all manners of sporting and social activities, its facilities include an exercise and weight room, a large pool and a couple of tennis courts.  Its CAMPS Restaurant has a first-class menu, with the good burger you’d expect at a golf course, but also dinner items that include steamed clams, roasted duck breast with truffled risotto, and, along with several cuts of steak, fresh pan-seared scallops, not the cuisine normally found at a golf course.

The resort offers a number of “stay & play” packages, starting at $109 per person for at least two players during midweek, and yet only $135 per person during weekends.  There’s an eclectic set of accommodations, including the least expensive rooms at a time-share condominium complex. Run by WorldMark, the multi-bedroom units include a kitchen and living room, and are what you’d expect by a budget-conscious traveler.  At the other end of the spectrum is one of bright and freshly decorated cottages near the course, with two or three bedrooms and kitchens that are open to living rooms. 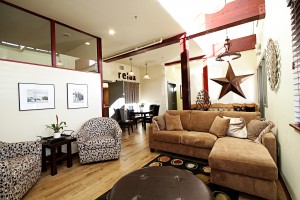 The latest wrinkle in Greenhorn Creek accommodations is the Caddy Shack, a barn-like former business office that was recently conferred to a five-bedroom hang out.  Situated near the golf course’s ninth hole, the Shack is geared for groups of up to dozen.  With a barbeque area, horseshoe pit and a living room with 55-inch high definition television, it’s advertised as a place for “friends, family, teams (and) business groups.”

Our group was treated to an authentic Angels Camp experience when we were met by officials from the Jumping Frog Jubilee, which for the past 80 years has been each May during the Calaveras County Fair.  Inspired by the 1865 story – – The Celebrated Jumping Frog of Calaveras County was actually Twain’s first published piece of work – – the contest attracts serious participants.  Some families and groups have been at it for generations, such as 2005 champion Joe Kitchell, an Angels Camp native who’s been with the Calaveras Frog Jockeys for some 25 years.

Each year new frogs are captured a couple months before the event and released right after.  While the critters aren’t exactly trained, wranglers understand what motivates them.  “The life cycle of the frog is to eat, not be eaten, and to breed,” explains Kitchell.  “Our job is to make them think they’re going to be eaten.” 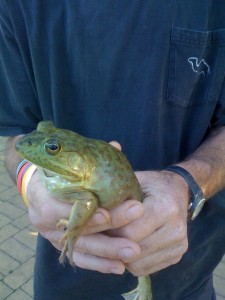 One of the frogs we jumped on the visit to Greenhorn Creek.

In the contest, frogs are held back the back of the neck, pinched between two fingers.  The jockey often strokes the frog’s legs, to relax it.  It is then set down in a small circle, after which the wrangler attempts to frighten it into jumping three times – – hopefully straight out.  “You try to find frogs that don’t jump in different directions or back and forth,” Kitchell, “since the distance is measured from the circle to the landing of the third jump.”  But too much experimentation is counter-productive, since the more they are handled, the more docile the frogs become.

At the start of each jump a wrangler takes care not to stand above the frog, because it has exceptional peripheral vision and might freeze if it sees the person.  The trick is to make a loud noise, thump the ground and blow air at its butt, inducing that primal fear of consumption by a larger animal.

The world record, set in 1986, is 21 feet 5 and ¾ inches.  Each year the winner usually makes three hops that average 19 to 20 feet.  None of us rookies could get our reluctant frogs to hop more than ten.