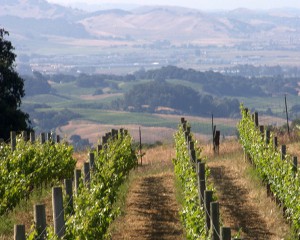 High above the floor of the Napa Valley, the Brandlin vineyards drained well during 2011’s damp summer.

With nearly all of the Napa Valley’s 2011 Cabernet Sauvignon now released, critics agree that the unusually cool and wet summer yielded a slew of ordinary wines – – and yet others which mirror the great cabs that defined the region some three decades ago.

Indeed, big producers with vineyards that didn’t drain well ended up with sub-par fruit, at least by Napa Valley standards.  Smaller producers such as Cuvaison – – which handcrafts the Brandlin Estate Cabernet Sauvignon with grapes from its Mount Veeder vineyards – – made softer and more complex wines straight out the 1980s, ones that may actually age longer and better than more recent vintages.  Call it the Year of the Throwbacks.

Northern California summers typically have enough sun and warmth to produce harvests that allow vintners to purposefully make just about any style of wine desired. But Napa Valley earned its early reputation with Cabernets analogous to the subtle terroir-influenced wines of Bordeaux, where unpredictable weather always has a variable impact on the finished product.  Today’s most acclaimed Napa cabs are invariably big, with a relatively high alcohol content and a jammy thickness that hangs on a receptive palate. It’s what impresses and sells at the high end of wine.

However, in the summer of 2011  Mother Nature simply didn’t cooperate. From June onward a true summer never fully developed. October brought rain that not only further delayed the harvest, but forced growers and vintners to dump grapes with signs of mold or rot.  Some still tried to make the monster wines, others didn’t bother to send releases to critics.  But a few others rolled with the conditions of the season.

Tor Kenward Family Wines was one of the latter.  A former Beringer executive who today makes some of the most esteemed wines in Napa Valley, Kenward believes that the better winemakers “turned adversity to their advantage” in 2011. “The crop was minuscule, and ensuring quality meant more pruning and diligent sorting before the crush,” he explains. “A whole lot more work, for a whole lot less wine.  But we really like what did make it to bottle.”

It was an experience shared at Cuvaison.  “It was our latest vintage ever, with Cabernet Sauvignon being harvested on our Mount Veeder estate

in the second week of October,” says Steven Rogstad, head winemaker at Cuvaison since 2002.  “The steep, free-draining soils and mountainside exposure of our Brandlin Vineyard helped keep the soil dry and our fruit profoundly concentrated in what was a cool and late ripening season.”

Founded in 1969, Cuvaison prides itself on block-by-block farming methods, and a hands-on vineyard-to-bottle winemaking approach.  Its proprietary grapes come from Mount Veeder and from vineyards in the Carneros American Viticultural Area just North of San Pablo Bay.  Its wines typically favor nuanced nose and taste notes over brute ripeness and power.  Consequently, 2011’s weather was right up Rogstad’s alley.

The Brandlin cab also required a good deal of Rogstad’s attention in both crushing and blending.  Some 85 percent of the 2011 bottling is from Cabernet Sauvignon grapes, which are balanced with 9 percent Petit Verdot and 6 percent Cabernet Franc, which add to the wine’s complexity.  It was  aged for 22 months in small French oak Bordeaux-style barriques.  As Rogstad describes it, the “wine showcases red and black currants on the nose with boysenberry, black cherry and an intriguing hint of black tea. The bright mountain fruit is fleshy and dense and backed with some warm caramel, toffee notes and a long, cassis laden finish.”

San Francisco Chronicle wine editor Jon Bonne called it “a great snapshot of the Brandlin family’s historic plot. Give it air to mellow the camphor and oak notes that come first  . . . and find juicy mulberry and currant fruit, plus black olive, and a classic Veeder vitality to the tannins.”   The Brandlin 2011 Cabernet retails for $60 and is 14.5 percent alcohol.