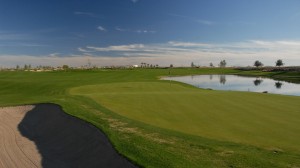 After fighting the cactus and scrub of desert golf, Encanterra's spacious fairways are easy on the eyes.

We played this Tom Lehman design, part of the Trilogy Golf Club group, when it first opened in 2008.  After four days of fighting rocks, cactus and other desert hazards that can definitely wear a golfer to a ragged pulp, the flat and largely wide-open course held our interest and yet wasn’t overtly penal.  Two of Encanterra’s short par fours are among the most interesting of their type we’d seen; one is protected by water to the left and behind the green, while the other is almost totally surrounded by bunkers.  But two years ago, just as the club began recruiting members and work began on a new clubhouse complex, the golf and real estate market was already into its 30,000-foot plunge.

We loved the Encanterra course and often worried about its fate.

Upon our return this December we were delighted to see the finished clubhouse and a growing membership. Indeed, the club sports three swimming pools, one of which is indoors, and an open exercise area and a weight room.  Its clubhouse is well-appointed and the cost to join is modest.  (Call membership and marketing manager Ben Keilholtz, at 480-367-3784.) Trilogy’s stiff spine and resolve kept the place developing.  And the course is just as good and perhaps better than when it opened.

Located in Queen Creek, which about a 30 minute drive from Scottsdale, Encanterra won a Top 10 New Private Course distinction from Golf Magazine in 2009.  Lehman’s design is for this region a rare “core-style layout,” which means the route moves inwards and away from existing homes and planned residences.   In the distance are panoramic views of the Superstition and San Tan mountains. 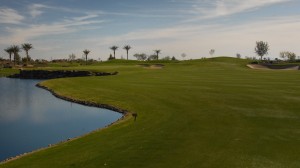 Number 12 at Encanterra is a short par four and one of the most fun holes to play on the course.

With nearly 150 acres of turf – – as compared to about 80 acres on most desert courses – – the 7,172-yard layout also has eight lakes that bring water coming into play on a number of holes.  On the par three ninth hole, tee to green is 218 yards and nearly all over water, and while there is bailout room to the left, the invitation to go for the flag is an offer that can’t be refused.  Finally, although Encanterra sits on the Sonoran floor, it is not a course that’s of the desert.  In fact, when its trees mature over the next 20 years, it will look more like a parkland course, which in a land of gravel and cactus is a welcome change, a track that’s on the desert, but isn’t of it.