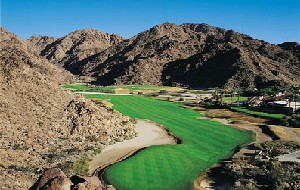 Day two of the Palm Springs Golf Road Warriors invasion of the Coachella Valley – – brought to you by Callaway Golf, TravelPro Luggage, Grow the Game Golf, the Southern California Golf Association, AUR, the Palm Springs visitors bureau and a host of golf courses, resorts and restaurants – – was initially focused on a round of golf at the La Quinta Resort’s Pete Dye-designed Mountain Course.  It concluded with dinner at the enormous, multi-roomed and jam-packed Jacklope Ranch restaurant, where barbecued ribs and brisket rein supreme.

Much of the La Quinta course does indeed closely hug the mountains to the south side of the valley, with green fairways closely flanked by hard boulders and splintered rock, eroded from the slate-like walls that soar a thousand or more above.  Like many of the courses we’ve so far played, La Quinta Mountain is not terribly forgiving.  Like a beautiful person – – man or woman – – it brings pleasure and contra-pleasure for shots both well-executed and those off just an inch, and it depends more on the whims of the course than the player.

In any event, temperatures exceeded 90 degrees today – – in February, and in the Northern Hemisphere.  Take that, Oh Canada. 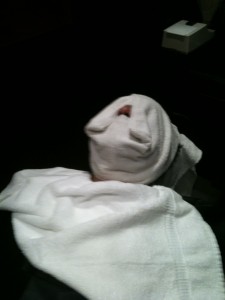 Kessler, getting ready for his shave and looking like he's about to be water-boarded.

After the round we headed over to an appointment at La Quinta’s new Havana Club, the desert’s new “Premier Cigar Lounge and Barber Shop.”  It’s a so-called “perfect hideaway where guys can, “Hang out with the boys, get a haircut and shave, or simply enjoy an après-golf cigar and cocktail. With several flat screen HD TV’s, the Havana Club Cigar Lounge is the perfect place where you can relax, unwind and take in a game while enjoying premium cigars.”

African-Americans might stifle a rueful laugh, since these types of barber shops have been central to their social structure an culture for decades and perhaps a century or more.  But for many Americans, a good shave is something of a necessity – – but what was once a real luxury – – that’s been lost.  Disposable razors and electric shavers made it easy to get rid of facial whiskers at home, cheaply and quickly.  The quality of a barber shop shave has been lost on at least three or four generations.

Ah, but in the early 1990s I wrote s piece for Health magazine, rating all types of shaves.  My then-girlfriend, the Fabulous Miss Suzie – – and now my wife of some 17 years – – judged the results.  Ironically, an old double-edge blade was far better than the modern multi-blade razors, despite all the research and materials technology.  But the best shave by far, as Suzie judged it, came from a barber shop, with a skilled barber using a straight-edged razor.

A veteran San Francisco barber, who’d been shaving clients since the 1930s, let me onto his “secrets.”  It was really the time spent applying hot towels, before and after the shave, that made the razor-work so smooth and efficient. 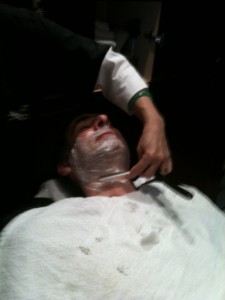 Wallach looking like the Sopranos are about to whack him, get the smoothest shave of his life.

And so I watched the two barbers at the Havana Club work over Wallach and Kessler, covering their heads with towels as if they were about to be water-boarded, and then pampered with creams, ointments and more hot towels for nearly a half-hour.  A half hour for a shave is along time.  At home I do it in 45 seconds.  But a barber shop shave is something any man should have at least once before beaming up to the Final Existential Enterprise.

Oh, and if you live to tell about it, tasting tequila at the Hyatt Grand Champion’s Agave Sunset is yet another Great Treat.  Assistant Food and Beverage Manager Kris Erlenbusch put us through a series of light to more-aged tequilas, including a special lot produced for the hotel by my friends at Herradura Tequila, who have been making premium firewater since 1870.

That and the Jackalope was a fine ending to the GRW’s second day.  Tomorrow brings two rounds of golf, star-gazing and another fine dinner.  Stay tuned . . .