There are sensory signatures common to most golf courses in the mountains along the Northern California and Nevada border.  Fairways often appear to unfold like natural meadows flanked by soaring evergreens, creating a cathedral of quiet broken only by rustling branches or glacial water tumbling down a rocky creek.  Brisk mountain air carries potent aromatic molecules of fir and pine.  With these conditions, there’s no such thing as an unpleasant High Sierra track. 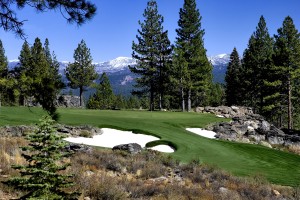 The 17th, a dramatic Martis Camp par three set on a rock outcrop.

While the region around Lake Tahoe and Truckee features more than a half dozen excellent and even stunning layouts, a course that opened just two years ago could well supersede all others.  The centerpiece of an eponymous development that’s been described as a “private-gated national park,” the Tom Fazio-designed Martis Camp golf course blends sublimely into its surroundings, with tees that frame views of nearby Lookout Mountain and its Northstar-at-Tahoe ski runs, vistas of the rugged ranges to the east and west and several fairways that traverse the environmentally sensitive Martis Creek.

Design variety makes each hole distinctly memorable, including several that appear to offer dangerous and yet seductively inviting shots.  Fazio took great advantage of natural elevation changes and was allowed to route the course without regard for future home sites.   Its classic bunkers are deep – – and in some cases look more intimidating than actually in play – – and yet are largely invisible when one looks back at a fairway from the green.

Nearly all of the gently sloped greens – – fashioned in a characteristically Californian style – – include subtleties in the surrounding areas that will give players safe bailout areas.  A couple feature entryways for a crafty roll-up punch shot, even when the pin is tucked behind a menacing bunker.  Others have shaping that will produce an occasional “member bounce,” a kindly thought in age when many architects create courses that punish average golfers.

However, at 7,751 yards from the tips, length renders the 6,000 feet of altitude irrelevant.  Even with course knowledge and a helpful caddy, the meticulously conditioned Martis Camp is no cupcake.  With an assortment of risk and reward shot values, it is perhaps the most fascinating course in the Sierra.

In an interview shortly after Martis Camp opened. Fazio acknowledged that: “I wouldn’t be surprised if some people say it’s as good as any course I’ve ever designed.”  That’s saying a lot, since Fazio had 13 original designs on Golf Digest’s 2009-2010 “100 Greatest Courses in America” list.  On the magazine’s 2009 Best New Private courses ranking, Martis came out of the box at number three.  Speaking privately, several Golf Digest course raters who have played Martis Camp believe it will slip into “America’s 100 Greatest” when the 2011-2012 ratings come around.

Much More than Golf

Despite the quality of its course, Martis Camp is much more than a golf community.   It is the creation of the Arizona-based DMB Associates and the Highland Management Group, which previously developed other five-star residential golf club communities such as Forest Highlands in its home state, and the Lahontan property that sits adjacent to the Camp. “This community is unique in that it covers all four seasons of the Lake Tahoe region,” explains Mark Johnson, Martis Camp’s general manager and executive vice president.  “And for as much as we make of it, golf is probably the third or fourth most important aspect of the development.” The lift direct from Martis Camp to Northstar-at-Tahoe

Indeed, some members who purchase one of the 653 home-sites scattered over the development’s 2,177 acres – – it’s about halfway between Truckee and the Northstar-at-Tahoe Resort – – may enjoy the place more in winter, when the course is covered by six feet of snow.  I know one Lahontan resident who bought a Martis Camp site primarily so he could have access to the private ski lift that runs from the development to Northstar.  The lift and skiing is a prime wintertime draw.

The Martis Camp property is also laced with roughly 20 miles of summer hiking and biking trails, and tracks for cross-country skiing, snow shoeing and sledding in winter. It features an 18-hole Dick Bailey Putting Park, a large and well stocked fishing pond, and sporting fields for bocce ball, croquet and lawn bowling.  Tennis courts, with both clay and hard surfaces, are planned for the near future. And no matter the season, the action never seems to stop at the big red building known as The Family Barn.

Opened last summer, the Family Barn quickly evolved into the community’s social center. To simply list what’s available in the cavernous red is to miss the experiential magnet that routinely draws 200 to 300 members and their guests to the facility on weekends and holidays – – and more during a series of summer concerts at an amphitheater adjacent to the Barn, featuring an eclectic range of performers including Asleep at the Wheel and Carlene Carter.  In the middle of the main floor of the three-level structure is a huge rock fireplace that blazes in winter.  To its right is a soda fountain/bar, with tables and booths straight out of a casual diner.  Outside is a large swimming pool. 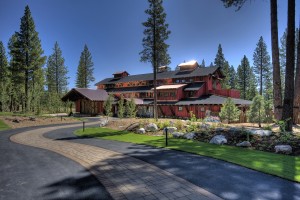 Also on the Barn’s main floor is a sweet indoor basketball gymnasium, with a hardwood floor and glass backboards at each end.  Meanwhile, down on the lower level is a two-lane bowling alley that is generally in continuous use on weekends and in the summer.  Upstairs is an intimate movie theater that screens current release feature films, as well as a spacious art loft that’s fully equipped with oils, water colors, crayons and the tools and media for any project imaginable.  The loft is also home base for the Martis Camp Folk School.

“The Folk classes have been extremely popular from the time they started last summer,” explains Camp Director Hilary Scott.  “There are classes on drawing, painting, quilting, wood carving, yoga and fly fishing among others.”  In the winter the Folk School continues with classes in ceramic arts, jewelry making and more, along with weekly events that include ski races, movie premiers, karaoke competitions and even a moonlight snow tour.  “The feeling that one gets from these activities,” adds Scott, “kind of reminds you of what classic resorts in upper Wisconsin or Minnesota would have been like in the 1920s.”

While real estate in the Truckee and Tahoe-Donner area is clearly suffering, the Martis Camp project is humming at a remarkable pace.  More than 250 home sites, averaging 1.75 acres or more, have already been sold.  Several dozen houses have already been built.  And at least two-dozen more are in various phases of construction.

with curving copper covered roofs and angled walls of glass.  A typical size for homes ranges from 6,000 to 8,000 square feet.  Work is also proceeding feverishly on the 50,000 square-foot Camp Lodge, a combination clubhouse, locker room, fine dining room, spa and exercise facility that sits on a scenic rock outcropping overlooking the 18th green.  It’s scheduled to open in the summer of 2011.  If the rest of the U.S. is floundering in the economic doldrums of the Great Recession, Martis Camp is the exception, sailing at a brisk clip. 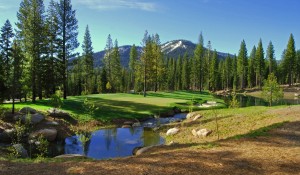 “This place has literally saved the Truckee construction industry,” observes one lifetime resident.  And it’s clearly being populated by what investment advisors call Very High Net-Worth Individuals.   Indeed, these are all second homes, upgrades to existing second homes located elsewhere around Lake Tahoe.  In addition, probably all of members are part of a large, multi-generational family.  A recluse, however wealthy, would fit with the Martis Zeitgeist.

“This is pretty much what our founders had in mind when they purchased this piece of property in 1999,” explains Johnson.  “The intent is to provide the highest standards of excellent service, and in a place with a wide variety of activities to engage several generations of a family and their guests.”  From the Family Barn to the temporary pro shop, the service is on par with what you’d find at the Lanesborough Hotel in London, or the Four Seasons in Chiang Mai, Thailand.  And the activities have a powerful purpose.

Ideas for All of Us Low Net Worth Individuals

Johnson and other members of Martis Camp management often talk about the concept of “quality time remaining,” which ought to resonate even in a poor economy, perhaps more so.  How often do you hear about someone going out and buying a Porsche right after being diagnosed with cancer?   Well, without recklessly spending discretionary money beyond one’s means, why don’t more folks buy that Porsche before the cancer diagnosis, so the drive is joyful rather than bittersweet?

While relatively few of us will ever live the luxurious Martis Camp lifestyle, Americans clearly derive vicarious pleasure from reading about and seeing film of expensive toys and exotic places.  And in truth, even Low Net-Worth Individuals can find some takeaway value in the Martis Camp model, the idea of getting the most out of one’s quality time remaining, and with the extended family.

We unfortunately live in an era when work often bleeds into evenings and weekends, thanks to ubiquitous messages on i-Phones, Blackberries and other PDA’s.   Many of us live far from our parents and adult children.  Kids today have less and less unstructured family time, often because of commitments to traveling youth sports teams, arguably one of the most abominable developments of the past 20 years.  Computer games have their place in the entertainment spectrum, but can isolate young participants.  I see all too many families that either don’t spend much time together, or who have a one-dimensional focus when they do.

DMB Associates and the Highland Management Group has made it very convenient for Martis Camp members to bring together several generations of a family and their guests and experience group activities in a beautiful private setting.  And yet, the world is full of free public fishing holes, where grandfathers can take grandkids.  A lot of city recreation departments hold dirt-cheap craft classes.  There are astounding public golf courses – – think Coyote Moon and Gray’s Crossing, just minutes away from Martis Camp and which offer pretty good rates at various times, especially to members of the Northern California Golf Association.  Anyone can ski Northstar, Squaw Valley or Heavenly for the cost of a lift ticket.  And getting the family together for a night of bowling has never carried the slightest whiff of exclusivity.

Real luxury then, is about how you use your quality time remaining – – not necessarily the location or the activity’s cost.