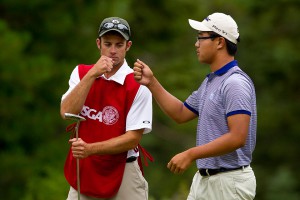 Caddie Eric Hedspeth and Jim Liu fist-bump in the first round of match play, only to hit bigger bumps in round two.

July 25, 2013, Truckee, CA: Just one day after squeezing by the 64th seed in 19 holes, former U.S. Junior Amateur champion and stroke-play medalist Jim Liu was ousted in the second round of match play.  John Augenstein, 15, of Owensboro, Ky., defeated the 17-year old Liu in 20 holes on Thursday morning.  The third round of 16  in the 66th U.S. Junior Amateur Championship, at the 7,740-yard, par-72 Martis Camp Club, was then delayed by a thunderstorm.

The 2010 U.S. Junior Amateur champion and the runner-up last year found himself in a see-saw contest.  After squaring  the match on the par-4 17th with a 20-foot birdie putt, Liu and Augenstein halved the next two holes.  But Liu found trouble on the 465-yard, par-4 second. After  Augenstein  pared the hole and Liu missed a 7-footer for par, the upset of the day was over.

Playing in his first USGA championship, Augestein noted the “many momentum changes.  “You just have to keep your head up and keep plugging away. I hit a lot of good iron shots and hit a lot of greens, which gave me a lot of chances.”Cameron Young, the second seed, and Scottie Scheffler, the third seed, also advanced to the championship’s third round.