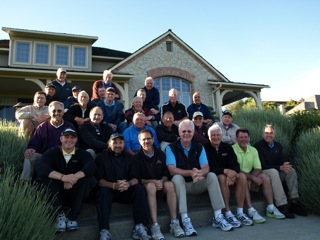 The Guys From Pacific Lutheran

Next Saturday about three-dozen collegiate athletes will gather at the Apple Tree Golf Course in Yakima, Washington, for a round of golf and a subsequent barbecue.  It’s the sixth or seventh annual version of what’s known as “Bruce & Mike’s Wild Adventure,” for alumni who played basketball and other sports for Pacific Lutheran University during the early 1970s.  Since nearly all of the participants are over 60 and need to drive back over the Cascades following dinner, the adventure is invariably more mild than wild.

But then, that’s what you’d expect of guys who attended a small college, got little or nothing in the way of scholarships, and spent two or three hours a day from September through February working on their game with no illusions about agents or the NBA.  Groupies?  Well, a few of us were lucky enough to have a blonde-haired girlfriend of Scandinavian descent, although blonde-haired Scandinavian females accounted for about half the student body.  At PLU, diversity meant Norwegians eating dinner at the same table as Swedes.

While it’s true that people change over time, the character of the guys from Pacific Lutheran is pretty much the same now as then.  While one teammate is the Minister of Environment in Saskatchewan, there are no famous career superstars in the group – – just very successful high school teachers and basketball coaches, an orthodontist, a university professor and author, and solid business types with lifestyles a click above average.

A few of the guys who live near Tacoma have long kept in touch, but after nearly 40 years it was golf that brought much of the team back together.  Cousins Mike and Bruce Willis started the PLU tradition with one or two foursomes, and the way-back machine grew with each passing year.  (Mike doesn’t count well, thus the discrepancy on whether this is the sixth or seventh Wild Adventure.)  Last year we had 33 Lutes show up, with more expected this time around. Sporting gray hair – – for those that still have hair – – most of the former athletes look like former athletes, in pretty good shape except for being older.  None play golf that well, but that’s not the point of the round or the barbecue at Bruce’s house, where stories of ancient basketball exploits are remarkably truthful and never exaggerated.

For a small school Pacific Lutheran had a formidable sized squad, with two players standing 6-9 and a third at 6-8.  But the team was also much like the character of the individuals. No one played above the rim in those times or made flashy passes, but we ran a disciplined offense, shot a good percentage and always won more than half of our games – – again a click above average.  Garrison Keillor would likely call us the team from Lake Woebegon.  And he wouldn’t be the least surprised to hear the PLU student body’s traditional chant: Lutefisk, lutefisk, lefsa, lefsa, we’re the mighty Lutherans, ya sure you betcha.