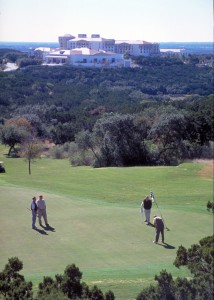 The Westin La Cantera has two courses, The Resort and The Palmer.

Hell came to Texas in 2011 and despite Governor Rick Perry’s futile pray-for-rain intervention, much of the Lone Star State withered during its driest 12-month period since 1895, when Texas first began keeping rainfall records.  As fires raged across the state, Austin was cooked by more than 90 days of 100-degree temperatures. Reservoirs went dry, cows died and San Antonio’s golf courses . . . well, in late September they actually didn’t look all that worse for the wear.

On a trip arranged by the San Antonio Convention & Visitors Bureau, a small group of golf and travel journalists got a first-hand look at the area’s courses.  Base camp was the Westin La Cantera Resort, and the primary focus was the Las Americas golf tournament, which raises money for the Lorena Ochoa Foundation. While serving as the tournament’s host, the now-retired LPGA star put on a short clinic, and her very evident pregnancy didn’t detract the least from her oily swing.

Signs of the drought were equally visible on the fairways of La Cantera’s Resort Course, where irrigation had been cut back by nearly a third during the summer.   Some of the less important areas of fairways showed almost as much dirt as brown grass.  But the prime landing zones were at least a pale green with sufficient turf, while tees and greens were in resort condition.

Other courses in the area have, however, been harder hit.  With San Antonio under a stage 2 water restrictions for most of the summer, courses that relied on the municipal supply had to curtail irrigation by 30 percent.  Although the region teetered on moving to stage 3 restrictions – – which would have meant a 40 percent cut, mid-September thunderstorms brought some relief to an area that had only five inches of rain this year – – far behind the pace to reach its 33-inch average.

To squeeze through the heat, one club watered its fairways only once every two weeks, just to have enough to keep the turf on its tees and greens healthy.  Courses that could use treated and recycled effluent fared relatively well.  Others were reluctant to draw on the area’s declining ground water supply, and one was even forced to truck in water for tees and greens.

Down in The Quarry

We found the venerable Quarry course, just five minutes from downtown San Antonio, in even better condition than La Cantera.  It is also a course that exemplifies the intrigue that is San Antonio and Texas Hill 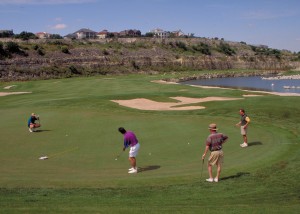 As a result of the Great Texas Drought, water level in The Quarry's lake are currently not nearly as high as in this photo.

Country golf.  Opened in 1993, the front nine of the 6,740 yard, par 71 Keith Foster design has a links style format that follows rolling hills and features native grasses, and rambles around open space next to a freeway and office parks.   The back nine then plunges into the base of a 100-year old quarry pit, which closed in 1983 after roughly 100 years of operation.  Famous for supplying the cement for the State Capitol of Texas, the 88-acre floor is partly surrounded by 100-foot limestone rock walls, with a lake in the middle.

There are forced carries over that lake, over rock walls and to some relatively narrow fairways.  On the ledge above are some of San Antonio’s toniest homes, part of the Alamo Heights neighborhood.  But it’s the jagged stone that makes this course – – and others in the jagged topography of the Hill Country – – that make golf in this part of Texas so visually interesting.

The rates at The Quarry are very reasonable, ranging from $60 to about $110.  The starter sends off groups ten minutes apart, which makes for a fast and yet unhurried pace of play.  Its restaurant has one of the larger menus we’ve ever seen at a golf course.  And the clubhouse hosts weddings and weekend parties that are open to the public.

If the Drought Continues . . .

The recent drought has put Texas in a world of economic hurt, in particular the agricultural sector.  There are forecasters who believe that abnormally low rainfall could continue for several years or longer, a mean piece of climate change.  The future of the Alamo City’s River Walk is arguably in question. 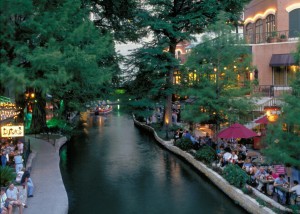 As magnetic to visitors as the Alamo, San Antonio's River Walk is a civic treasure.

Golf courses will endure more issues and adapt should the drought continues.  For example, it’s not just a lack of water, but also the sustained heat that also causes damage.  The USGA’s regional agronomist, Charles “Bud” White, explained that with the 100 degree plus temperatures, a course can lose over a third of an inch of moisture every day, just in evaporation out of the turf.” The combination of drought and heat can also cause layers of clay beneath a course to expand, which can wrench and break irrigation pipes and buckle cart paths.  And if rain does not fall during the next six months, spring will be tough on fairways.

Indeed, during normal summers golf course turf builds up a store of carbohydrates in the root system, to help it make survive winter.  When the grass is already dormant or stressed, such as the courses in Texas, the turf is vulnerable to severe winter weather. As a Golf Course Superintendents Association of America official told one reporter, “Come spring, a lot of superintendents may have to find ways to manage their courses like they’ve never had to before.”