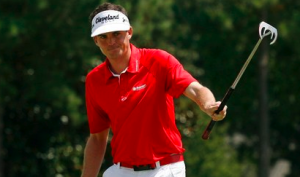 Once the last resort for old men with bad backs and yippy hands, long and belly putters are now showing up in the bags of PGA Tour professionals, in even more bags on the Nationwide Tour, and a certified rage amongst kids wearing Ricky Fowler colors and wide white belts.  Bellies, it seems, are growing as prominent as Maltbie’s gut.

So is an increasingly heated debate on whether or not these “alternative putters” are good for the game, or even legal since the butt of the shaft is “anchored” to one’s chest or stomach.  For example, the recent Sports Illustrated golf equipment issue contained a long feature entitled “The Belly Boom,” which concluded that no matter what critics may say, the weird-looking long putters were in the game to stay.

Meanwhile, the Northern California Golf Association’s latest quarterly magazine includes a point-counterpoint column on whether belly putters ought to be banned. I was asked to write the “no” side of the argument, and of course crafted a professional opinion without ever actually testing a belly on a real green.  But the assignment triggered an interest in the belly, and it’s now clear I should have tried one long ago.

The plain fact is that once on the short grass, I’m cursed.  Now, on putts of 20 to 30 feet, I’ll lag them to kick-in distance maybe 8 out of 10 times.  Alas, when putting for birdie or par from three feet out, well, I‘ll lag those lag those close, too.

Then came this Golf Road Warriors adventure, and from trip sponsor Callaway Golf an Odyssey White Hot Sabertooth Belly Putter, just like the one Keegan Bradley used to win the 2011 PGA Championship, the first major ever captured by a player who was alternative putting.  More significant on the personal level, the Sabertooth is turning into absolute beast, enabling me to drop short Coachella Valley putts this week at the Mountain Course at the La Quinta Resort, the Indian Wells Golf Resort, Silver Rock Golf, Shadow Ridge, the Golf Club at Tierra Lago.

The argument against long putters is that anchoring the butt end of the shaft against one’s sternum or stomach enables you to make a more stable and consistent pendulum stroke, which is ostensibly an unfair advantage against someone crouched over a regular-length stick, gripping the club only with the hands.  Tom Watson, who can get  his panties in a bunch over most anything, railed against “this big broom putter.”  Venerable Golf Writer Dan Jenkins announced that: “I loathe and despise the long putter with every fiber in my body,” which at his age indicates he’d better be eating more fiber.  In 2004 Ernie Els insisted “they should be banned.”  Guess who I saw using an alternative putter at the Frys.com Open last fall?

Now Els is flopping like a beached carp, or maybe worse and like a Republican presidential candidate.  “Although I’ve used it, I’ve used it for, what, six months now, I feel the same as most of the tra­di­tion­al­ists,” Els said at the 2012 North­ern Trust Open in Los Ange­les. “I feel that no club should be anchored to your body.  I don’t know how they’re (the USGA) going to go around it;, maybe use a put­ter as long as you want as long as it’s not anchored to your body any way, even up your arm.  You see a lot of the guys use it in their armpits now.  “Noth­ing should be anchored to your body. I was in such a state that I felt that I needed to change some­thing, which I did.  I went to the belly.  It hasn’t really helped me that much, but it has helped me.  But I’m for it.  Ban it.  It’s fine.”

Thanks a lot, Big Whatever.

The USGA in fact  had a chance to ban these putters some 20 years ago.  If Sam Snead’s croquet-style putting stroke could have been prohibited, the thing about anchoring the butt of the club against the body would have met little or no resistance.  USGA Technical Director Frank Thomas wanted long putters banned as non-conforming, but was overruled. Now?  Well, the big cats are out of the bag.

Putting guru Dave Stockton has been learning to personally stroke the alternative putters just so he can teach their use with his distinct approach to putting.  Short game instructor Dave Pelz has found that players tend to make more short putts with belly putters, but are not quite as accurate on long lags.  I’ve found that one simply needs to spend a little time getting a feel for the stroke on those longer putts, which is soon identical to using a standard length flat stick.

(Caveats: Casual one-handed automatic tap-ins from 12 inches out aren’t as easy with the heavy and long-shafted bellies.  Make sure it’s conceded before flipping an alternative at the ball.  Oh, and since it’s also one of the heaviest clubs in the bag, walkers who pack ought to sure they’re ready for the additional weight.)

Yet another putting guru is PGA Teaching Pro Norm Albergio of Rhode Island, who is also one of the world’s most far-sighted putter gurus.  Albergio contends that most regular length putters have shafts too long and heads that are too light, which makes it too easy to put unwanted side-spin – – perhaps only 30 rpms – – on short putts.  He believes Tiger Woods is making a perfect stroke on those five-footers, but missing on the left edge, because of his equipment.  Albergio also says that the USGA would be wrong to think anchoring a putter to you body gives any kind of advantage.  “It’s the mass and weight of a long putter,” he insists, “that gives them stability.”

The Short and Long of It

How rapidly are long and belly putters penetrating the golf market?  “In 2011, interest in belly and long putters has brought tremendous excitement to not just the putter category, but the golf industry as a whole,” says Chris Koske, Global Director of Odyssey Golf. “Odyssey has seen a 400 percent increase in sales of our mid and long putter offerings over 2010, and we are not expecting it to slow down any time soon.”

Titleist’s Scotty Cameron says he used to sell between 500 and 1,000 alternative putters a year, but thanks to Adam Scott’s second place finish in last year’s Masters, Bradley’s PGA win and other professional successes, Cameron expects to sell up to 20,000 of them in 2002. 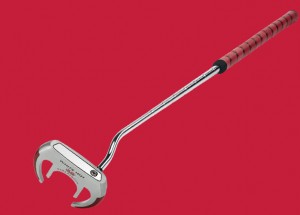 Like a baseball bat with perfect weight and balance, putter choices are highly individual, which is why it is good golfers today have so many choices.  I’ve tried several belly models now, but find I have excellent long-range touch with the White Hot XG Sabertooth, while getting much closer to dialing in the accuracy on those long-perplexing short challengers.

With one of the more radical head shapes, the club’s “Dual Fang” design gives it the name of the extinct cat.  But those big teeth position weight out and behind the sweet spot, helping keep the putter on line.  Here’s more of what Odyssey says about the Sabertooth:  Aiming Channels inside the fangs make lining up putts easier. The multi-layer White Ice® Insert allows weight to be shifted to the perimeter of the head for stability, while also delivering enhanced feel, sound, responsiveness and resiliency, adding up to consistent distance control and ultimate feel on the green.

And that’s what you need to roll the long putts close, and make the short ones that produce the most pleasing and rewarding sound in golf – – a ball hitting the bottom of the cup.