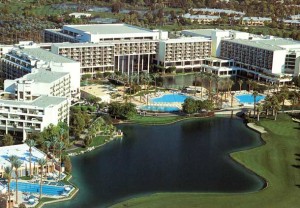 The massive Marriott, with golf, pools, restaurants and nightlife.

The first night of the Golf Road Warrior incursion into the Coachella Valley brought me back together with a couple of old friends – – the massive and sublime JW Marriott Desert Springs Resort & Spa in Palm Desert, and the nearby Tommy Bahama’s Restaurant and Bar on the lively and fashionable El Paseo.  Good food and a soft bed with crisp linen and plenty of pillows makes for a soft landing, excellent preparation for the next day’s Inquisition at the formidable Classic Club.

I first stayed at this Marriott over the Thanksgiving holiday in 1987, not long after it opened.  I went back a couple times in the intervening years, and have always been impressed by the energy of a physically attractive clientele.  A lot of Southern California’s beautiful people clearly choose to stay and play at the Marriott.

Days are often spent at the complex of swimming pools flanked by several 7-story wings of the hotel, a lively scene where folks are served food from an outdoor restaurant and plenty of adult beverages. A nightclub that was hopping 25 years ago, Costas, is still in business.  There is also 36 holes of golf on resort property, classic Ted Robinson designs that have been maintained and refurbished, one of which is overseen by Ted Robinson Jr., who is sharpening one of the courses so it’s more like his father’s original design.

What’s also impressive is that the hotel itself feels new, another testament to a fairly recent remodel.  Marriott has kept this property first class.  You don’t get bath towels in the room, but bath sheets.

I last ate at Tommy Bahama’s about three or four years ago, which was also recently remodeled.  It’s still on the second floor of a building above a Tommy Bahama retail outlet full of clothing, on a street with more than a dozen excellent restaurants.  Bahama’s menu is the food analog of the company’s signature clothing style, the casual and colorful elegance of eclectic style Caribbean style.  Kessler ordered a filet mignon.  Wallach had lemongrass encrusted Ahi, as did Strawn.  I liked the looks of the crab-stuffed shrimp, but also a Thai dish that had sauteed sea scallops.  The waitress cheerfully agreed to make me a plate with both, which was enhanced by a helping of chive-covered mashed potatoes.  I most appreciate such flexibility.

It was a Tuesday night and the place was packed – – in the bar, the indoor portion of the restaurant and on the outdoor deck where we had a table.  I know it’s the high season.  I also know that there are still rattles from the recession when business here slows down, and that confidence is only slowly coming back.  But if confidence is still not at 2005 levels, the people are clearly back in Palm Desert.