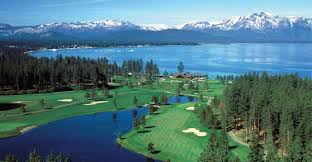 On the 2014 Reno-Tahoe media tour, an ever morphing cast of nearly three dozen journalists played a variety of golf courses in Reno, around Lake Tahoe and in Plumas County, about a hour north of Truckee.  Groups of us ate at different restaurants and were graciously housed in a variety of accommodations.  With so many travel, dining and recreational options – – including a couple I’ve found on my own while living part-time on Tahoe’s West Shore – – not all can be covered at length.

Following, however are seven takes on the High Sierra’s best:

Edgewood Tahoe: Nestled along the south shore of Lake Tahoe, beneath the Heavenly Valley Ski Resort and across the water from the jagged and spectacular Desolation Wilderness is Edgewood Tahoe Golf Course.  Designed by George Fazio, opened in 1968 and more recently renovated by Tom Fazio, it is one of the few High Sierra course to host a major golf events, including the 55th U.S. Public Links Championship in 1980, and the 1985 U.S. Senior Open Championship, where Miller Barber was the only player in the field to break par; his three-under total gave Barber his second consecutive Senior Open.

With four sets of tees ranging from 5567 yards to 7,555, Edgewood Tahoe runs up and down the slopes above the lake.  The famous 17th hole, a short par three, is in part guarded on the right by Lake Tahoe.  The same is true of the page 5 18th, where the green is flanked on the left by a pond and on the right by the lake.

Those two holes are recognizable in part because Edgewood has hosted the American Century Celebrity Golf Championship for 24 years, with the 25th being played this July 15 to the 20th.  The only celebrity tournament that’s routinely television – – by NBC – – the even features players from the sporting and entertainment worlds, including John Elway, Charles Barkley, Jack Wagner, Ray Romano, Don Cheadle and Stephen Curry.  Weekday resort rates range from $140 on weekdays to $240 on primate summer weekends.

Lakeside Beach House BBQ: After a round at Edgewood, sunset is the perfect time for a visit to the Lakeside Beach House BBQ, just minutes away on the sandy shore of South Lake Tahoe.  Newly re-opened, this is an outdoor venue that serves burgers, sliders, beer, wine and bacon-wrapped water chestnuts.  The only establishment offering grilled American food and beverages right on the beach, it’s a distinct and refreshing change from indoor buffets. 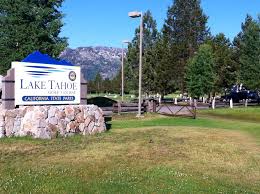 The Lake Tahoe Golf Course is run by the California State Parks system.

Lake Tahoe Golf Course: About 15 minutes southwest of Edgewood, in a natural mountain meadow valley, is Lake Tahoe Golf Course, one of the best public facilities in the region and golf values in the Sierra.  Designed by William Bell, the largely flat and mostly wide open track runs over and next to the Upper Truckee River, which actually tempts one to stop the round and cast a fly line.  With large and receptive greens, this is a course on which to shoot a relatively good score that builds confidence, which is only one reason for its popularity.  The other is green fees, which from Monday through Thursday tops out at $65, and on weekends $85.

Lake Tahoe Resort Hotel: Casinos are great, especially if you’re into gambling and don’t mind surroundings that stimulate the senses.  But if peaceful rest is needed after a long day of golf, skiing or stand-up paddle boarding, it’s tough to beat the Lake Tahoe Resort Hotel.  On the south side of the hotel are The Shops at Heavenly Village, with numerous retail stores, eateries and an 8-Plex cinema; to the north, separated by a narrow alley, is Harrah’s Lake Tahoe, with Harvey’s Lake Tahoe right across the street.  The alley is also the state line, putting the Lake Tahoe Resort Hotel in California, which means no smoke or dinging slot machines, which are part and parcel of Nevada nightlife.  Ah.

Every reservation here includes a two-room suite, a free breakfast buffet and coupons for a nightly happy hour, the latter of which is fortification for a walk across the alley to the wild side. 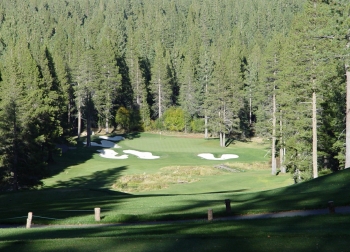 Cloistered by surrounding trees, this Tahoe Donner hole is a most-inviting tee shot.

Tahoe Donner Golf Course: Moving up to the North side of the lake, past Truckee and up the hill on the other side of Interstate 80 is Tahoe Donner, perhaps the original High Sierra golf course.  Located on 200 acres, with fairways flanked by towering pines and bisected by meandering creeks, Tahoe Donner boasts the “Best Greens in the Tahoe Region.”  It’s also one of the better bargains in the neighborhood; local residents and Northern California Golf Association members can play for $65 to $75 until June 23, with the public rate going for $95.  Otherwise, regular rates are $129 for prime time. 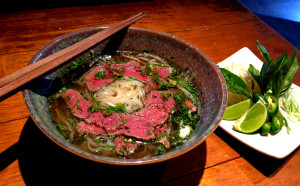 Drunken Monkey Sushi:  Right next to the well-known roundabout on Brockway Road about halfway between Truckee and the entrance to Martis Camp, Lahontan and Schaffer’s Mill is the Drunken Money, a lively place that serves Asian style noodles, sashimi, sushi, sake and beer.  Chef Osamu Okamoto has more the two decades of experience in Asian and French cuisines, and the styles show up in the large and eclectic menu.  Along with its sushi and carefully crafted cold sake and tempura, the restaurant is noted for its tapas, which included garlic seranno prawns that are stir-friend with rock salt, seranno chili and mixed herbs, and machiko chicken, crispy ginger-marinated pieces with chili-lemongrass salt.  The spicy sea scallops, or karashi hotate, should be automatically ordered.

Morgan’s Lobster Shack & Fish Market: Not on the tour but perhaps my local Truckee favorite is Morgan’s Lobster Shack & Fish Market, opened last years by a young couple originally from New England, Heather and Shawn Whitney.  (Heather comes from a family of lobstermen in Maine, and both grew up on friend clams, haddock and swordfish.) With rave reviews for the fresh lobster and premium seafood flown almost daily into Tahoe Truckee Airport, the Shack quickly was became a local treasure.  When it burned down five weeks after opening, Truckee residents had an even strong rooting interest in seeing the Whitney’s re-open. 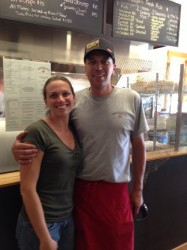 Heather and Shawn Whitney in their Morgan’s Lobster Shack.

They did so early in 2014 and the fish and lobster rolls are as good as ever, especially the “Full Monty,” which comes with a drawn side of butter. Also exceptional is the Lobster Grilled Cheese, which comes with Truckee Sourdough bread, fries and coleslaw.  Located at 10087 West River Street, parallel to old Truckee’s main drag, Donner Pass Road, but on the other side of the railroad track, Morgan’s is an intimate hole in the wall.  Be sure to place your orders at the counter before sitting down.