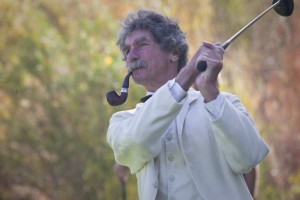 In a day with more temporal warps than a Star Trek episode, 20 passengers cram into a small bus at dawn for the start of 18 holes of golf played at nine public golf courses in the Carson Valley, below the eastern flanks of the Sierra Nevada just south of Reno. Founded during the epochal mists of the Clinton Administration, this annual trek for scribes and broadcasters has attained a near mythic reputation. It’s a karmic kick that is absolutely essential to keeping the Divine Nine Media Tour rolling.

After all, while slow golf is more hated than a Miley Cyrus twerk, we’ve willingly signed on for a 12-hour round that would not end until dark.

Timelines were also blurred by the addition of Mark Twain Impersonator and Lecturer McAvoy Layne, a mustachioed spitting image dressed in that iconic white suit, white vest and black bowtie. Twain may not have been the first to call golf “a good walk spoiled,” but he once played the game with President Woodrow Wilson. More important, Layne-Twain is a silver mine of local historic knowledge, apropos since the young Samuel Clemens lived here in the early 1860s and earned his bones as a writer at the legendary Territorial Enterprise, published a few miles up the road in Virginia City.

The Divine Nine are within a 25-mile radius. While a couple are relatively well known, most suffer in comparison to more glamorous tracks near Lake Tahoe and Truckee, which are also much more expensive.  Thus, the Carson City Convention & Visitors Bureau and the Carson Valley Visitor’s Authority pulled together a cooperative to market the reasonably priced golf, good food, lodging and gaming in an area that still epitomizes the Old West.

(Indeed, the group has put together a “Ticket to Paradise” package, a one-year pass to play at each of the nine courses for just $295.  More information is at www.DivineNine.com)

Bill Henderson, the longtime director of sales at the Carson Valley Inn, is reputedly the creator of the Media Tour.  He’s been aided from the beginning by public relations master Phil Weidinger, who promotes “the serious business of fun” out of his office in Stateline, and from the front of this little party bus.

Ninety-Nine Bottles of Beer on the Wall

“Dinger” also enforces Tour rules, which means no warm ups, practice swings and plumb-bobbing putts. He gives an order to pick after 8 strokes.  Speed on the course is paramount; as he continually reminds folks, “We’re burning daylight.” He also manages a cooler sitting on two seats on the front row, which is named Chad Hartley after a Reno reporter who also took up a lot of space and was always full of beer. 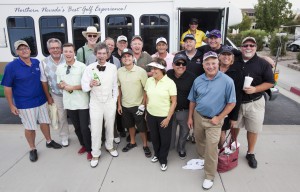 During a brief break during the Divine Nine Tour, the raffish group stops for a photo op.

Henderson keeps score for each player and tracks eagles, birdies, pars, bogeys, doubles and the malignant “others.” He also documents the number of lost golf balls and beers consumed, which clearly have a relationship.

Covering golf clearly does not make one a skilled player.  On what was a nearly 6,600-yard course with a par of 75, a few of us broke 90 and nearly half the group shot over 100. There were ten birdies and 73 double bogeys.  Only 56 balls were lost, despite the consumption of 113 beers. Twain shot a cool 144.

Major hosts included the Carson Station Hotel & Casino, which provided lodging and a fine dinner the night before.  Lunch came during a quick stop at Red’s Old 395 Grill, with choices of delicious pulled pork or brisket sandwiches.  Dinner and drinks for those still standing were served at the Silver Oak Golf & Event Center, a great restaurant attached to the last of the nine golf courses.

A Google of Divine Nine will pop several features on the Tour, some including detailed accounts of each hole played, including yardage, terrain and lost balls. Following instead, here are links to each course and a couple observations about a pair of remarkable characters.

You Don’t Have Enough Ammunition

With machine like precision, the day kicked off at the Genoa Lakes “Lakes Course,” where ten golf carts were already waiting, a pattern followed the entire day. We played simultaneously, ten headed down the fairway at a time, chaos that actually worked.

The next stops included the nearby Genoa Lakes Resort Course, followed by Carson Valley, Sunridge, Empire Ranch and Dayton Valley.  Some of the courses have challenging water features, but many are open, wide and often windy in the afternoon. Five of the nine have green fees that are $45 or less, which draws tourists on the short drive from Stateline and Truckee.

Before finishing the round at Silver Oak, we played on Eagle Valley East and Eagle Valley West, a 36-hole municipal complex, where Director of Golf Jim Kepler has been an excellent friend of the Media Tour.  He also offers exceptional service to his clients and the community. High school teams practice and compete here. Most remarkable is that any day or week in the early morning, golfers 80 or older play for free!

Also rather remarkable is spending the day with Mark Twain. For more than 20 years McAvoy Layne has earned his living giving lectures, performances at the Mark Twain Cultural Center near his home in Incline Village, and appearances worldwide.  He also portrayed the ghost of Twain in the humorist’s biography broadcast on the A&E Network.

Layne hews closely to character, knows all of Twain’s stories and builds still other jokes around being 177, which would today be the writer’s age. He concedes that his wife at times has difficulty recognizing if he’s being Twain or Layne.  But modern world occasionally creeps in the conversation.

For example as we drove past Nevada’s oldest watering hole, the Genoa Bar and Saloon that opened in 1853, Twain stood to tell a joke.  “The last time I was in that saloon a fellow walked in with an AK 47 and demanded, ‘Who’s been sleeping with my wife?’  And a voice came from the back of the room, ‘You don’t have enough ammunition.’”

Well, time warps simply tend to happen on the Media Tour, since there weren’t AK 47’s in the 1860s. When Twain first told this joke he undoubtedly said, “The last time I was in that saloon a fellow walked in with a six shooter and demanded . . .” And of course, the punch line would have been just as hilarious.