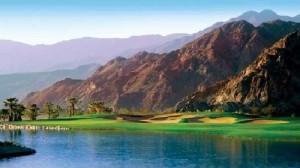 Getting paired up with strangers on the golf course isn’t quite as risky as a blind date, although on occasion I’ve considered chewing my leg off to get out of the trap of a nightmarish cart partner. Most of the time, however, you end up with pleasant people. But then there’s the rare match-up that’s a downright delight, where personalities mesh, long putts roll in, laughs are shared and most important, you find coincidental connections that make for a sublime day of golf.

Me and Wallach had that experience on Sunday morning at the SilverRock Resort in La Quinta, the start to our final day on this Golf Road Warriors excursion to Greater Palm Springs.  Set hard against the Santa Rosa and Coral Mountains, this is a challenging and yet otherwise mellow course that was part of the Bob Hope Classic from 2008 until 2011. Better still, we were met at the driving range by Dede Cusimano, who is a LPGA Teaching Professional at the nearby Rancho Las Quinta Country Club during the winter months, and during summers at Colorado’s Roaring Fork Club in town of Basalt. Her affable and encouraging demeanor makes it obvious why Golf for Women magazine named her on their their Top 50 Golf Instructors in the U.S., for it’s personality that makes the mechanics of instruction stick.  Oh yes, and Cusimano is a stick, more on which later.

Our other partner was a fellow with a Scottish accent by the name of Graeme Baxter.  Hmmmm.  Baxter.  From where do I know that name?

Geeze, I know the name because it’s signed on a print of a painting of the 17th hole of the Old Course – – number 149 out of 850 – – purchased in 1996 as a birthday present from my wife, while we passed through St. Andrews during a business trip to the United Kingdom.  It’s professionally framed and hanging in a room I go into at least a half-dozen or more times a day. I put it in a prominent place because Baxter is a world-reknown artist, I played the Old Course during that trip, and handled the Road Hole without coughing up fur balls.

However, for 15 years I’d imagined him as a grizzled, bearded and intemperate old coot. But here’s this clean-shaven, youngish and outgoing fellow playing to a 7 handicap, cracking jokes and smiling. Can I see some ID?

Owned by the City of La Quinta and Managed by Landmark Golf Management, SilverRock Resort’s is an Arnold Palmer Classic Course.  At 7,578 yards from the tips – – which by the way we did not play – – it sprawls over 200 acres with massive native bunkers and stunning water features that force a player to think their way around.  Situated on a rocky outcropping, the clubhouse is actually a renovation of  the former working-ranch hacienda, built by Mr. and Mrs. Howard Ahmanson, who were associated with Home Savings & Loan renown. While La Quinta was long considered an epicenter of Southern California golf, this course, built in 2005, was the first to be owned by the city.

(In the Coachella Valley several high-end courses are owned by municipal governments, including La Quinta’s SilverRock and the two courses at Desert Willow, which are owned by Palm Desert. These properties offer very attractive rates to residents, and thus redefine what a quality muni can be all about.)

La Quinta still has ambitions for undeveloped adjacent land. Its Redevelopment Agency’s Master Plan for SilverRock Resort includes private development of a luxurious boutique hotel within the existing golf course property.  The first hotel is intended to be small, but with spa and fitness facilities, pools, restaurant and lounge, and conference space. It would then be joined by a “feature hotel,” a 4-star destination to the east of the Silver Rock links.  Casitas units would be located on parcels with golf, lake, and mountain views.  A retail village is also planned, for shops, restaurants and even residential space.

Now, this would clearly change the gestalt of SilverRock for better or worse.  The city would benefit from the revenue. But at the moment the course is joyously undeveloped, without a house or business within sniper range. Although it’s doubtful the economics of development will shift anytime soon,  now is a good time to savor the quiet and open vibe of SilverRock. 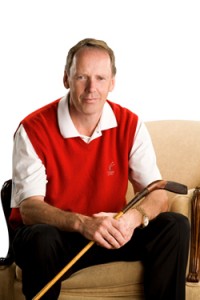 Raised in the Southern California city of Torrance, Cusimano graduated from Boise State University and played on the LPGA Tour from 1986 to 1989. The following year Ely Callaway personally asked her to be his LPGA tour representative, and she spent nearly a decade fitting other professionals with Callaway clubs. But she continued to play in LPGA Teaching & Club Professional tournaments, winning that organization’s National Championship in 2003, and its senior championship in 2009 and 2010.  With a swing that appears effortless, she hits drives and approach shots with a beautiful draw.  And in an e-mail exchange a couple days after this round, Baxter described her swing as having a rhythm that “was much like a paint brush loaded with the finest artist’s oil color gliding smoothly over a well primed canvas.”

He also allowed that he was sticking to painting and not writing.

The official artist to major golf tournaments that include The Ryder Cup, The Open Championship, The Presidents’ Cup,  The Kraft Nabisco Championship and the PGA and European Tour, Baxter’s original oils are hanging in the clubhouses at St Andrews, Augusta National, Pebble Beach, Dubai and Mission Hills in China.  An international celebrity himself, Baxter creates originals for well-known golfers and tournament winners.  But it’s his low-volume lithographs that brings relatively affordable fine art to golfers who love the courses that he paints.  During his career he’s created over 1,300 different images.  And since he never suffers the artistic version of writer’s block, the hard-working painter is going to create many more when not taking time to enjoy the sport.

Me and Wallach are awfully pleased that he and Dede took the time to join us at SilverRock.  It was by far the most pleasant round of the seven we played during the week, tension-free with no cares about scoring – – which is probably the reason my 87 was the best one I personally posted.

So, when you can show up at a golf course and walk away with two new lifetime pals, the game just doesn’t get any better.