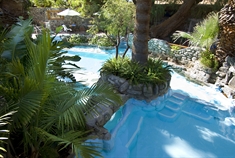 On the opposite side of Interstate 10 from Old Palm Springs is the two of Desert Hot Springs, home of the Two Bunch Palms Resort and Spa. An adults-only sanctuary that allows no guests under the age of 18, the facility has guest rooms and a variety of exotic spa treatments, from facials to Asian massages, aroma therapy and more.  There are several different soaking pools, most with mineral water. Signs everywhere encourage guests to speak softly, as quiet is the ethic here.

Indeed, a Two Bunch Palms signature is the ubiquitous white robe, which is worn to the spa and even to dinner at the resort’s restaurant.   They like to say it enhances “the freedom of simply being.”

My massage therapist, Kim, discovered that I’d exercised the freedom of doing nothing for my muscles and tendons for far too long.  A few years ago a sore back led me to get monthly massages, which actually put 20 extra yards into my drives.  That’s since been lost.   But while she doesn’t specialize in sports medicine, Kim and several others at Two Bunches work with a large number of golfers, tennis players and other athletes. She quickly found the spot where my right shoulder has some damage from serving tennis balls.  She noticed immediately that my left knee was loose, before I mentioned not having an ACL.  Kim has been with Two Bunch for 18 years and is very good at what she does. 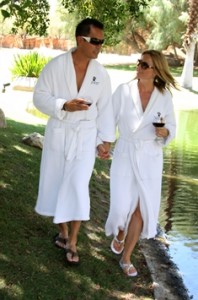 The treatments here are not inexpensive.  But for a high quality retreat that’s equally spiritual and physical, Two Bunch Palms is worth the investment in simply being.