A friend recently made the amusing observation that he thought “links” golf courses were defined by holes strung one after the next like sausages.  While I’m all for sausages, the true definition of a links is that it occupies a seaside location that was once under water.  In most cases, these sandy stretches now linking salt water and inland topography consist of dunes grown over with such flora as gorse and fescue grass.  Links golf courses tend to feature deep bunkers (originally grazed by sheep); firm, fast, undulating turf; and stiff breezes.  Most of the best links courses are located along the perimeter of the British Isles.  Following are a collection that you’ll want to eat up like, well, sausages.

West across the Severn Estuary from Bristol, England lies Royal Porthcawl, the most famous golf course in Wales.  Unlike on many links, holes here play in all directions, so on windy days club selection is as much a guess as a science.  Also unusual are several heathland holes routing across a high plateau above the Bristol Channel.  Twelve overnight rooms are available in the clubhouse.  Royalporthcawl.com.

Repeat visitors to Edinburgh and St. Andrews, Scotland know that terrific golf also lies outside the famous town.  At Elie, the starter ensures that the blind first fairway is clear by gazing through a periscope from an old submarine.  James Braid learned to golf here, where the course sits in the middle of town.  On the seaside 11th tee, seals may bark in your backswing: Take it as a compliment.  Valuegolf.co.uk.

A few miles beyond Elie from Edinburgh awaits Crail Golf Club’s Balcomie Links, designed by Old Tom Morris in 1895.  Balcomie is a pure expanse where golfers have cavorted beside the ocean since 1786.  The stone lifeboat shed behind the 14th green is as picturesque a landmark as you’ll find anywhere—unless you hit it.  Crailgolfingsociety.co.uk.

Ace in the Hole

Two hours east of London, Royal St. Georges was the site of the first-ever televised hole-in-one, by Tony Jacklin, in the 1967 Dunlop Masters.  Equally engaging was watching Tiger Woods four-putt the 12th hole in the 2003 British Open.  Revered golf writer Bernard Darwin wrote of Royal St. Georges, “as nearly my idea of Heaven as is to be attained on any earthly links.”  Thirteen Opens have been played on the course and only three of the winners recorded scores under par.  Royalstgeorges.com. 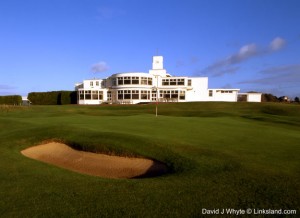 Peugeot Golf Guide describes Royal Birkdale, outside Manchester, as “unforgettable, and like a dinner in a top hotel, this immense pleasure comes at a price.”  Said price might be that of golf balls hit into minefields of pot bunkers and other hazards.  Singing skylarks and willow warblers have witnessed eight British Opens on the 6,290-yard venue first laid out in 1897.  Royalbirkdale.com.

Whether you’re peering from the grand cliff-top hotel at the famous golfside lighthouse, or from the windswept links back to the warm lights of the hotel, the Westin Turnberry Resort, 80 km from Glasgow, is one of the poshest locations for world-class links golf.  In addition to the Open-venue Ailsa course, Turnberry is home to the Kintyre Course and the Colin Montgomerie Links Golf Academy.  Turnberry.co.uk.

North of Belfast lies Royal Portrush, Harry Colt’s masterful 1947 redesign of an 1888 layout.  The course proffers holes with names like “Giant’s Grave,” “Calamity,” and “Purgatory,” which should tell you something.  Several holes play along cliffs above the sea.  Royalportrushgolfclub.com.

Portrait of the Golfer

On the site of one of the earliest golf grounds in Ireland, outside Dublin, Portmarnock presents knee-high rough and huge, well-guarded greens with more contours than a river dancer.  Arnold Palmer had his first links experience here when he won the 1960 Canada Cup with Sam Snead.  The Irish Golf Institute perennially ranks Portmarnock the #1 course in Ireland.  Portmarnockgolfclub.ie.

Turnberry, Ailsa Course. Iconic lighthouse and where your ball may land.