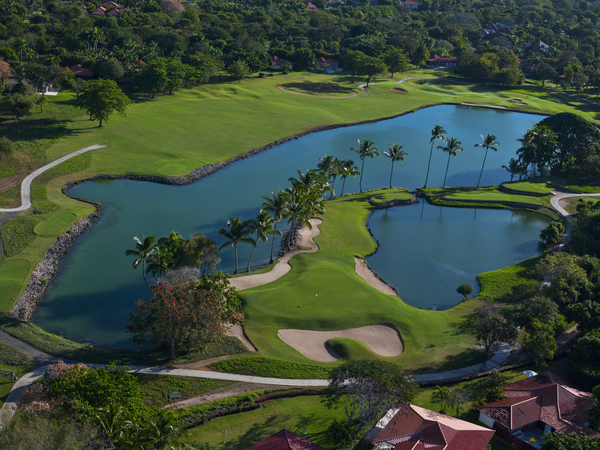 If you believe George Peper and Malcolm Campbell in their recent book True Links, they identify some 246 great layouts worldwide that meet the criteria of a links course: which is essentially that a golf course must have been built on sandy soil on land that was once under water and is still adjacent to the sea.  Which is another way of saying that just because a golf course superintendent grows grassy beards around bunkers and lines fairways with fescue, he hasn’t necessarily created a links Course.

That said, Pete Dye’s Links Course at Casa De Campo is a perfectly fine example of a links-style golf course and also shares many features you’d find on a true links, including waving rough grasses, splashes of pot bunkers, what appears to be a ravetted bunker fronting the par-three fifth hole, wind, and the opportunity to run shots along the ground (although this final characteristic doesn’t come into play on a number of the elevated greens which were designed to repel such shots).  By the way– the greens are of particularly high quality, young and nubile sporting their new paspalum grass, and true as your high school sweetheart.  They were planted less than a year ago and are in immaculate shape and roll beautifully but also welcome approach shots with as much hospitality as the folks at the  Casa De Campo registration desk.

Our group of Golf Road Warriors found it to be the most easy-goingly enjoyable of Casa De Campo’s rota of golf holes.  From the start the flat lies in the fairways were a welcome respite from the difficult hilly funhouse we experienced yesterday on the Dye Fore Course.  (At the same time, we wouldn’t trade all the high drama from yesterday just for flat lies).  Fairways on the Dye Links are also as wide as they are flat, letting players swing away from the tees at playing corridors that are manageable even if you are required to hit over a bunker or water hazard to optimize  you drive and land in the A position on them.  Most of the challenge on the Links course lies around the green complexes, which are mined with bunkers, swales, shelves that repel attack, narrow cupping areas, and more.  They’re also gorgeous to look at, created in a way that just makes you want to play golf.

On the back nine, a series of lakes– though unlinks-like– lend additional character to holes 12-15.  The first of these is a par four with water short and right of the green and bunkers to the left.  A mid-length par three follows, with the green jutting out into the water and daring you to aim at the pin.  As Hemingway might have said, The Lake Also Rises on the left of the next hole and then ducks in front of the putting surface but a mound to the right offers the perfect target and also works to push well-struck shots toward the pin.

If there was a moment of consternation all day it came on fourteen when my ball landed at the top of a small ridge to the right of the green.  A deep swale covered all the ground between me and the putting surface, which was perched atop it and promised to stamp “return to sender” on any shot that didn’t carry the steep slope of the collection area.  The green itself was about twelve paces wide where the pin was located; six feet beyond it lurked water.

I declared the shot patently impossible and our group made several attempts at getting a ball anywhere near the flag in a variety of ways– bump and runs, low liners hit into the side of the hill so they would pop up and land on the green, flop shots, and more.  As soon as we’d proved our conclusion of impossibility, warrior Anita Draycott– somehow under the tutelage of Hal Phillips, who on this particular day would have been equally qualified to captain the space  shuttle as offer anyone golf instruction– executed a perfect flopper that landed a foot into the green and rolled another six feet for a tap-in.  Student and teacher rejoiced at their success.  Go figure.

And we all rejoiced at a lovely, user-friendly day on the Dye Links.