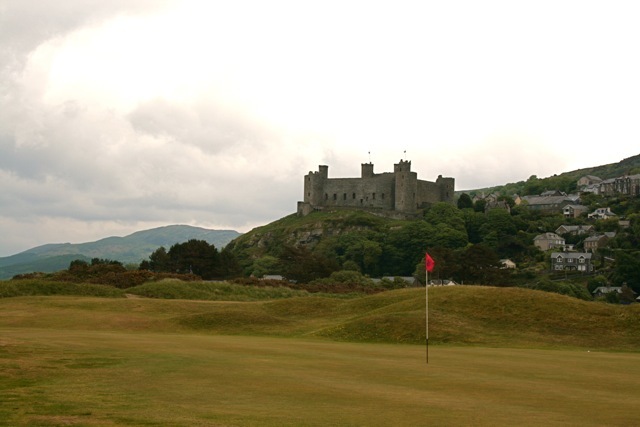 It’s a rainy day in Harlech, along the Welsh coast, and I’m supposed to be teeing off at the venerable Royal St. David’s Golf Club at this very moment. Luckily, it’s quiet–there’s a boys’ championship in a few minutes, but two ladies gave it up and a foursome at 8:20 played six holes, came in soaking wet, and left. The forecast is for a nice afternoon, so golf will wait.

Till then, it’s impossible not to ponder the amazing world we live in. The 20-minute drive this morning through tiny villages and along still smaller, windy roads lined by walls of local slate was eerie as it poured down rain. It’s easy to imagine life here 50, 100, maybe even 1,000 years ago, looking through the windshield wipers onto fields and rocky mountains, sheep grazing and plants bending in the breeze, lakes refilling and smoke coming from stone huts.

In the clubhouse at St. David’s are photographs of play through the years, lanky men in jackets, ties, wide caps, and plus-fours, some in spats or gaiters, attacking the ball. Mustaches and pipes, faces as craggy as the landscape, women in wide skirts. There are 100-year-old letters on the wall, photos of royalty (before he abdicated, Edward used to play here while Wallis Simpson puttered around Portmeirion, the architectural stewpot where I stayed the last two nights), notes from club meetings circa 1896, drivers, mashies, and putters that were used before my grandfathers were born. It is one of the reasons I love golf, the rich and colorful history, the fact that it is much more than just the playing. At places like this, the years compress and the dead are alive.

Overlooking the club and the town is Harlech Castle (above), which is 800 years old, a square block of dark stone mined nearby, an imposing fortress. I saw it yesterday from across the bay: Standing at the highest point of Porthmadog Golf Club, the black form was barely visible on the horizon. Now turn 90 degrees, my host said: Due West was Criccieth Castle, another of Edward I’s “Iron Ring” meant to keep the locals quiet in the late 13th century, neither the first nor last time the Welsh rebelled for recognition if not independence. The history of Wales is in the guidebooks, but it is also in the faces in the photos as well as the tough-as-nails locals I pass in the post office and the newsagents.

While preparing for this trip I got it in my head that Wales is where Ireland was about 30 years ago: Barely on America’s radar as a place to visit, even less so as a place to play golf. The books say Wales fared worse than Ireland and Scotland in achieving rights and freedoms from Britain’s Parliament, perhaps because it is so much closer. Nationalism has long been a cause here, and is still, or maybe again. One hears Welsh spoken everywhere: There are a few Welsh-language radio stations, a Welsh TV network, and it is being taught in the schools. Old battles are still being fought here as they are everywhere else around the world.

A world in which I can sit in my bungalow on club grounds, where I’ll spend the night, logged into their wireless server, waiting for the rain to stop, hoping to play a silly game that’s not as old as the castles but is as interwoven into local culture as the pubs. Golf has taken me around the world, but no trip is richer or more redolent than one to the UK where it all began. And Wales, haunting in today’s rain, childishly giddy in yesterday’s sunshine, is something special, a last frontier waiting to be discovered and struggling not to change.