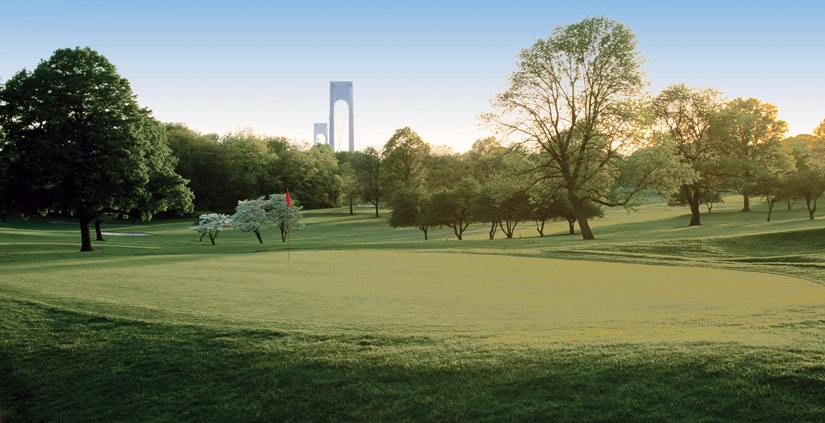 Dyker Beach Golf Course, with the Verrazano Narrows Bridge in the background

Mayor Bloomberg was mad. Well, not real mad, more pretend mad. He was welcoming about 100 of us to the “Mayor’s Cup,” an annual fundraiser for the CityParks Foundation, and he was upset because he wasn’t playing. Something about having to attend the commencement of Brooklyn Law School. So there he was, in suit and tie, talking to a roomful of people in golf shirts and shorts, saying he’d be thinking nasty thoughts about us playing while he was listening to speakers drone on and on and on…

The Mayor’s Cup was held last Friday at Dyker Beach, a New York City public golf course located in Bay Ridge, Brooklyn. Most golfers—even those in the Metropolitan area—don’t realize there are 13 public courses in New York City, in every borough except Manhattan. That number will soon grow to 14 with the greatly anticipated opening of Ferry Point in the Bronx, a Jack Nicklaus design that has seen its share of controversy since first being announced in 1998, when Rudy Giuliani—another golf-mad mayor—ran the city.

Before last week, I’d played two of the city courses, Douglaston and Clearview, both in Queens not far from where my in-laws used to live. I remember needing a hammer to get a tee into the ground at Douglaston (admittedly that was at least 20 years ago); I also remember Clearview being long and lush, sitting in the shadow of the Throgs Neck Bridge.

Back in the ‘80s, the city turned over management of some of its courses to outside vendors. Today, five courses—Dyker Beach, Clearview, LaTourette (Staten Island), South Shore (Staten Island), and Pelham Bay/Split Rock (Bronx)—are run by American Golf, which also sponsors the Mayor’s Cup. Proceeds from the event benefit CityParks Golf, which provides free golf instruction to kids throughout the city. (Callaway Golf is another sponsor of the event, and they also were my host, so extra thanks to them!)

Dyker Beach was a surprise. Not very long—none of the par-fives plays more than 490, and even from the back tees it’s only 6,438 yards—it is a challenging layout with tall, thick trees, tricky greens, and clever movement. The terrain wasn’t flat, with far more elevation change than expected. And once within Dyker’s leafy confines, it’s easy to forget that this was, indeed, the Big Apple: Where holes ran along the fences separating fairways from busy avenues, we were treated to occasional honking, car alarms, and what sounded like the local high school choir practicing for commencement.

Adjacent to the course is the CityParks Junior Golf Center, which in just two years has already welcomed more than 2,300 kids, aged 6-16. Touted as the first comprehensive golf facility in the U.S. exclusively for youth and entirely free, it has a six-hole course (all par-threes roughly 100 yards long), driving range, putting and chipping greens, and full-time instructors. Each group in the Mayor’s Cup played one of the center’s holes with a few of the students, local kids who were good players and very good ambassadors for the center and the game.

I’m hoping to play the city’s other courses soon and will share my thoughts. Till then, please send me your comments about NYC golf.