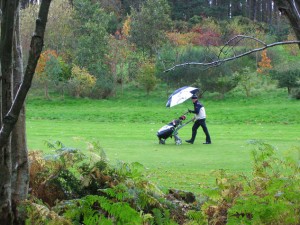 On the Golf Road Warriors site stories are categorized by days: Day 1 of the trip, Day 2, and so on. I propose we make a change for this Scotland adventure, the first of the GRW treks to go international. This posting should be labeled “Day 1-1/2” because it’s way too early in the morning—here in Scotland anyway—to be today and I’m pretty sure I’m done with yesterday. I think.

I’d forgotten about the not-so-friendly effects of jet lag when crossing the Atlantic to play golf. Flying to Glasgow from New York isn’t quite long enough to take an Ambien, so the “natural sleep” is only a few hours. One of my fellow warriors suggests the first day in Scotland be spent playing golf, topped off by a little drinking and a big meal, which will be followed by a slumber not unlike death. Good idea if one can manage to play anything resembling real golf right off the plane(s), which as my story from yesterday showed—admittedly impaired by the weather—was not possible. But I appreciate the sympathy.

First, Scotland is no place to work on a swing change. I recently received a lesson that has me trying to swing both shorter and slower, two alterations that are akin to the efforts North Korea’s Kim Jong Un would have to undertake to win the Nobel Peace Prize. After one successful round in a warm clime last week, I learned that for the time being I need at least a few minutes of pre-round warm-up to “groove” the new and improved motion.

On its best days, Scotland is a tough place to find a driving range. In the wind and cold and swaddled in rain gear and extra sweaters, even practice ranges don’t produce an authentic, normal motion. And on two hours of airplane sleep? Those are my combined excuses for the bad swings yesterday (Day 1). Which isn’t to say I didn’t make a few good ones, which I did and which prove to me that I’m on the right track. But I was reminded, yet again, that the track is a long one. 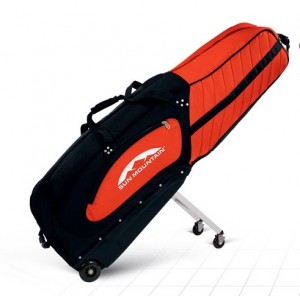 Second observation regards the Sun Mountain ClubGlider travel cover I brought along. Another fellow warrior, David DeSmith, has sung rhapsodic about the cover—which features a second set of wheels that drop down from the middle of the bag making it incredibly easy to roll around.

I used the bag for the first time to and from California last week and again to Scotland this week. The thing is amazing! Like David, I was able to stuff it with shoes, rain gear, and extra balls (although not, I fear, enough!). But it’s the pair of wheels that extend from the belly of the beast—and I’ve long compared traveling with a golf bag to transporting a dead body—that makes all the difference. Maybe this innovation isn’t quite as earth-shattering as water desalination or the iPhone, but it’s a big deal to golfers. Why did it take so long to discover?

Makes me think there are many other great ideas out there waiting to improve the golfer’s lot. (I’ll restrict my current thinking to that narrow niche; there will be more time for world-peace proposals later in the trip, I’m sure.) The ClubGlider gives me hope for the future of the game.

I just hope it can do something for the future of MY game, too.