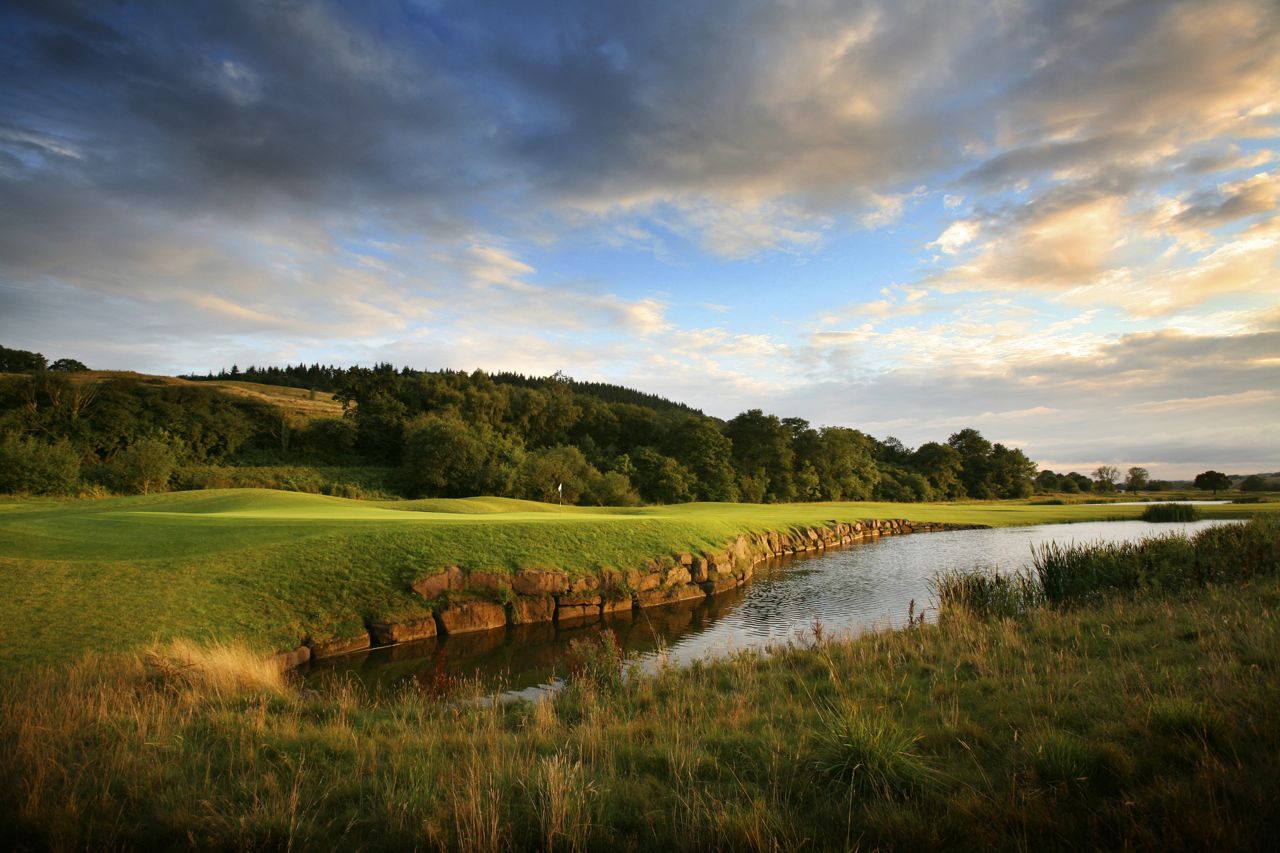 A month and a half ago, I played the Twenty Ten Course at Celtic Manor. It was my final round in Wales after touring the country for two weeks, playing golf and blogging about the courses—and other amenities—throughout the country. Wales is a wonderful golf venue, with many great links courses. But it’s still rustic compared to Scotland and even Ireland, with tiny winding roads and long drives between villages. If you’ve already seen Britain’s other golf centers (okay, centres), I strongly recommend Wales. It’s a throwback, what St. Andrews and Ballybunion and the other meccas must have been like 30 or so years ago before Americans “discovered” golf’s ancestral lands. You can still read my impressions of all the courses I played and saw at the VisitWales website (which is a bit slow, so my apologies in advance). In the meantime, I’m repeating below what I wrote after the round at Celtic Manor, reprising my thoughts in lieu of the pouring rain there now. And if you’re interested in other thoughts on the Ryder Cup, check this out, as well.

It must be said that the 2010 Course is not what most Americans (the Ryder Cup team excepted) come to Wales, or other parts of Britain, to play. It is not a links, but it doesn’t promote itself as one. This is an American-style course—wide fairways, water, few blind shots, and the sort of thick rough you wouldn’t be surprised to see at a U.S. Open. From the back tees, it will play very long, around 7,500 yards. And if there is weather—which there should be in Wales in early October—anything can happen.

But I still think it will prove a very good venue for the Ryder Cup. There are a number of risk-reward holes where players who hit it as long as the pros do will have to decide where to aim, what club to hit, where they want to play the next shot from, and is the green drivable.

Expect to see great drama in the stretch from 11 through 15—par 5, 4, 3, 4, 4—each hole with water along the fairways, sometimes on both sides. If the tee is up on 14, players can try to drive the green or get very close after carrying a pond in front of the tee while avoiding one edging the left side of the fairway. The next hole could be incredibly exciting, a par-four that probably will play about 370, but by cutting the corner and going over a copse of tall trees, the green, which sits considerably higher than the fairway, can be reached.

If matches go beyond those two holes, the final three are a long par four, a long par three (into the wind), and a long par five that ends—like the famous 17th at Valderrama, which figured in Ryder Cup history in 1997—with a small pond fronting an elevated green. Unfortunately, the pond has a fountain (perhaps my least favorite aspect of the course), but maybe they’ll turn it off during the matches. We can only hope.

For travelling golfers, the course is worth playing, even if it’s just to say you’ve challenged a Ryder Cup venue. The Celtic Manor will feel very familiar to those accustomed to the finest golf resorts in the world. It is big, modern, and comfortable, with very good service and excellent food. Be sure to eat in Le Patio, in the Manor House, an older building attached to the main resort through a series of underground passages and hallways lined with interesting paintings and photographs, some golf-themed, some not.

My favorite piece of art actually hangs in the 2010 Course locker room, where the walls are covered with historic prints from Ryder Cups past: There’s Tony Jacklin, here’s Byron Nelson, and there’s even a big black-and-white of Sam Ryder presenting the first trophy. You may have to search a bit to find my choice: It’s of Arnold Palmer and Jack Nicklaus some 45 years ago, and it looks as if Arnie is handing over a few dollars to Jack, possibly paying off a bet. You can’t miss the photo: It’s right above the middle urinal.