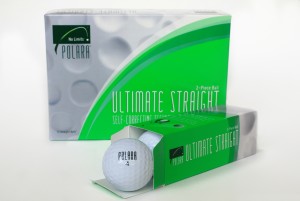 If you’re old enough, and know your golf history, you may remember the Polara ball, which used unusual dimple shapes and patterns to correct hooks and slices. This was in the mid-1970s, and using text-only ads in the back of magazines, Polara sold by the thousands.

That made some enemies in the golf business and at the USGA, which has always tried to limit the effects of equipment on the game. Acknowledging that the Polara did, indeed, correct its flight and go straighter, the ball was banned from tournament play. The company sued. In 1981, the USGA tried to stop Polara again, this time by enacting the “symmetry rule,” meaning a dimple pattern had to be symmetrical no matter how the ball was positioned. The company sued again, forcing the USGA to settle for $1.4 million, and the ball rolled off into the archives.

Polara is back, with new owners, new dimples, and a new design. And even straighter shots. 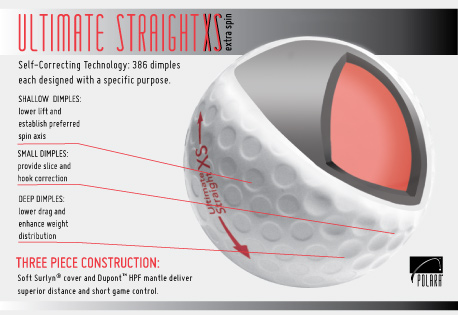 According to Dr. David Felker, the company’s director of technology, the new Polara can correct up to 75% of hooks and slices (sometimes more). Saying that golf is “only limited by physics,” Dr. Felker re-engineered the designs (right) and placement of the dimples: Their layout is still asymmetric, and the ball has to be precisely placed on the tee for the best results. Do it properly and the ball will move through the air with 20% less drag and 50% less lift, so it will fly straighter.

Obviously, the Polara is not for good players who like to work the ball or those set on following the letter of the law (it still doesn’t conform to USGA Rules). But for those who, according to Dr. Felker, simply want to have “more fun,” there are two models: the Ultimate Straight, a two-piece ball (which retails for $29.99), and the Ultimate Straight XS, for “extra spin,” a slightly softer three-piece ball ($39.99). Both come with a full satisfaction guarantee.

The ball can be ordered online from the company’s website, which also has test results, FAQs, and much more about the performance and history—ancient and modern—of the Polara.