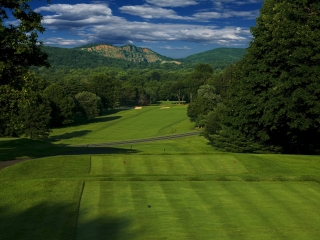 The 7th at Paramount captures the natural beauty of the Hudson Valley and the club will be a real boon to New Yorkers.

Why? Because all of these great courses are very private, most New York areas publics are super-crowded (and suck!) and unless your pal or dad is a member, good luck with that. It is not even a matter of cost – you might be able to easily afford to join many of these clubs, but they won’t let you.

Which is why these two opportunities, ne public, one private, are notable.

The Pound Ridge Golf Club is the first and only Pete Dye design in the region. Open since 2008, it has quickly taken a place among the very few high-end daily fee courses Big Apple denizens can reach, 40 miles from the city. As such, it has proven too popular and at peak times, tee times are tough to get, rates high and being New York, 40 miles can be really long way if there is traffic, which there always is. So the good news for locals and especially visitors is that the course has partnered with a wide range of hotels to offer packages including preferred tee times and lower rates, making it easier than ever to plan a New York golf outing on a quality course. Choices range from the Marriott Marquis in Ties Square and the flashy Mandarin Oriental Time Warner Center to local choices like Westchester’s Castel on the Hudson and Connecticut’s Hyatt Regency Greenwich. You can check out the whole list at the Pound Ridge site.

Perhaps more notably, there is a “new,” high quality private course you can actually consider joining as a New Yorker, a rarity these days, and you might be thanking yourself in 20 years if you check it out now. I say “new’ because the Paramount Country Club is a classic but largely forgotten Tillinghast course, until now known as the sleepy Dellwood Country Club. Located in New York’s Rockland County, just 30 miles from the city, the 1920 Golden Age gem was often ignored and unkempt until new owners bought it in 2009 and started pouring cash ($5 million so far) into improvements. The course renovation is being done by Jim Urbina, a Tom Doak design associate who is responsible for much of the work at Bandon Dunes. Despite the fact hat Urbina and Doak are architecture and history junkies, they were among the many ignorant of this club’s very existence. “You talk about a hidden gem, this course wasn’t listed in any book!” said Urbina.  “But when it’s done, Paramount is going to open people’s eyes.”

Founded in the Roaring Twenties by Paramount Pictures founder Adolf Zukor, who hired the legendary A.W. Tillinghast, the aptly renamed Paramount will immediately become a private club force to be reckoned with in NYC. And they are accepting members! Visit the club’s new website or or contact membership director Kyla Jones at (845) 634-4626 for more info.