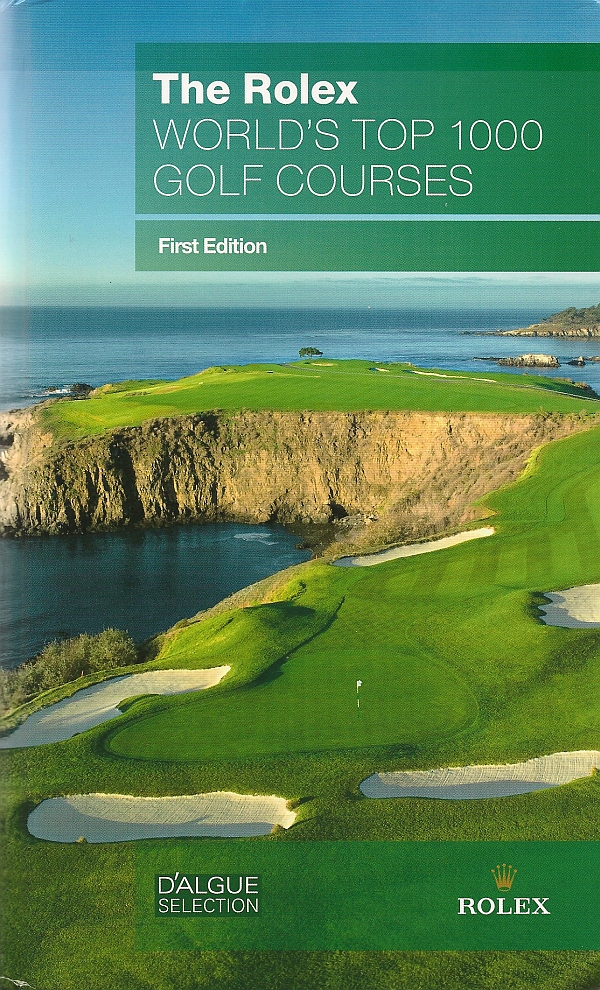 Maybe, maybe not. But even though it is brand new, just released, I will go out on a limb and say the first edition of “The Rolex World’s Top 1000 Golf Courses” is a pretty safe addition to any avid golf traveler’s library.

As for lineage, it is spawned by the folks who have long produced my favorite golf course rating tome, The Peugeot Golf Guide, which is an awesome book, but only covers Europe (and I mean covers Europe – top 100 courses in two dozen countries in painstaking detail, with pretty accurate quality ratings and every other bit of info you could need). I mentioned this book high on my list in a previous post on the Essential Golf Library, the top 10 books for the traveling golfer. I’d add the Rolex Top 1000 to that list.

Anyway, the concept and design is the same, the sponsor different, and the scope this time is the whole world. That means 362 courses right here in the US; 282 in Europe; 237 in Asia Pacific and 199 elsewhere.

At this point I need to qualify that while the journalists involved in doing these rankings are “anonymous,” and promised to remain “anonymous,” and I could not say if I was one of them, I may know quite a bit about the questionnaires and how the rankings were compiled and who was involved. So with that insider perspective, I will note that the caveat about the Top 1000 is that the selection of best courses is an imperfect science and I think the book seeks to cast a broad net: for instance, you could easily argue that the very best course in the Mariana Islands is not among the Top 1000 on earth, period, but if you omitted it, there would be no chapter on the Mariana Islands. So the book seems to prefer geographic diversity over all else, and in some ways that’s a good thing.

For $35 it is a lot of book, at over 1300 pages, and an easy reference, here and abroad. At the end of the day you need to ask yourself, if a trip comes up to Pakistan or Poland or Guatemala, do you have another golf book in your house that will tell you what courses to play?

The downside of this, or any book in the digital age, is how fast it can become obsolete – the China chapter does not even include the new Mission Hills Hainan, the second largest golf resort on earth. And I have to say, I think the ratings for the original Mission Hills, the largest resort on earth, are quite low, with the highest being 85 and the Faldo course, , arguably the resort’s best, getting just an 80? But If I want to dissect each of the 1000 entries, this blog is going to get too long, so I will stop there.

As far as the courses themselves, they are mostly top selections and while every rating on any list is arguable to a degree, they re generally on the ball. I opened the book at random for fun and actually managed to get lucky and catch a course I have played, Terme di Saturnia at a famed health and mineral springs spa in Tuscany. I think the rating (75) and comments were quite fair and accurate, along with the ancillary information and especially the map, because courses like these are hard to find. So based on my highly unscientific survey of one random course, this book is pretty accurate. I don’t want to talk much about the domestic courses where I may know people involved.

Before I move on, I’d like to make a shout out to my loyal readers in Germany. Ein Prosit! Go Martin Kaymer! You guys get 13 of the world’s top 1000 courses, including two that get relatively high 90 rankings, Hamburger-Falkenstein and Nick Faldo’s Sporting Club Berlin design. Since I have never played golf in Germany (though I have consumed a lot of beer and weisswurst), I’d like to hear from you: are these really the two top layouts in your country?

Each course in the book is ranked on a 100 point scale, and of the 1000 courses just 15 got perfect 100s. Since everyone in the golf business loves Top “fill in the blank” Lists, here are those perfect 15:

So as you can see, the book is going to a) ignite debate and b) cover lots of courses you’ll never be able to play. But don’t let that stop you from buying it. Golf writers need to make a living too!