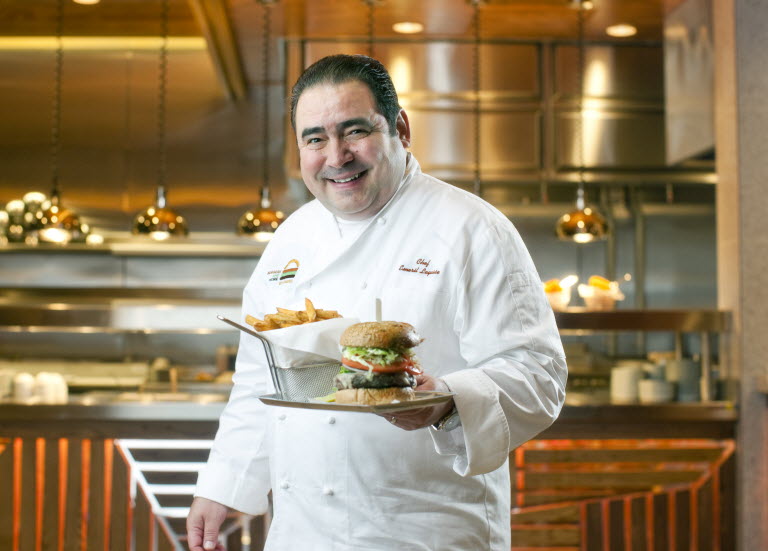 Emeril Lagasse is America's favorite chef - and a hell of a golfer.

Lots of celebrity chefs play golf. In fact, one thing I’ve learned writing regularly on both food and golf is that lots of chefs play, famous or not, and they almost always give the same reason: it is one of the only chances they have to get away from the restaurant, away from their cell phones, and actually outside period, for four to five hours.

Some of the better known golf junkie chefs out there include Todd English, Emmy-winner Ming Tsai, Tom Colicchio, Mario Batali, Bobby Flay and Nobu Matsuhisa – who used to do ads for Callaway.

And then there is the most famous of all the celebrity chefs, the force of nature himself, Emeril Lagasse.

Famous for his trademark exclamation “Bam!” as he spices it up, Emeril is much more than just a chef, he is an entertainer, philanthropist, author and entrepreneur. Best known for his twin New Orleans fine dining flagships Emeril’s and Delmonico, he runs a dozen restaurants from Louisiana to Las Vegas to Bethlehem, PA; he’s churned out more than 20 cookbooks; has a line of cookware and jarred sauces; hosts several television and radio shows; and unlike any other chef ever, he even had a short lived network sitcom.

He also loves golf, and is known for both regularly playing in and helping to cater the Wednesday pro-am at the Zurich Classic in New Orleans. It’s no surprise that this event was voted “Best Pro-Am” by the PGA Tour players themselves, mainly for its incredible food.

“A couple of weeks ago I played in the pro-am at the Viking Classic [Mississippi] – I made two birdies by the way,” Emeril was quick to tell me. “I wish I had more time to play. The appeal to me is that I’m free, don’t need to have my cell phone on for four hours. I can blank out responsibility. I love the game, the beauty.”

“It’s an interesting story how me and a bunch of my chefs got connected with golf. We were on a trip in Hawaii, many years ago, and we had one day before we had to come back to the Mainland, and we had worked our tails off for about four days getting these dinners done. I said ‘Guys, we have one day left, what do you want to do? We can take a helicopter ride, go to the beach, whatever you want to do, we can go ride horses.’ And they said ‘you know chef, we go to all these fabulous places with you, and they all have great golf courses, but we’ve never played golf, why don’t we go golfing?’ So the next morning I get the pro on the phone. We don’t even have shoes or socks, never mind clubs. We go to the pro shop, he’s nice enough to suit us up. I think it took six and a half hours to play one round, and the groundskeeper still probably has our pictures up on the wall because we tore the place up. That’s how the whole golfing thing started, about 15 years go. I came home, I bought clubs, started playing. I didn’t realize when I met my wife that she had taken golf in college. I was like ‘Man, what am I missing here? I didn’t have golf in college, I had ice carving.’”

“Now I have my own golf tournament for scholarships for my alma mater, Johnson & Wales, and every year we put four new students through college based on this endowment I started. It’s in its ninth year now. I’ve played a lot of great TPC courses, a lot of courses in Hawaii, but there is something about the Newport Country Club that is pretty spectacular.” The very private Rhode Island course he calls his favorite is also the venue for his annual charity tournament.