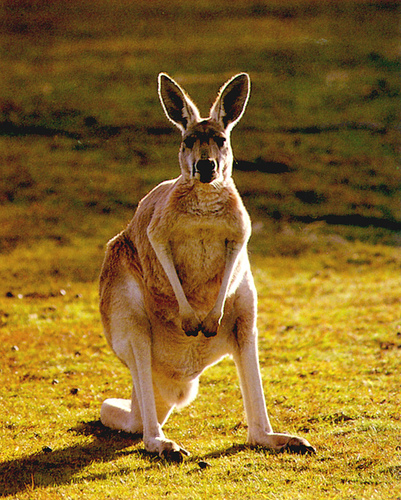 Okay, this kangaroo is not Stuart Appleby, but they are both Australian and I didn't have any pictures of Appleby, who just made golf history by shooting 59!

I must be psychic.

Just a few short weeks ago, I wrote a congratulatory blog to Paul Goydos for becoming only the fourth man in PGA Tour history to shoot 59.

Last week I wrote a few blogs about how much fun it is to play in a PGA Tour pro-am, which I have done several times, including the last Viking Classic in Mississippi, where my playing partner was Stuart Appleby.

Yesterday the Aussie, who had not won on Tour (or broken 65) in four years, shot the round of his life to close out the new Greenbrier Tour event with, you guessed it, a 59, becoming the fifth members of golf’s most elite club and only the second (Duval) to do it on Sunday for the win.

That is my round about way of saying that my blogs predicted this and I am a mad golf genius.

On the other hand, if you had asked me after my pro-am round, would Stuart Appleby ever shoot 59, or even win again, I would have said no. No offense Stuart, but your game just was not on that day.

I also had the pleasure of playing with the original Mr. 59, Al Geiberger (he was the celebrity pro emeritus or some such thing at the Tom Doak-designed private Stone Eagle golf course and community in Palm Springs). After trying my hardest all day, I finally outdrove Al around the 16th hole- did I mention he was nearly 70 years old – by about a yard. He wasted no item in assuring me that he had hit 3-wood to my driver. Guy’s still got game.

But whatever I thought of Appleby’s pro-am performance, apparently his game was on Sunday because he did, as I mentioned last time, what Tiger Woods, Jack Nicklaus, Hogan, Snead, Watson, Palmer, Player, et al have been unable to do, ever, golf’s hardest feat.

To put this in perspective, before 2010, The Summer of 59, only three guys had ever done it, and each was separated by roughly a decade. It was another decade-plus between the third and fourth, but now, like no hitters in baseball this year, they are raining from the sky. I sure hope I am next.

Of course, many experts, including Pete Dye, Jack Nicklaus, etc would see this as proof of their passionately held theory that unrestricted new technology and the USGA’s refusal to rein in massive distance jumps in driving make the game much easier, as supported by these statistical anomalies, but that is an argument for a different day.

I have a completely different theory.

If I am not psychic, the other possible answer to my recent odd experiences is that I am a golf lucky charm. The day after I played in a pro-am with Kevin Streelman, and up and comer still winless on Tour, he shot the low score at the Tahoe Reno Open and stood in first place, not something he is used to. The very next day after playing with me. Coincidence? Several months after playing with me, Appleby, who had lost most of his exemptions and whose career was in a bit of a tailspin, shots the lowest round in PGA Tour history to win and break the long slump. Several months after playing with me. Coincidence? I think not.

One Response to “The Summer of 59”